Ancient Inscription Belonging To Kakatiya Dynasty Discovered In AP; All You Need To Know

The Kakatiyas inscription from the 14th century was noticed by senior archaeologist, Dr. E Sivanagireddy when he was in the area at Kodandaramaswamy temple 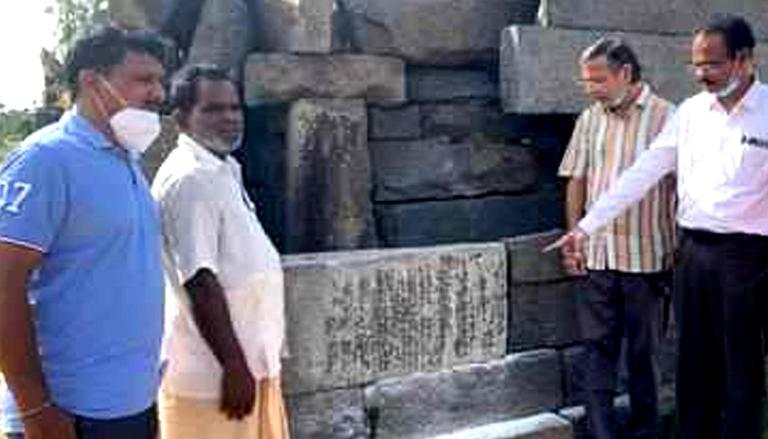 
A historic inscription from the era of the Kakatiyas dynasty was found at Motupalli village in Prakasam District of Andhra Pradesh. The Kakatiyas inscription from the 14th century was noticed by senior archaeologist, Dr. E Sivanagireddy when he was in the area at the dilapidated site of Kodandaramaswamy temple as a part of the 'Preserve Heritage for Posterity' tour.

The historical significance of the script, as mentioned by the Epigraphy Branch, is paramount. The inscription has been deciphered as a record of the gifted land Tiruvidaiyattam. It was offered for providing offerings to God Rajanarayanapperumal in Desi-Uyyakondan-Pattinam, now Mottuppalli, by Cattanthai-Cemmanadiyal-Valumpothalakiyan alias Patinenbhumi-Vanikaratittan. Additionally, Motupalli was also an international port town during the medieval period. The land was gifted to conduct a major Tiruvidaiyattam festival in the temple of Rajanarayanapperumal for the last Kakatiya Emperor Prataparudra Deva, Shivanagireddy added to his statement.

According to confirmation provided by Dr. K. Muniratnam Reddy, Director, Epigraphy branch, Archaeological Survey of India, Mysuru, Tamil Grantha script and revealed the content from about 813-year-old. Interestingly, Motupalli was mentioned as Desi-Uyyakondan-Pattinam.' The inscription slab was fitted into the west side wall of the temple during the 16th century as part of renovation works.

The Kodandaramaswamy temple is located in the outskirts of Motupalli in the Prakasam District, where Dr. Sivanagireddy was accompanied by R. Dasaratha Reddy, President of Motupalli Heritage Society. According to the archaeologists, the inscription was written in Tamil and Grantha script and dates back to the Saka 1230 (1st August 1308 C.E) Kilaka, Vaisaka, Su. of the reign of Kaktiya Rudra Deva II.

The second most important inscription found at Motupalli

It is the second most important inscription found at Motupalli. The previous inscription that was discovered in Motuppalli was said to be issued by Kakatiya Ganapatideva, which dated back to 1244 AD. It was known as the Abhaya Sasana, which means a charter that insures the life of goods before setting them to sail in ships. During his speech, Dr. Reddy said the inscriptions bear prime significance and have often altered local people to inform the authorities in case they find anything sensitive.