Former Maharashtra Home Minister Anil Deshmukh refused to appear before the Enforcement Directorate on Monday in connection with a money laundering case. 
Ex-Maharashtra Home Minister Anil Deshmukh refused to appear before the Enforcement Directorate on Monday in connection with a money laundering case. This development comes after he approached the Supreme Court seeking protection from 'coercive action'. Currently believed to be in Delhi, Deshmukh had skipped the ED summons twice earlier on May 25 and May 29 respectively citing the threat of contracting COVID-19 owing to the fact that he suffers from several age-related ailments.

Meanwhile, his son Hrishikesh Deshmukh has been summoned by the central agency on Tuesday. In his latest letter addressed to the ED, the NCP leader expressed apprehension that the law of the land is being circumvented and the investigation is not fair. Thereafter, Deshmukh urged it to await the decision of the apex court before summoning him once again.

Here is a copy of Anil Deshmukh's letter to ED: 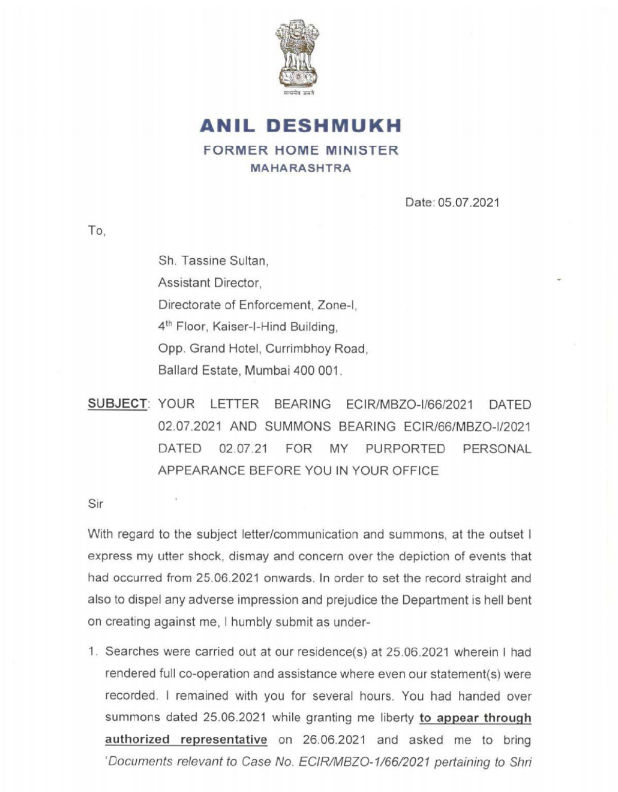 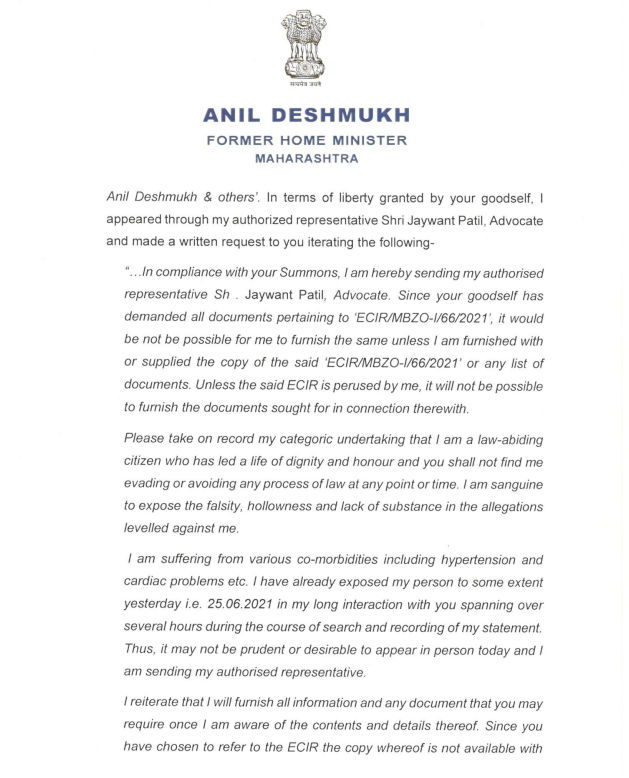 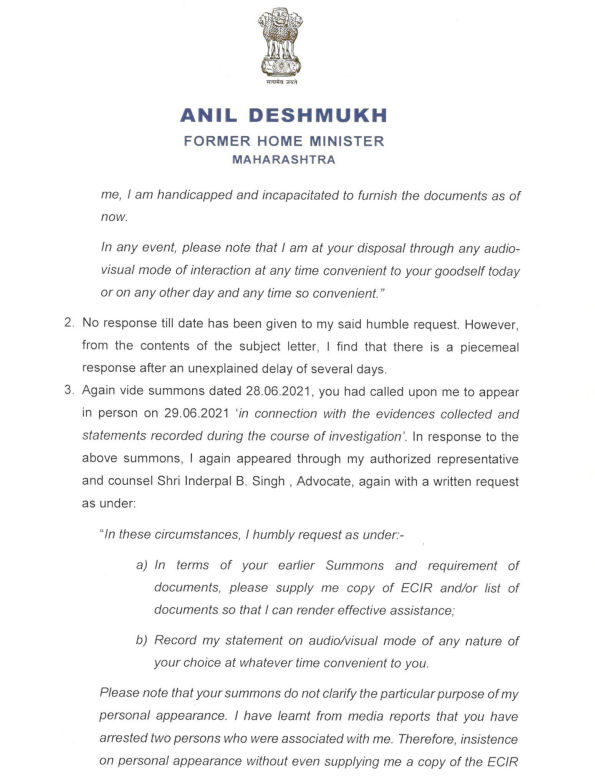 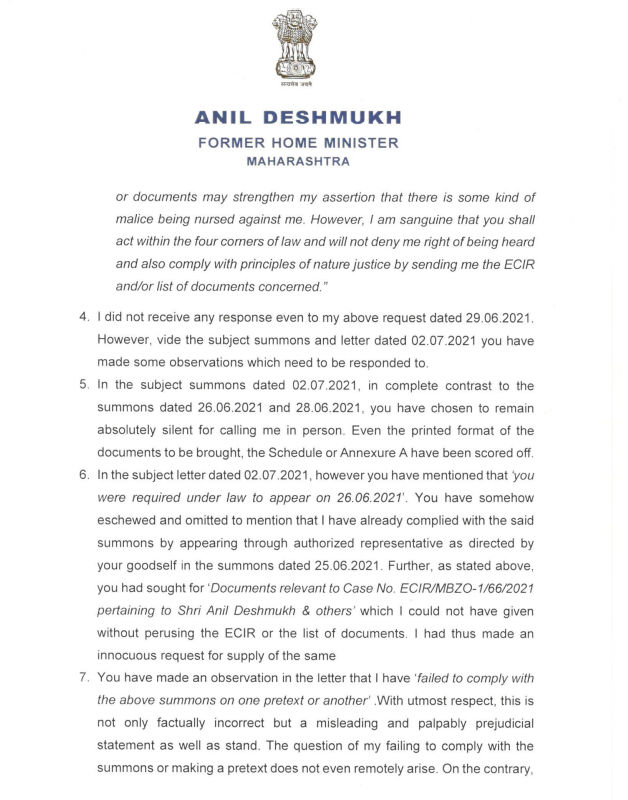 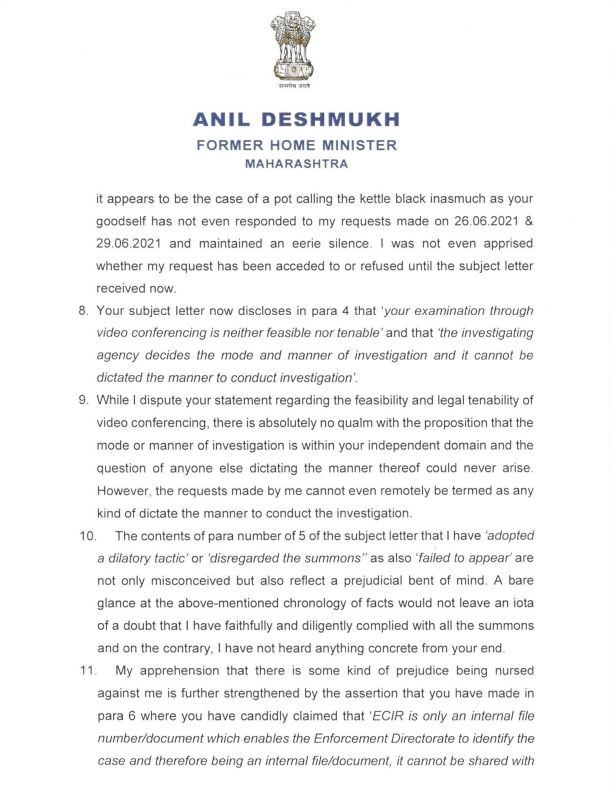 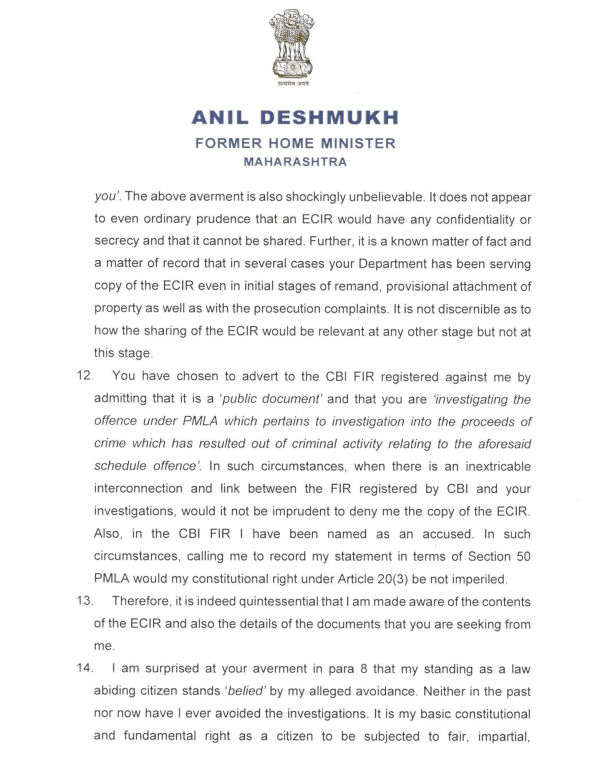 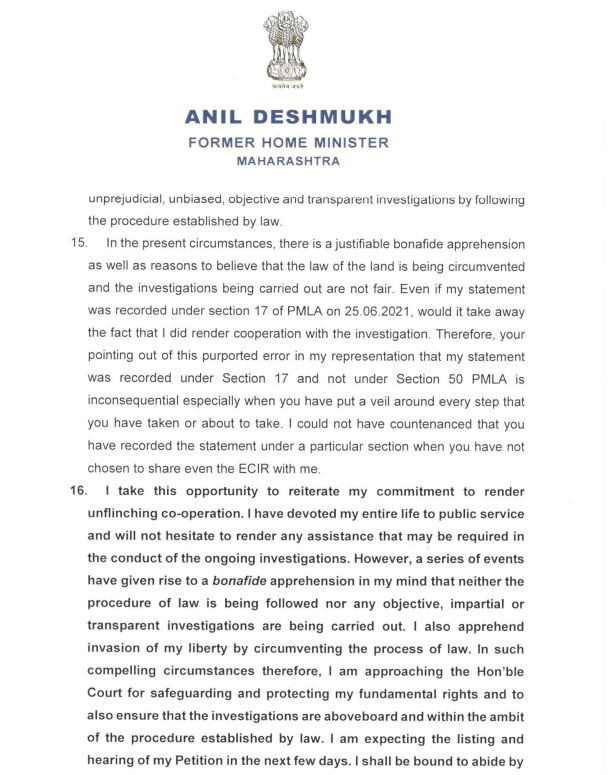 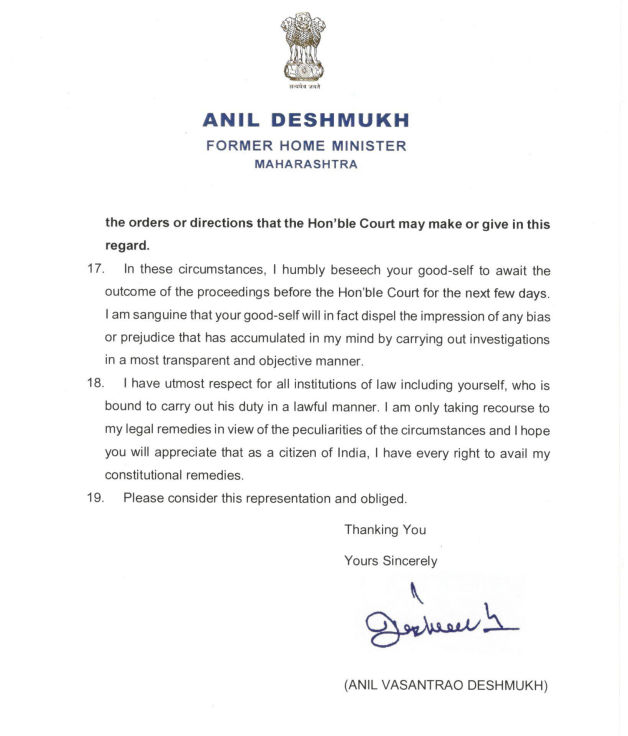 The controversy came to the fore on February 20 when ex-Mumbai Police Commissioner Param Bir Singh levelled serious 'extortion' charges against Anil Deshmukh. In a letter addressed to Maharashtra CM Uddhav Thackeray, Singh refuted Deshmukh's remarks that his transfer was due to serious lapses in the Antilia bomb scare case. Moreover, he alleged that the NCP leader had asked Sachin Vaze to extort Rs.100 crore per month from 1750 bars, restaurants and other establishments in Mumbai. After the SC directed the CBI to conduct a preliminary enquiry, Deshmukh stepped down as the Home Minister on moral grounds and was replaced by Dilip Walse Patil.

The ED filed an ECIR against Anil Deshmukh on May 11 under the Prevention of Money Laundering Act for allegedly obtaining illegal gratification which was based on the corruption case registered by the CBI. On June 25, the central agency raided Deshmukh's residences in Nagpur and Mumbai in connection with this case. A day later, it arrested the NCP leader's personal secretary Sanjeev Palande and personal assistant Kundan Shinde who have been remanded to its custody till July 6. As per the central agency, Vaze gave the money to Shinde which was subsequently routed to Deshmukh's Nagpur-based charitable trust through shell companies in Delhi.