Article 370 Scrapped: India Responds To China, Tells It That J&K Is An Internal Matter

Ministry of External Affairs responded to China's serious concerns over the situation in Kashmir, asking them to stay away from India's internal matter.

Ministry of External Affairs responded to China's serious concerns over the situation in Kashmir, asking them to stay away from India's internal matter.

Jammu & Kashmir Reorganization Bill 2019, is an internal matter concerning the territory of India. India doesn't comment on the internal affairs of other countries and similarly expects other countries to do likewise 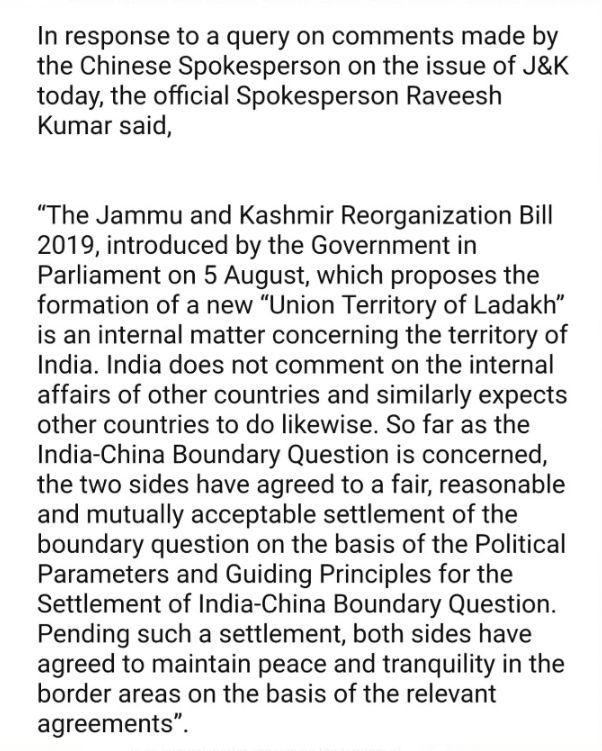 China on Tuesday asked India and Pakistan to exercise restraint and avoid actions that "unilaterally" change the status quo and exacerbate tensions between the two countries.

"China is seriously concerned about the current situation in Kashmir," Foreign Ministry spokesperson Hua Chunying said in a written response to media queries about the militaries of India and Pakistan exchanging fire along the Line of Control and the Indian government's move to revoke Article 370 which gave special status to Jammu and Kashmir.

"China's position on the Kashmir issue is clear and consistent. This issue is a legacy of history between India and Pakistan, which is also the consensus of the international community," Hua said, without directly referring to revocation of Article 370 by India.

"The parties concerned should exercise restraint and act with caution, especially to avoid actions that unilaterally change the status quo and exacerbate the tension," she said.

"We call on the two sides to peacefully resolve relevant disputes through dialogue and consultation and safeguard regional peace and stability, she said.

On July 26, China said India and Pakistan should peacefully settle the Kashmir issue and other disputes through dialogue and expressed its support to the international community, including the US, in playing a "constructive role" to improve ties between the two countries.

It exempts Jammu and Kashmir from following the Indian Constitution except for Article 1 and itself. It also restricts Parliament's legislative powers in Jammu and Kashmir. It was passed in the Constituent Assembly on May 27, 1949 and is the first article of Part XXI of the Indian Constitution. The heading of this part is ‘Temporary, Transitional and Special Provisions’