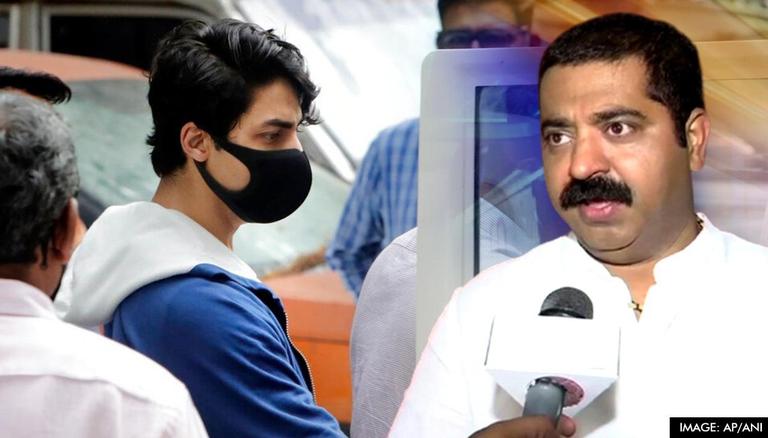 
Breaking the silence on Aryan Khan's arrest in the Mumbai cruise drug bust, BJP MLA Ram Kadam on Wednesday, 'prayed' for the starkid's bail in today's court hearing. Claiming that bail was a fundamental right under the Constitution, he said Aryan Khan's arrest was not a personal one, but under the war against drugs. He added that in 'new India' all were treated equally and hence Aryan must use this opportunity to fight against drugs, inspiring youth to wean off drug menace. 23-year-old Aryan Khan - Shah Rukh Khan's son and seven others have been arrested in an NCB drug bust at Mumbai's international cruise port on October 2

On 14 October, a Mumbai sessions court reserved its order on the bail application of Aryan Khan, Munmun Dhamecha, and Arbaaz Merchant.  During the proceeding, Aryan Khan's lawyer Amit Desai reiterated that any person found with a small quantity of drugs has the right to file for bail as long as he cooperates in the investigation. The NCB has opposed Aryan's bail citing chats between him and some drug dealers. The sessions court will pronounce its verdict on October 20.

Desai said, "As a citizen of this country, there is no debate or doubt that the entire world is fighting against drugs. The chain is from dealer to peddler and peddler to consumers. But there is a need to learn the legislature chain. We are dealing with the bail application and without affecting the investigation, bail can be granted". While Aryan and Arbaaz are presently lodged in the Arthur Road Jail, Munmun is lodged in the Byculla Jail.

Opposing claims that Aryan Khan was not in possession of drugs, ASG Anil Singh stated the recovered drugs were meant for both the accused. NCB claimed that Khan had said the quantity of the hard drug cannot be for personal consumption and the same was seen in the WhatsApp chats of the accused persons. He added that peddlers and foreign nationals were in touch with Aachit Kumar, who was linked to Aryan Khan.

On October 2, NCB busted a high-profile drug party on Cordelia cruise ship en route from Mumbai to Goa, and seized small amounts of Cocaine, Mephedrone, Charas, Hydroponic Weed, MDMA and cash Rs. 1,33,000. As per sources, NCB Zonal Director Sameer Wankhede, along with his team, boarded the cruise ship in the guise of passengers after receiving a tip-off about the purported drug party from the CISF.  According to NCB officials, these people, along with about 1,200 people on board the ship, were heading to deep sea for a sundowner party. Eight people - Aryan Khan, Arbaaz Merchantt, Munmun Dhamecha, Nupur Sarika, Ismeet Singh, Mohak Jaswal, Vikrant Chhoker, Gomit Chopra were arrested, while six others were let off by the NCB. As of date, 20 people have been arrested by the NCB based on nine independent witnesses including -  Manish Bhanushali and K.P Gosavi.