For Assam's boxer Lovlina Borgohain who is an Olympic contingent, CM Himanta Biswa Sarma flagged off a bicycle rally which was joined by opposition leaders. 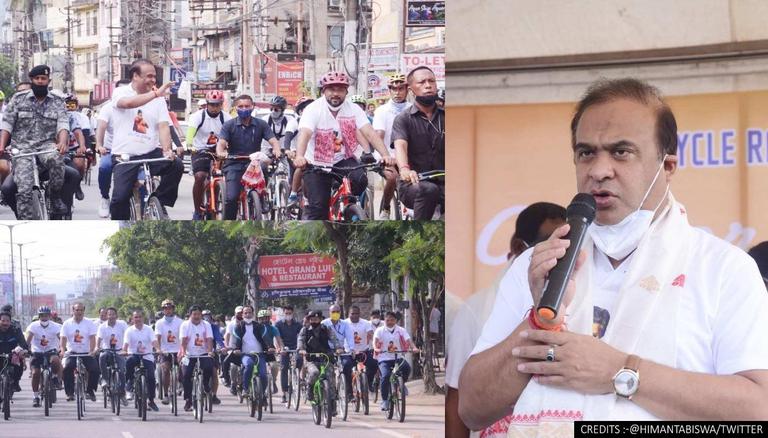 
In a move to support state boxer, Lovlina Borgohain in her quest for glory at the Tokyo Olympics, all the political leaders of Assam came together on Wednesday morning for ‘Go for Glory- Lovlina’ bicycle rally. Chief Minister Himanta Biswa Sarma flagged off the event and even participated in it. The event took place from Dispur Lastgate to Nehru Stadium in Guwahati. On-ground visuals show leaders riding bicycles for the 7 km rally to 'support their daughter'.

"Both ruling party & Opposition have come together for this 7 km cycle rally to support their daughter," added Chief Minister Himanta Biswa Sarma.

The bicycle rally was organised by BJP MLA, Biswajit Phukan who is the legislator of Lovlina's home constituency- Sarupathar.

Live from ‘Go for Glory- Lovlina’ bicycle rally. To wish success to boxer Lovlina Borgohain in the Tokyo Olympics 2021, I took part in the bicycle rally from Dispur Lastgate to Nehru Stadium in Guwahati. https://t.co/tph2HrQbG3

Expressing his joy, CM Sarma also wrote 'We are so proud of Lovlina who is the first female athlete from #Assam to represent India' on his Twitter account.

We are so proud of Lovlina who is the first female athlete from #Assam to represent India at the #Olympics & the second boxer after Shiva Thapa to participate in the same from the state.

May you continue to bring glories to the nation. 3/4#Cheer4India #Olympics2021

Moreover, on Tuesday (July 20) the Assam Assembly had unanimously resolved to support and motivate state boxer Lovlina Borgohain in her quest for glory at the Tokyo Olympics, which gets under way on Friday. A ‘congratulatory’ proposal was also placed in the House by parliamentary affairs minister Pijush Hazarika and both Opposition and ruling party legislators welcomed the proposal and resolved to support the lone representative from Assam at the Tokyo Olympics 2020.

Standing against all odds, Borgohain has reached Tokyo Olympics after facing a difficult situation in training amid the COVID-19 pandemic. Single-handedly carrying Assam's hopes, Lovlina is expected to win for India. India also has one of the largest boxing contingents in the Tokyo Olympics, with nine pugilists. India’s Boxing matches are scheduled from July 24, 2021.

Tokyo Olympics 2020: When and where to watch the games

Tokyo Olympics 2020 Opening Ceremony will be held at the National Stadium. Viewers in India who want to catch the Tokyo Olympics 2020 opening ceremony can watch the coverage from 4:30 pm IST on 23rd July. Sony Sports Network will broadcast all events of the Tokyo 2020. Sony TEN 1 and Sony TEN 2 will feature English commentary while Sony TEN 3 will have Hindi commentary. The coverage of the games will also be available on the network’s streaming platform SonyLIV.

India’s biggest ever contingent at the Olympics

India is sending its biggest ever contingent for the Tokyo 2020 Olympics. Earlier, Indian Olympics Association (IOA) Chief Narinder Batra, during PM Modi's interaction with India's Tokyo-bound athletes, had revealed that India will be sending its biggest team for the event. According to Batra, the Olympic squad for the sports extravaganza in Tokyo will be 228-strong, including 119 athletes. Out of the 119 athletes, 52 are women and 67 are men. India had sent a total of 117 athletes for the 2016 Rio Olympics, which was earlier the biggest ever.