On June 20, Union Home Minister Amit Shah called Assam CM Himanta Biswa Sarma to enquire and analyse the current situation in Assam due to the floods. 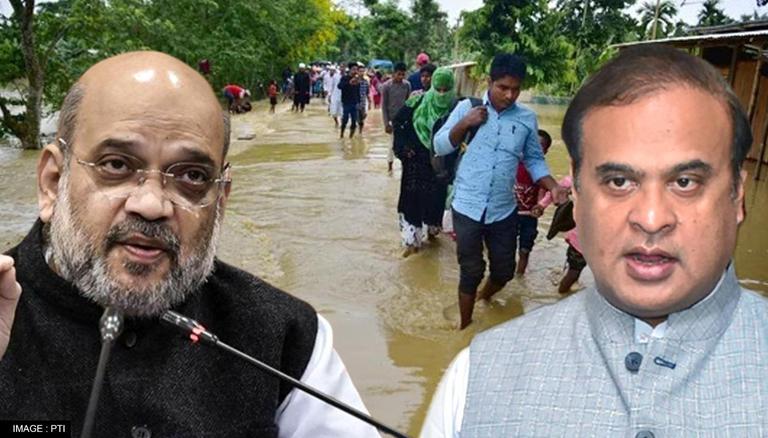 Assam CM Himanta Biswa Sarma took to twitter to thank the Home Minister for his continuous inquiry regarding the critical flood situation in Assam. The Union Minister also stated that to check the extent of the damage caused by the floods, a team of officials will soon be sent by the Ministry of Home Affairs.

"Hon HM Shri Amit Shah Ji called twice since morning to enuire about the flood situation in Assam. He informed that a team of officials shall soon be sent by Ministry of Home Affairs to assess the damages caused by the natural calamity," the CM stated. "Grateful to HM for his help," he added.

Hon HM Shri @AmitShah ji called twice since morning to enquire about the flood situation in Assam. He informed that a team of officials shall soon be sent by Ministry of Home Affairs to assess the damages caused by the natural calamity.

Grateful to HM for his help.

Prime Minister Narendra Modi on June 18 spoke to CM Sarma and inquired about the flood situation which has claimed at least 54 lives. Taking to Twitter, the Assam CM on June 18 informed that PM Modi had called him and enquired about the flood situation in the state. Further, CM Sarma said that PM Modi expressed his concerns over the hardships being faced by the people due to the floods and landslides and that the Prime Minister assured the central government's help to the state.

Assam CM Sarma chaired a review meeting on the ongoing flood situation in the state on June 20. He discussed the flood situation and disaster management preparedness with deputy commissioners and other civil servants. Seven out of 35 districts in Assam have been flooded and for the fourth consecutive day, the Indian Army is carrying out relentless rescue operations.

Notably, CM Sarma has directed all district administrations to ensure adequate food supplies in all flood-affected districts, that relief operations should not be jeopardised, and that all Deputy Commissioners should submit requests to the Personnel Department for additional human resources for relief operations.