The harvesting is over, the granaries are filled and Assam is all set to celebrate 'Bhogali' or 'Magh Bihu' - the festival of feasting and season of plenty. 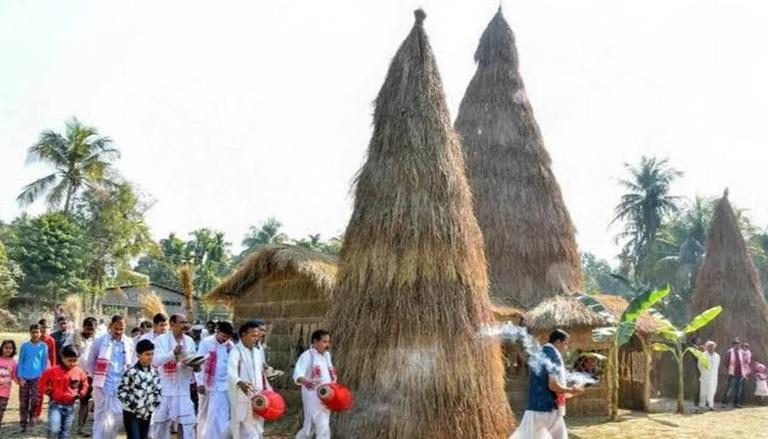 
The harvesting is over, the granaries are filled and Assam is all set to celebrate 'Bhogali' or 'Magh Bihu' - the festival of feasting and season of plenty.

Men, children and women, in particular, are busy in community fields of the central Assam district of Morigaon along with the rest of the state, preparing for the three-day festival beginning on Saturday evening.

It starts with feasting called 'Uruka', as communities cook and eat together to celebrate the harvest they have reaped.

A highlight of the festivities is the painstakingly created 'bhelaghars' (hay and bamboo structures) depicting various themes ranging from human-elephant conflict, historical monuments and social issues, among others.

It is in and around these ‘bhelaghars' that the community feasts are held and the next day, those are set ablaze along with 'mejis' (cylindrical structures), also made of hay and bamboo, on the day of ‘Bhogali Bihu’, as a ritual to appease the fire god.

Women in most of the 506 villages of the district have come forward with enthusiasm to construct the 'bhelaghars'.

"Every year, the youths get together to make the hay structures for Bihu. But this year, women decided to build a 'bhelaghar' in our neighbourhood where we can organise the community feast,” Bina Konwar of Duimari Kopili Self-Help Group, told PTI.

Women associated with several SHGs in these villages are busy preparing sweetmeats to be served during the festival, including different types of 'pithas' (rice cakes made with jaggery).

The 'pithas' and 'laroos' (laddoos) are served to our guests and "we also take these to the 'bhogali melas' (fairs), which are held in the nearby towns and even in Guwahati before the festival,” said Monika Bordoloi, a resident of Bhurabandha village.

"The earnings from these fairs are good, and we look forward to participate as people in the urban areas love our delicacies,” she added.

A district official pointed out that women in most villages are part of several SHGs, and they form the backbone of the rural agrarian economy of Morigaon.

Another highlight of the festival in the district is the buffalo fight at Ahatguri and Baidyabori.

However, following a Supreme Court directive against holding such events, the villagers organise a token symbolic fight to mark the occasion.