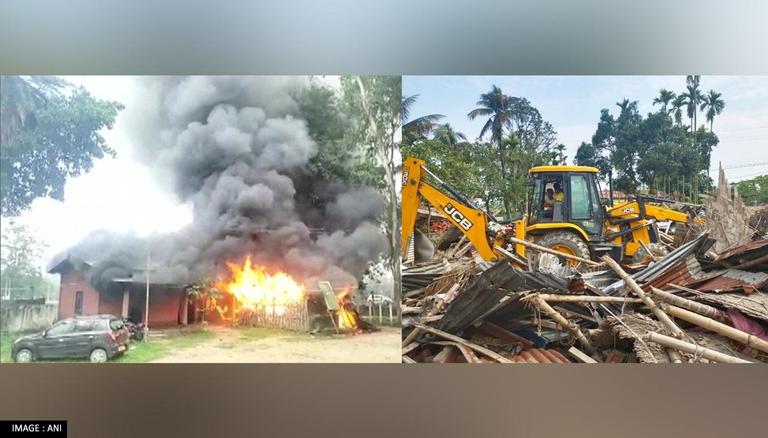 
After a mob set Batadroba police station on fire in the Nagaon district of Assam over the alleged death of a man in police custody, the district administration on Sunday demolished the residences of five families allegedly involved in the fire incident. JCB machine was brought to demolish the houses.

This comes following the Assam police statement that they would take strict action against those involved in setting the police station on fire. Assam Police released the statement pertaining to the case and said, "We will act even tougher against elements who think that they can escape the Indian justice system, by burning down Police Stations. We will simply not allow this. Let this be a warning to all antisocial/criminal elements." In addition to that, the Superintendant of Police of the region, Leena Doley while speaking to reporters regarding the fire incident, said, "We are investigating the allegations. Three have been detained among persons who attacked the police station. Two police personnel have been injured in the attack."

It is pertinent to mention that members of the crowd have alleged that the cops killed Safiqul Islam, a fish-seller after he refused to pay the bribe amount. However, Assam police stated that they had released Safiqul and handed him to his wife.

Following the alleged custodial death of Safiqul Islam in Assam's Batadroba, a mob turned violent and angry locals vandalised the police station by setting it on fire and also assaulted cops. According to the reports, Safiqul Islam was allegedly picked up by police on Friday when he was on his way to the market to sell fish. The villagers alleged that the police demanded Rs 10,000 from him and when he refused to pay, he was taken to the police station on May 20. Later in the night, he was admitted to the hospital in a very critical condition where he succumbed to his injuries.

However, the Assam Police reported that a man identified as Safiqul Islam, aged 39 years old was brought to Batadrava Thana on May 20 at 9:30 pm over a complaint of him being drunk and lying on public road. It was further stated that Safiqul was booked after a medical examination and later he was released the following day or handed over to his wife. The statement added that his wife offered food and water and after a while, the man complained of sickness and was taken to two hospitals, one after another where he breathed last.

Taking serious note of the issue, the Police said in the statement, "We take this unfortunate death very seriously and have put the OC on suspension and rest of the staff of the Batadraba thana Closed. If there is any foul play at our end, we mean to find that and punish the guilty according to the law. No two thoughts."

'It's not a simple action-reaction incident': Police

Providing details of the mob attack, the police raised questions over the attack as a few local people including women, men, young and old took the law into their own hands and burnt down the station. "But the preparedness with which the attackers came, and the ferocious attack they staged on police hinted at an organised plot," the police stated.

"We don’t think these are grieving relatives of the dead, but as we have identified, they were bad characters and their relatives with criminal records- records that were there within the thana. Proof, incrementing evidence all burnt down. So don’t think this is a simple action-reaction incident. There's much more to it. We'll get to the bottom of this", the police said.