Australia-India Must Navigate Together To Re-shape Common Goal In Indo-Pacific: Penny Wong

Australian Foreign Minister Penny Wong, on Monday, underscored that the interests of both Canberra and New Delhi in the Indo-Pacific region are common. 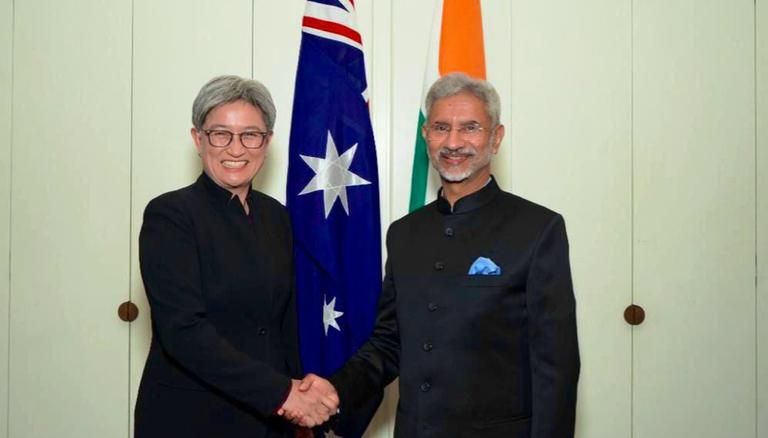 
Australian Foreign Minister Penny Wong, on Monday, underscored that the interests of both Canberra and New Delhi in the Indo-Pacific region are common and, therefore, both countries can navigate in the area together to accomplish the shared goal. While addressing a press conference with External Affairs Minister S Jaishankar in the Australian national capital, she stressed both nations agreed that the Indo-Pacific region is being reshaped and noted it is the "common goal" that has helped in ensuring stability and prosperity in the region.

Took stock of the steady progress of our Comprehensive Strategic Partnership, including important Ministerial visits in recent months. pic.twitter.com/0zNfhA2ZgN

"India and Australia are comprehensive strategic partners. We are Quad partners. We partner in many other ways," she said after both ministers held the 13th Foreign Ministers' Framework Dialogue (FMFD). "Most fundamentally, we share a region, the Indio Pacific region. We got a shared interest and shared ambition which is the main reason for being stable and prosperous. Both countries are not required to choose sides but make their own sovereign choices," the minister said. Further, she said New Delhi and Canberra neither want any country to dominate in the region nor want to be harassed by anyone. Notably, she was pointing at China's soaring interference in the Indo-Pacific region, which resulted in tension among the West and its allies about the future of the region.

"We both recognize that our region is being reshaped both economically and strategically. Our partnership is a demonstration that we understand that this period of change is best navigated together," she added. Underlining the importance of partnership with India, Wong said, "For Australia, this partnership (India), is a critical part of shaping the region we want." She said both countries have agreed to continue to deepen the relationship, including the diplomatic footprint in each other's country. "We are looking to open a consulate general in Bengaluru, in the heart of India's technology industry sometime next year," she added.

It is worth mentioning India and Australia enjoy a good relationship and the Ministry of External Affairs (MEA) termed the relations started maturing ever since India adopted economic reforms in the nineties and has made rapid strides in all areas - trade, energy and mining, science & technology, information technology, education and defence. Defence Cooperation between India and Australia has expanded significantly in recent years. An MoU on Defence Cooperation has been signed as well as a Joint Declaration on Security cooperation was signed. There are frequent exchanges of visits including at the level of Service Chiefs, regular Naval, Air Force and Army Talks; joint naval exercises; regular exchanges at each other’s training institutes and seminars.