Ayodhya Verdict: Section 144 Of The CrPC Imposed In Mumbai

In light of the Ayodhya verdict, Section 144 of the CrPC has been imposed in Mumbai, the order has been issued by the Commissioner of Police, Greater Mumbai

In light of the verdict in the significant Ayodhya case, Section 144 of the CrPC (Criminal Procedure Code) has been imposed in Mumbai, Maharashtra on Saturday, November 9. Section 144 of CrPC prohibits assembly of more than 4 people in an area. According to an order issued by the Commissioner of Police Greater Mumbai, "It is apprehended that there is likelihood breach of peace and disturbance of public tranquillity and also there is a grave danger to human lives and loss of properties and the undersigned (Deputy Commissioner of Police (Operations) Pranaya Ashok) in the capacity of Executive Magistrate is fully satisfied that there are sufficient reasons/grounds for passing prohibitory orders under Section 144 of CrPC-1973 to ensure that no untoward/unwanted incident occur."

The order signed by the Dy. CP (Operations) further reads, "It is considered expedient to issue prohibitory order for restricting movement and unlawful assembly or five or more persons for prevention of breach of peace, disturbance to public tranquility and danger to human lives and loss or properties to prevent any kind of riot or affray in the areas within the jurisdiction of under the control of Commissioner of Police, Greater Mumbai." The order states that "This order shall come into effect fro 11:00 hours on 09/11/2019 and ending at 11:00 hours on 10/11/2019 unless withdrawn earlier. Any person contravening the order shall be punishable under section 188 of the Indian Penal Code."

READ | Ayodhya Verdict: Disputed Land To Be Given To Hindus, Holds SC

The order issued by the Commissioner of Police, Greater Mumbai 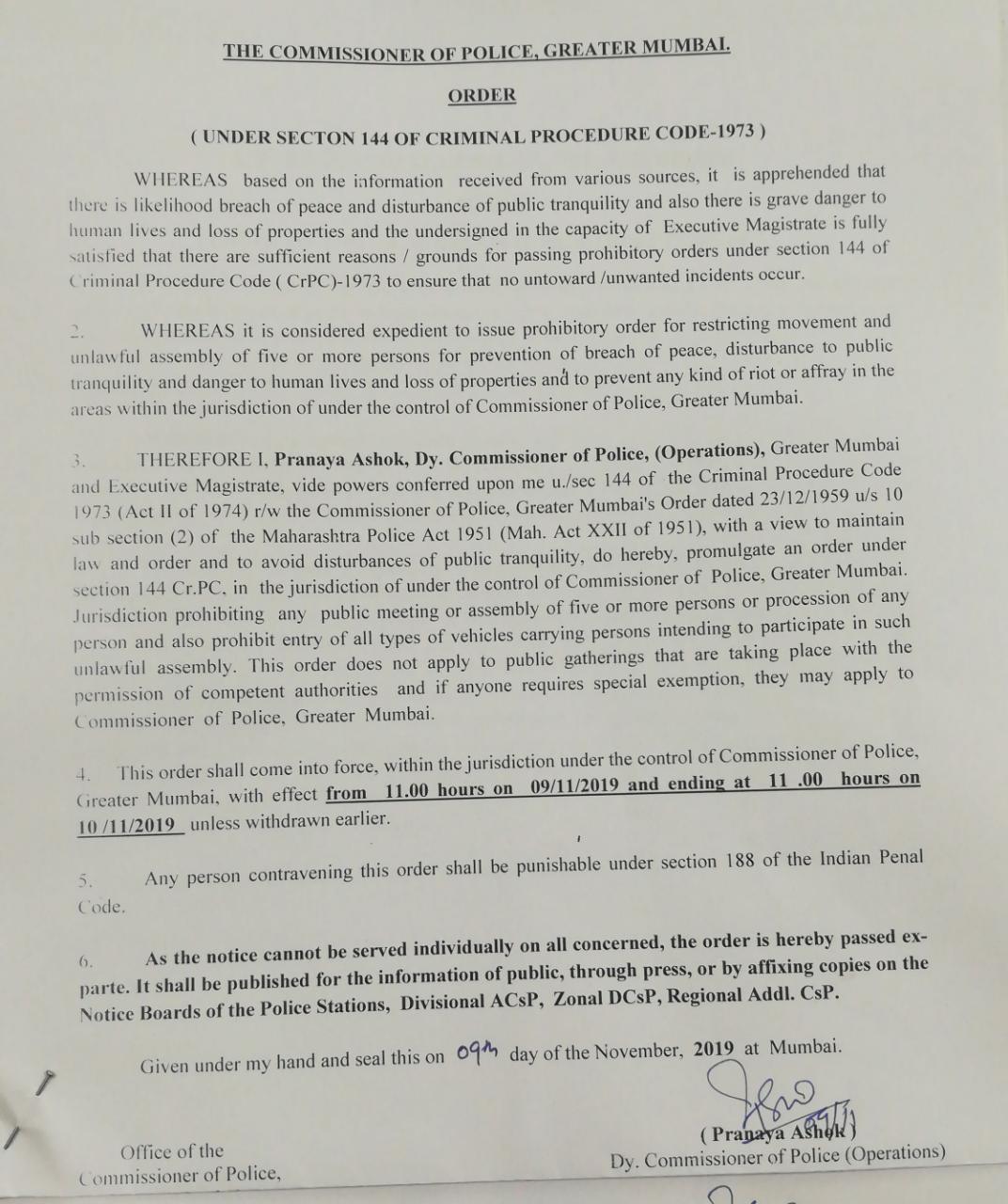 Pronouncing the landmark verdict in the Ayodhya dispute case, the Supreme Court on Saturday delivered a unanimous judgment in the title suit of the disputed area awarding it to the Hindu parties for the construction of a temple. It also directed the Centre to come up with a scheme within three months to set up a trust which will hand over the outer courtyard and inner courtyard of the site for construction of a temple. Apart from this, the SC stated that an alternate land of 5 acres is to be allotted to Muslims for the liberty of constructing a mosque, either by the central govt or the State govt, in a suitable and prominent place in Ayodhya. CJI Ranjan Gogoi, while delivering the unanimous judgment, dismissed the claims of the Sunni Central Waqf Board and the Nirmohi Akhara. He also termed that the three-way division of the disputed land by the Allahabad HC in its 2010 verdict is wrong.

READ | SC To Announce Ayodhya Verdict; Here Is The Brief Overview Of The Case