Yoga guru Ramdev moved SC, seeking a stay on proceedings in multiple FIRs lodged against him over his allopathy remarks in which he criticised doctors 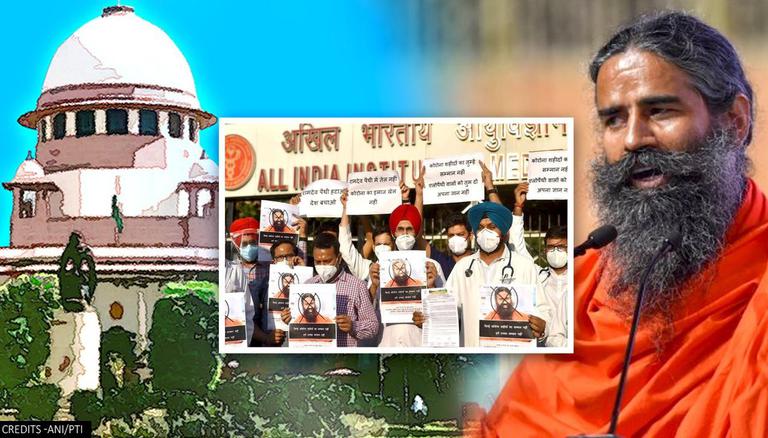 
Yoga guru Ramdev moved the Supreme Court on Wednesday, seeking a stay on the proceedings in multiple cases lodged against him over his allopathy remarks in which he criticised doctors over the treatment method for COVID-19 cases. Baba Ramdev in his petition sought a stay on the proceedings in FIRs lodged by Indian Medical Association (IMA) in Patna and Raipur branches and asked for them to be transferred to Delhi.

The Raipur police registered an FIR against Baba Ramdev last week for allegedly spreading "false" information about allopathy medicines being used to treat COVID-19 patients. The case was filed on the Patanjali co-founder based on a complaint filed by the Chhattisgarh unit of the Indian Medical Association (IMA), Raipur's Senior Superintendent of Police Ajay Yadav said.

Baba Ramdev has been booked under Sections 188 (disobedience to order duly promulgated by public servant), 269 (negligent act likely to spread infection of disease dangerous to life), 504 (intentional insult with intent to provoke breach of the peace) and others of the IPC and provisions of Disaster Management Act, 2005, the police said.

Baba Ramdev has been engaged in a tussle for weeks with the IMA for his remarks on modern medicine, in which he questioned the efficacy of COVID-19 vaccines and of allopathic medicine

What did Baba Ramdev say about Allopathy?

IMA's demand to prosecute Baba Ramdev under the Epidemic Diseases Act was triggered by a video being circulated on social media in which he is allegedly heard saying allopathy is a stupid science'. In a press release, IMA claimed that Baba Ramdev had called doctors 'murderers' in front of the Health Minister in the pretext of the 'release of his wonder drugs' and accused the yoga guru of misleading the public by making baseless accusations to sell his 'unapproved & illegal drugs'.

Citing the pain & agony over the loss of over 1200 modern medicine doctors, IMA dared the govt to either consider the accusations of Baba Ramdev and dissolve the modern medical facility or boldly prosecute yoga guru Baba Ramdev for his statements.