Rawal or head priest of the famed Badrinath shrine, Easwaraprasad Namboothiri, has urged the authorities to stop the projects that harm nature and the people of the hilltop town. 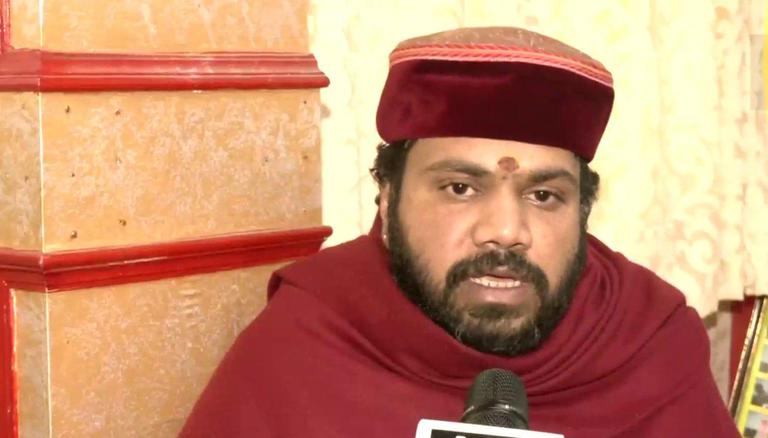 
Expressing concern over land subsidence at Joshimath in Uttarakhand, the Rawal or head priest of the famed Badrinath shrine, Easwaraprasad Namboothiri, has urged the authorities to stop the projects that harm nature and the people of the hilltop town.

An apparent sinking of land is being blamed for cracks developing in hundreds of houses and buildings in Joshimath, a town of 17,000 people situated at an altitude of 1,830 metres that serves as a crucial gateway to important Hindu and Sikh shrines and also draws trekkers in parts of the Himalayas.

As the images of shrinking land created an uproar, the National Disaster Management Authority (NDMA) and the Uttarakhand government have directed the space agency and several state-run institutions not to interact with media or share information on social media on the Joshimath situation without prior approval.

"We worship the mother earth. The developments in Joshimath is a matter of concern. Development projects that are harmful to the earth should be stopped. There is no point in developing a project in such a manner that it creates problems for the ecologically fragile land and its people," the Rawal said.

The Rawals of Badrinath are Namboothiris from northern Kerala, a tradition started and ordained by Sage Sree Sankaracharya himself centuries ago.

Talking to PTI, he said the development works should be implemented by protecting the lives of the people.

The Rawal had returned to his home state after the Badrinath shrine, dedicated to Lord Vishnu, was closed ahead of the winter season on November 19, 2022.

The temple is one of the 108 Divya Desams dedicated to Lord Vishnu and is a holy shrine for Vaishnavas where the deity is worshipped as Lord Badrinath. The temple remains open only for six months every year – between the end of April and the beginning of November, due to extreme weather conditions in the Himalayan region.

"The very concept of dharma is that no one should be harmed," the Rawal explained, adding that the construction of roads in the ecologically sensitive hills should be carried out without inflicting harm to nature.

"These days, there are options for environment-friendly development plans. We can do the same as in other countries. What is the whole point of bringing such projects if the people lose their villages and livelihood," Namboothiri asked.

On January 10, the Union Power Ministry summoned officials of the National Thermal Power Corporation (NTPC), which is constructing the Tapovan Vishnugad Hydroelectric Project in the region, to review the subsidence in Joshimath.

A day later, India's largest electricity-generating company wrote to the ministry stating that its project had no role in the region's subsidence.

"Not only the NTPC project, but all projects that are harming the environment should be stopped. We should not destroy our sacred land. The Himalayan region is a delicate zone. This sacred land should be protected." Without taking any names, the head priest of the Badrinath temple said project works are often carried out "with a vested interest of earning profits alone".

READ | SC to hear on Monday plea on Joshimath subsidence

"We need to bring development by protecting its common people. The life and well being of people are more important than such projects," he said.

The 32-year-old became the Rawal of the Himalayan temple in May 2014. Before that he had been serving at the temple as 'Nayab Rawal' or deputy Rawal.

Satellite images of Joshimath, released by ISRO, show that it sank 5.4 cm between December 27, 2022 and January 8, 2023, triggered by a possible subsidence event on January 2. A total of 185 families were evacuated from subsidence-hit houses since, according to the District Disaster Management Authority (DDMA), Chamoli.

Besides, a preliminary study by ISRO's National Remote Sensing Centre (NRSC) indicated a previous instance of land subsidence in the area, which was much slower, when Joshimath sank 8.9 cm between April and November 2022.

The report said a subsidence zone resembling a generic landslide shape was identified – tapered top and fanning out at the base. It noted that the crown of the subsidence was located near the Joshimath-Auli road at a height of 2,180 metres.

However, on January 14, several state-run institutions including ISRO were directed by the NDMA and the Uttarakhand government not to interact with media or share information on social media on the Joshimath situation without prior approval.

The number of houses that have developed cracks in the town stands at 760 now, out of which 147 have been marked unsafe, the DDMA had said.

Meanwhile, state-owned NTPC had said that a 12-km tunnel connected to the Tapovan Vishnugad Hydroelectric Project is situated one kilometre away from Joshimath town and is at least a kilometre below the ground.

A head trace tunnel (HRT), which connects water intake at the dam site to the powerhouse for generation of the Tapovan Vishnugad hydro electricity project, "is not passing under Joshimath town," NTPC had said.

The NTPC also informed the power ministry that there was no active construction work happening in the area for about two years.

Construction work for the 4x130 MW Tapovan Vishnugad project started in November 2006. The project includes the construction of a concrete barrage at Tapovan (15 km upstream of Joshimath town).

The project was to be completed in March 2013 but remains "under construction' almost 10 years later. From the initial approved investment of Rs 2,978.5 crore, the project cost has now boomed to an estimated Rs 7,103 crore.