The administration has made tight security arrangements with police personnel from different areas pulled in to cover the entire venue. 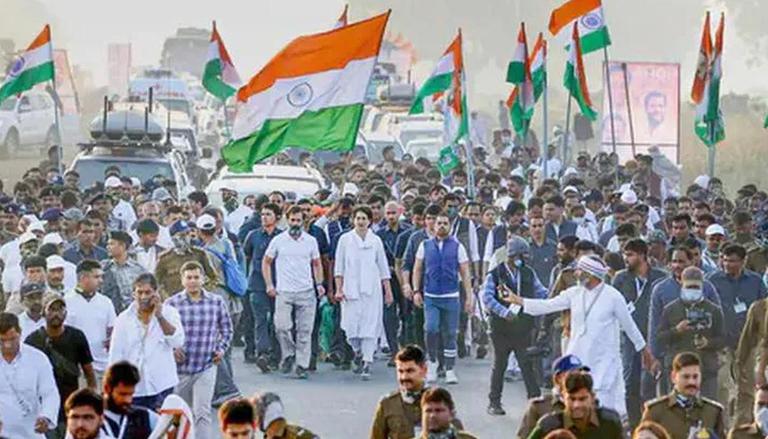 
The Rahul Gandhi-led Bharat Jodo Yatra is all set to enter Congress-ruled Rajasthan Sunday evening amid excitement among party workers and a well-coordinated attempt to paper over differences between Chief Minister Ashok Gehlot and his former deputy Sachin Pilot.

Gandhi and his fellow yatris will be given a grand reception at Chanwli Chauraha, approximately 40-km from Jhalawar city, in the traditional Rajasthani culture when they enter the state from the Hindi-heartland state of Madhya Pradesh.

Local villagers have already swelled up at the venue. They have rolled out green carpet, set up a stage, and arranged drums and DJ systems to give their leader and his companions on the 3570-km yatra a grand welcome. A large number of party workers carrying party flags have reached the venue.

Roads leading to the venue are lined on both sides with welcome hoardings, and banners of Chief Minister Gehot and his former deputy Pilot. Posters of local leaders have also been put up.

The administration has made tight security arrangements with police personnel from different areas pulled in to cover the entire venue.

The yatra will enter the state at Jhalawar, a BJP stronghold, and is scheduled to cover a distance of 500 km in 17 days.

This is the first time that the yatra, which began from Kanyakumari on September 8, is entering a Congress-ruled state.

Ahead of the yatra entering their state, Gehlot and Pilot, who have differences and have been in a tug of war for the CM's post, presented a united face.

Dismissing apprehensions that the infighting may affect the Yatra's Rajasthan leg, Pilot on Sunday told PTI that the party's state unit is "fully united" and focussed on ensuring that the Yatra is even more successful than it has been in other states.

The yatra will only add to the efforts towards the next election in 12 months' time, the former Rajasthan deputy chief minister said.  The Gehlot government has also pacified Gurjar leader Vijay Singh Bainsla, who had threatened to disrupt the yatra over his pending demand regarding reservation and other issues with the state government, by holding a series of meetings on the issues recently. Bainsla has withdrawn his protest against the yatra.

"We all are ready to welcome the Bharat Jodo Yatra today. All preparations have been completed. It will be a historic yatra in the state. Besides party workers, there is great enthusiasm among the people of the state for this yatra," he said.

Jhalawar is a BJP stronghold having the influence of former chief minister Vasundhara Raje. She represents Jhalrapatan assembly constituency of Jhalawar. All the four assembly constituencies in this district are with the BJP and Raje's son Dushyant Singh is MP from Jhalawar Lok Sabha seat.

A day before the entry of the yatra, Pilot had issued a video on his social media platforms to welcome Gandhi. "Entire Rajasthan is ready to join Rahul ji's Bharat Jodo Yatra. Are you coming?" Pilot said in the video.

The video showed him tying shoelace, stretching his body, fixing his spectacles and running as more people joined him.

According to the officials plan, Gandhi will start the Rajasthan leg of yatra on Monday at 6 am from Kali Talai. He will reach the Bali Borda chauraha at 10 am after covering a distance of 14 km. After lunch, the yatra will resume from Nahardi at 3.30 pm and will reach Chandrabhaga Chauraha at 6.30 pm.  The Congress leader will have a corner meeting at Chandrabhaga chauraha in the evening. The night stay will be in the sports complex of Jhalawar.  Gandhi will cover nearly 500 km in the state traversing through Jhalawar, Kota, Bundi, Sawai Madhopur, Dausa and Alwar districts before entering Haryana on December 21.  Gandhi is scheduled to hold dialogue with farmers at Lalsot in Dausa on December 15 and address a public rally in Alwar's Malakheda on December 19.