The Centre on Thursday clarified its stance on free rides for women in Delhi Metro, a freebie that was announced by Delhi Chief Minister Arvind Kejriwal earlier in June. I

The Centre on Thursday clarified its stance on free rides for women in Delhi Metro, a freebie that was announced by Delhi Chief Minister Arvind Kejriwal earlier in June. In its statement, the Centre said that the Union Government had no proposal for the freebie, thereby also ruling out the possibility of the Centre agreeing with the Kejriwal-led Delhi government.

In response to five questions posed by TMC MP Saugata Roy to the Ministry of Urban Affairs and Housing regarding the Centre's plan to offer free Delhi metro rides for women, the Union Minister Hardeep Singh Puri said that the Union Government had no proposal for the free rides nor had the Delhi government approached the Centre for getting the approval of any proposal. 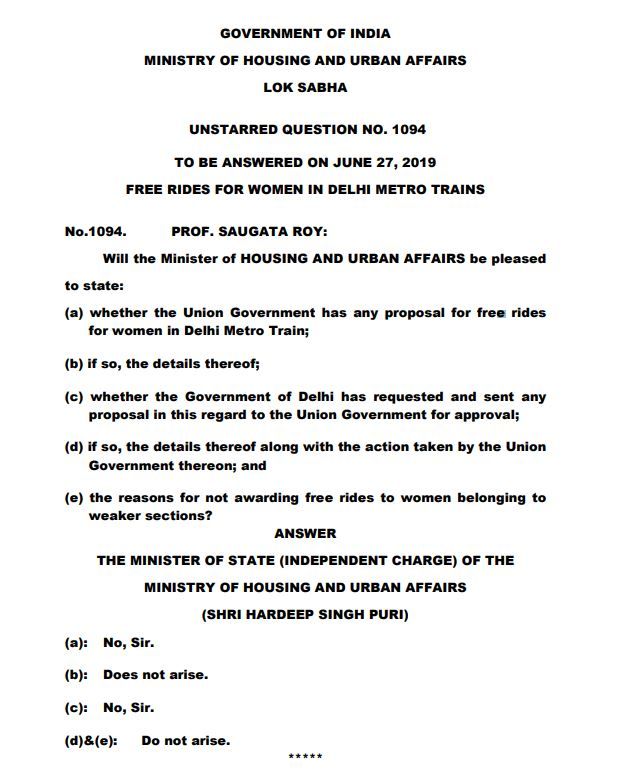 The freebie scheme that was announced earlier faced severe backlash from various leaders, who accused Delhi CM Arvind Kejriwal of announcing the free rides as bait to capture more votes in the upcoming Assembly elections.

Metro Man E Sreedharan had penned a letter to Prime Minister Narendra Modi, asking him to intervene in the matter as the free ride would be an extreme burden on the exchequer. He said that the state government could distribute money to the women passengers instead of offering free rides. Sreedharan said when the first section of the Delhi Metro was to be opened in 2002, he had taken a firm decision that no one would be given travel concession.

"The proposal to provide free ride to women in Metro trains and public transport buses is aimed at hiding failures of the Delhi government. Also, the announcement about installing 1.5 lakh CCTV cameras is an attempt to divert attention from unfulfilled promise of free wi-fi that AAP made to people before coming to power," Sharma said.