A Bihar BJP MLA gave a classic example of VIP racism after he ferried his student daughter back to Patna from Rajasthan's Kota on April 16 even as the nationwide Coronavirus lockdown remain in place.

Despite Bihar CM Nitish Kumar declaring that the protocol of lockdown has to be maintained and the State will not allow any migrant population to come back to Bihar till May 3, BJP MLA Anil Singh used his influence to get a vehicle pass issued from the SDO of Nawada to travel to Kota on April 16.

A few days ago, Nitish Kumar had objected to Uttar Pradesh CM Yogi Adityanath's decision to ferry students from Kota back to UP, in 300 buses arranged by the State government.

While speaking to Republic TV, Anil Singh said held that he has done nothing wrong as he had applied for an online pass earlier and was open about his reason to travel. "I have not hidden the reason that I want to get my daughter back home from Kota. My daughter who prepares for competitive exams was trapped there after lockdown and she was not even getting food," Singh claimed.

"Being a father, I travelled to Kota following the protocol of social distance. As far as Nitish Ji's objection to Yogi's decision is concerned, he is objecting because the protocol of social distance is not being followed as the children are being brought in buses in large numbers. But Yogi Adityanath has made the right decision for getting the children back from Kota," the Hisua MLA added.

On being asked why such disparity between children of rich parents and migrant labourers' (who also want to return to Bihar), the BJP MLA replied, "It's up to the higher-ups to decide but the Bihar government has transferred Rs 1,000 financial assistance into the account of labourers trapped outside Bihar." 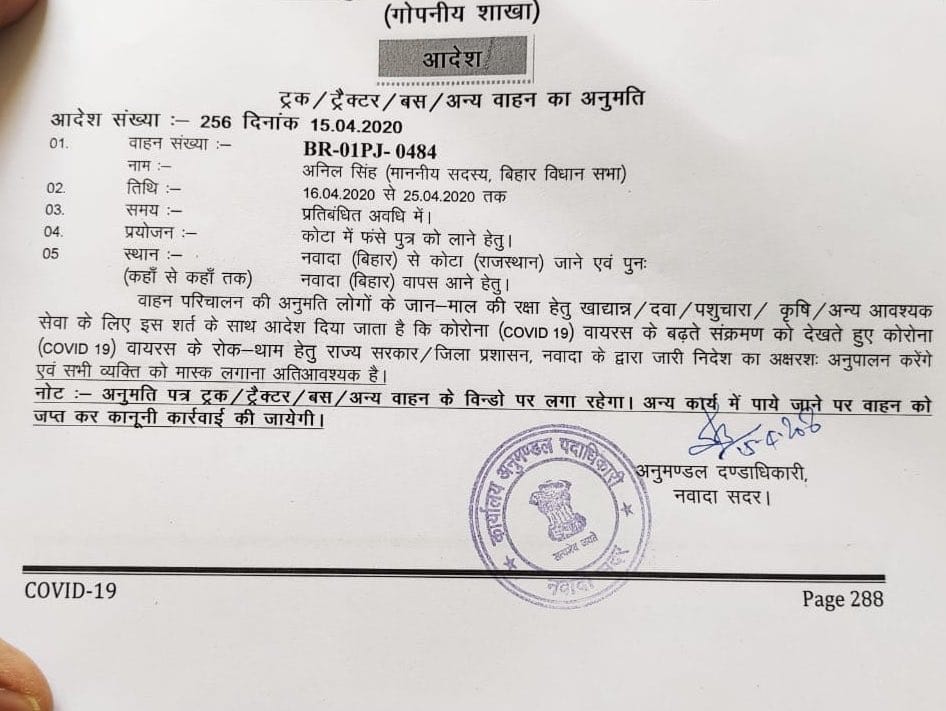 Why the double standards?

Nitish Kumar's government came under fire from many quarters, including the former vice-president of his party Janata Dal (United) and renowned poll strategist Prashant Kishore. In a tweet on Sunday, Kishore questioned the "double standards" of Nitish Kumar, wherein the government is issuing passes for influential people but denying entry to migrant labourers.

Reacting strongly, RJD spokesperson and MLA Shakti Yadav labelled the incident "discrimination between the rich and poor". "On one side the Bihar government is asking migrant labourers to stay put wherever they are and on the other hand BJP MLA gets a pass issued for his vehicle and travels to Kota amidst lockdown to get his daughter back. What about the poor children who are trapped outside. How did the SDO issue the vehicle pass," questioned Yadav.

Last week, when Kota DM had issued passes for private vehicles to ferry students back to Bihar. Following which, Bihar chief secretary had written to Union Home Secretary and Rajasthan Chief Secretary to warn the Kota official not to issue passes and follow the protocol of social distance. Nitish Kumar had objected to Adityanath's decision, citing that if this is followed then there will be pressure from parents of children from Bihar and migrant labourers on the State government to get them back.

The number of positive cases in Kota has risen to 90 and Bihar fears that people here might be at risk of getting infected if the Government grants permission to students to return. But the BJP MLA has embarrassed the Bihar Government.

PEOPLE HAVE PLEDGED SO FAR
LATEST NEWS
View all
6 hours ago
Arunachal pradesh: bro to bring labourers for road construction amid lockdown
6 hours ago
52 new covid-19 cases in j&k, tally 1,621
1 hour ago
'only 41 shramik trains for maha despite being prepared to run 125 trains': piyush goyal
6 hours ago
Up govt withdraws order prohibiting use of mobile phones by covid patients in isolation wards
6 hours ago
Jharkhand mandates 14-day home quarantine for incoming air passengers