Nonetheless, the CM quietly celebrated the festival at his 7, Circular Road residence along with close relatives, including his only son Nishant. 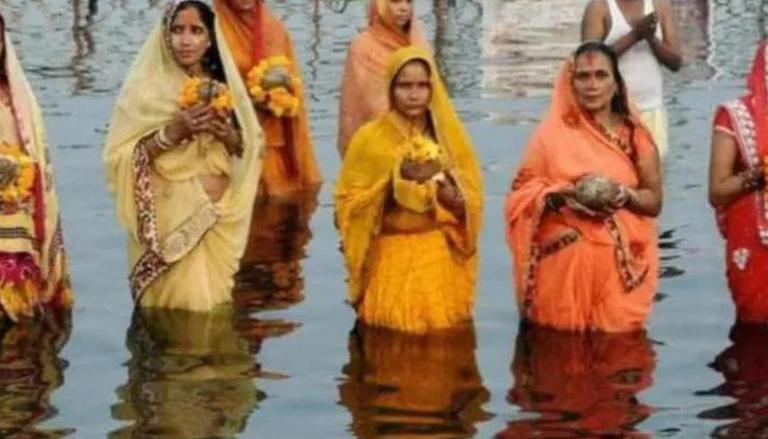 
After two years of restrictions due to Covid-19, devotional fervour gushed forth across Bihar on Sunday when millions of people offered salutations to the setting sun on the auspicious occasion of "Chhath", the state's most popular festival.

"Chhath vratees" - those taking part in elaborate rituals without taking a sip of water for 36 hours - stood in waist-deep waters at ghats along rivers, ponds, and even make-shift water bodies on rooftops for "arghya" (offering) to the "astachal gami Surya".

All streets seemed to be leading to the Ganges in the state capital where social segregations gave way, even if temporarily, in the face of an all-encompassing devotion towards "Chhathi Maiya", who is believed to fulfil wishes.

"I started observing Chhath nine years ago, driven to despair over not having any children despite many years of marriage. Members of my community thought it was a gunaah (sin). But my husband supported me. Chhathi Maiya blessed me.  I shall continue Chhath as long as I can," said Najma Khatun.

Tausif Hashmi, a banker, observed the gruelling austerities for the third year, impelled by a tale that is as fascinating as incredible.

"I was at a friend's place in 2014 during Chhath when a stone hurled playfully by me at no one in particular hit a snake. The serpent turned out to be vicious and chased me for a couple of days. It was pacified when my friend's mother prayed to Chhathi Maiya that I be spared and that as penance I shall be observing Chhath for three years. I owe my life to Chhathi Maiya.  So, even today, having discontinued the observances, I nonetheless make it a point and help as many vratees as I can," he said.

Indeed, many need help from able-bodied persons during "Chhath" which involves feats like repeated prostrations (sashtaang dandvat) on the roads leading to the ghats and walking long distances carrying cane baskets (soop) filled with items used in making the offerings.

The redemptive powers attributed to Chhathi Maiya also found great resonance with men and women whose lives have been ruined because they ended up on the wrong side of the law.

According to IG, Jail, Jitendra Srivastava, close to 800 inmates at prisons across the state were doing Chhath with assistance from jail authorities who have helped the prisoners with supplies of puja material besides making the premises sparkling clean and inscribing the pathways with greetings.

One of the rare religious festivals which involves no priestcraft, Chhath is known to be equally popular with men and women and the trend is visible inside the jails as much as in the world outside.

For example, in Beur Central Jail on the outskirts of Patna, 10 men and 12 women were observing the austerities while in far-off Sheohar, close to the Indo-Nepal border, the number of male and female prisoners doing Chhath was 14 and 22 respectively.

Meanwhile, at the ghats along the Ganges in the state capital, the vratees missed the familiar sight of Chief Minister Nitish Kumar who has, year after year, taken a steamer ride to greet the devotees during the evening arghya.

The septuagenarian is nursing injuries in the abdomen and a foot that he sustained during a steamer ride earlier this month when the steamer collided with a pillar of a bridge while he was carrying out inspections of the ghats.

Nonetheless, the CM quietly celebrated the festival at his 7, Circular Road residence along with close relatives, including his only son Nishant.

However, the vratees at the ghats found among themselves Tejashwi Yadav, Kumar's deputy, who sauntered along the banks of the river, giving instructions to officials wherever he found something amiss.

The popularity of Chhath now extends far beyond the boundaries of the state. People in southern parts of the country and even abroad now know about this festival. We are committed to ensuring that those back home celebrate the festival without any difficulty, said Yadav, who had late Saturday night conducted a surprise check of the ghats.

The festival will conclude Monday morning with the offering of arghya to the rising sun after which the vratees break their fast partaking of the prasad that consists, primarily, of thekua, a delicacy made of flour and jaggery, besides fruits.