Citing the repeated attacks on the Bihari Migrants and other non-local labourers in the valley, Bihar CM dialled the Jammu and Kashmir LG Manoj Sinha 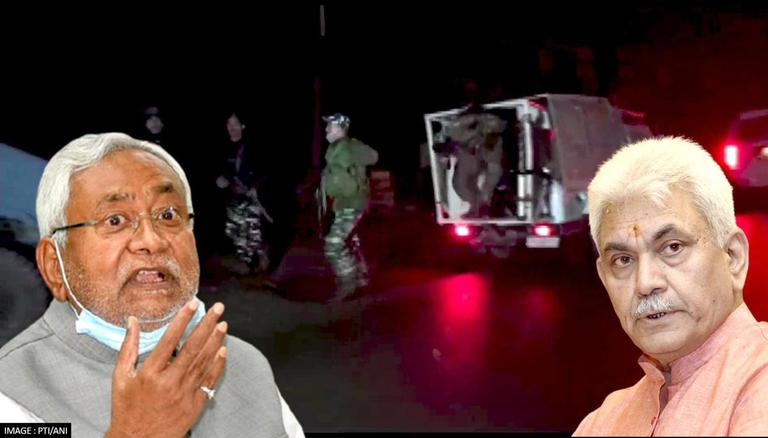 
Expressing grief and concern over the brutal killing of migrant workers from Bihar in Jammu and Kashmir on Sunday, Bihar Chief Minister Nitish Kumar had announced Rs. 2 lakh ex-gratia for the kin of the deceased Raja Reshi Dev and Yoginder Reshi Dev who were killed by the terrorists on Sunday in Kulgam's Wanpoh district. The Bihar CM also expressed his concern over the health of the third victim Chun Chun Rishi Dev who was injured in the accident and is currently hospitalised.

Citing the repeated attacks on the Bihari Migrants and other non-local labourers in the valley, Bihar CM dialled the Jammu and Kashmir LG Manoj Sinha to discuss the situation, demanding the safety of migrant workers.

Bihar CM Nitish Kumar announces Rs 2 Lakh each ex-gratia from CM's relief fund for kin of Raja Reshi Dev and Joginder Reshi Dev who were killed by terrorists in Kulgam, J&K this evening.

This comes after, on Sunday, in series of perpetrated attacks on civilians, the terrorists attacked innocent civilians for the fourth time in a row, killing more than 7 people till now. On Saturday, terrorists have killed two labourers out of which Arvind Sah, was from Bihar’s Banka and the other one, Sagir Ahmad was from Uttar Pradesh. Earlier, a gol gappa vendor from Bihar was slain by the armed miscreants. Total 4 residents of Bihar have lost their lives in Jammu & Kashmir.

On the other hand, the army and security forces are running one of the biggest counter-terrorism operations in Poonch, which has lasted for more than 7 days now to nab the perpetrators. In the ongoing encounters in Poonch, the army has lost 9 Bravehearts till now.

J&K: Two non-Kashmiri labourers, all of them being residents of Bihar, killed and one injured after being fired upon by terrorists at Wanpoh area of Kulgam. Police & Security Forces cordoned off the area.

Visuals from the spot.