In shocking apathy, a COVID patient's body was transported to the crematorium allegedly on a Municipal garbage cart in Bihar's Nalanda district on Sunday 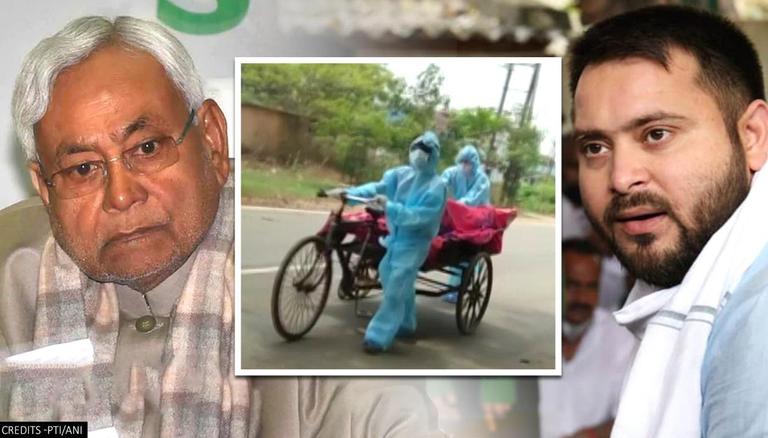 
In shocking COVID apathy, a COVID patient's body was transported to the crematorium allegedly on a Municipal garbage cart in Bihar's Nalanda district on Sunday. After the incident, Nalanda Civil Surgeon Dr Sunil Kumar said, "I've been told that the body was carried on a car. I will get it probed and action will be taken". Nalanda is Bihar CM Nitish Kumar's home district. Bihar has 75,090 active COVID cases, 5,72,987 recovered cases and 3832 fatalities.

A #COVID19 patient's body was carried to the crematorium on a cart of Municipal Corporation in Bihar's Nalanda yesterday. pic.twitter.com/y3iA2yjlPp

Slamming the apathy in Nitish Kumar's home district, RJD leader Tejashwi Yadav pointed out that Kumar had been ruling for 16 years. He added that while JDU Chief Minister, National President, a minister, two MPs and 6 MLAs out of 7 are from Nalanda district, these leaders were asking for his resignation. RJD has regularly been demanding Kumar's resignation over Bihar COVID mismanagement.

READ | COVID-19 kills 73 more in Bihar, positivity rate down by nearly half in 10 days

Bloated bodies spotted floating in Ganga at UP and Bihar

Last week, early 40 decomposed bodies surfaced on the banks of Ganga in Bihar raising alarm amongst local citizens and later piled up on Mahadeva Ghat's bank at Chausa town. After being identified to be of COVID-19 patients, Buxar DM said that the bodies 'appear to be 4-5 days old' and added that they will be cremated respectfully. The district administration has alleged that the bodies might have floated from Uttar Pradesh and are of COVID-19 patients. A day later, several bloated and decomposing dead bodies surfaced on the banks of river Ganga in Uttar Pradesh's Ghazipur - which is  55 km away from Buxar.

READ | Centre asks UP, Bihar to prevent dumping of dead bodies in Ganga

Soon enough, hundreds of dead bodies were found buried in the sand near river Ganga in Uttar Pradesh's Unnao. According to the District Magistrate (DM), the bodies were found in an area far from the river and then buried by the administration. CM Yogi Adityanath directed the SDRF and PAC police personnel to patrol every river in the state for ensuring that no one immerses the dead bodies in the river as a part of any ritual. Maintaining that every deceased person has a right to be honourably laid to rest, he revealed that the UP government has already earmarked funds for this purpose. The Centre too has directed Uttar Pradesh and Bihar to prevent dumping of dead bodies in the Ganga and its tributaries, and focus on their safe disposal and dignified cremation.