With Wildlife On The Roads,Bihar Govt Urges Citizens To Keep Speed Limit Of Cars In Check

Keeping in mind the incidences of wildlife venturing out from forest areas and wandering on empty roads amidst lockdown, Bihar govt urged people to drive slow

Amid the lockdown, with incidences of wildlife venturing out from forest areas and wandering on empty roads on the rise in different parts of the country, the Forest and Environment Department of Bihar government has appealed to citizens through an advertisement to lower their speed limits while driving, following a relaxation in lockdown so that animals do not meet with accidents.

In recent times, a large number of deers, leopards, tigers and Indian bison have been seen wandering on empty roads. Recently , three leopards had ventured out from the forest area of Valmiki Nagar and travelled to Vaishali, a distance of 300 km. Last week a deer got estranged and entered a village. Forest officials along with police rescued it from Manichhapra of Chakia in Champaran district.

Dipak Kumar Singh, Principal Secretary, Department of Environment, Forest and Climate change said, "In recent times instances have increased of wild animals from forests entering habitation, like the incident of a leopard entering Lalganj, Vaishali and a leopard making Bihta air force station its home. Besides, Bihar has a lot of wildlife in areas outside forest also, for example, blackbucks living in the fields of Buxar and Rohtas districts and hog deers in the diaras of Gandak."

He added, "They have also started roaming freely, including on the roads. Sudden start of activities, especially heavy vehicle movements on the road, may catch them unaware and they may get injured." He further said that the department has appealed to people through media and social media to drive carefully and take care of the wildlife. 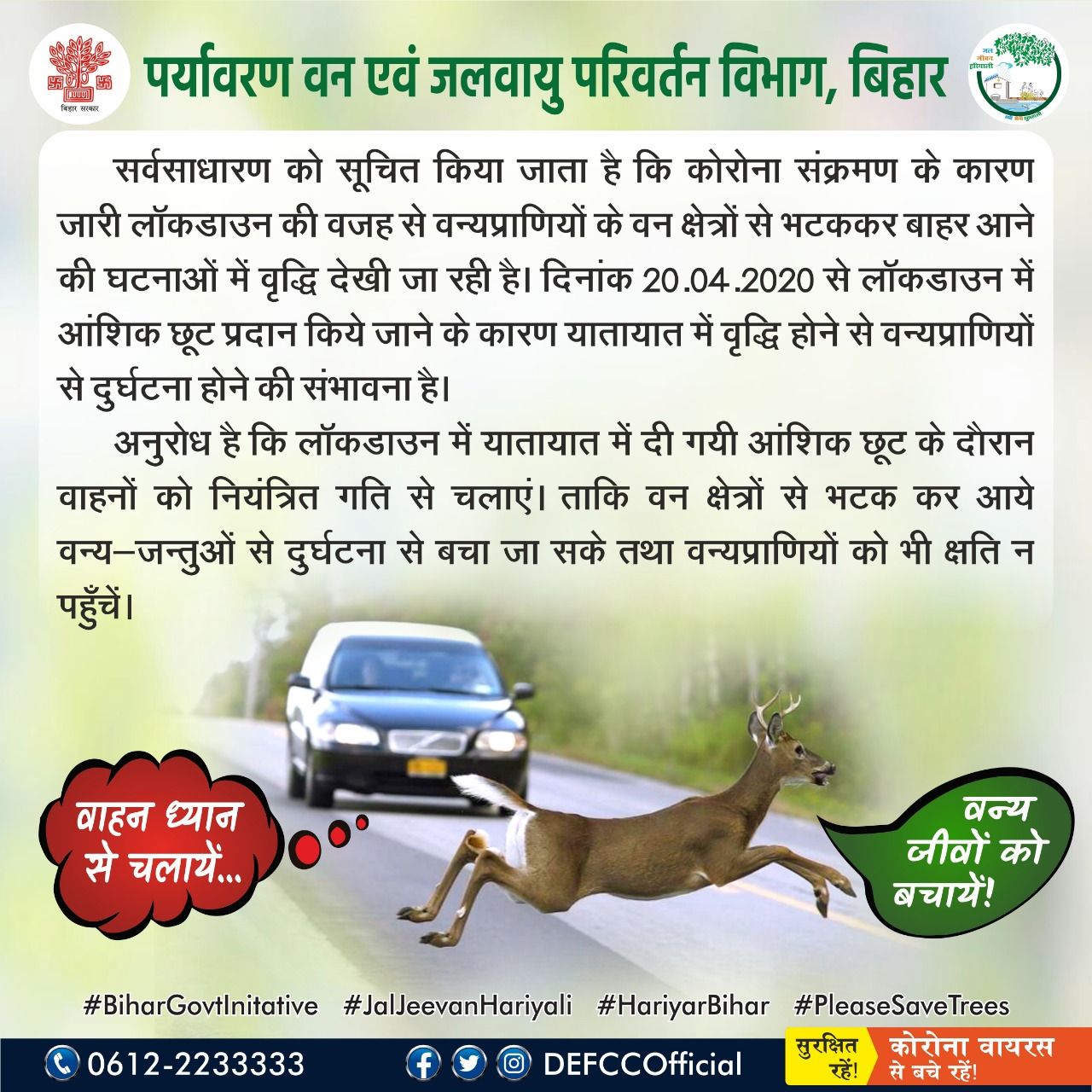 Amidst the silence of lockdown, even forest officials are finding it difficult to control the movement of wildlife from forest areas. Recently, a herd of Indian bison popularly known as Gaur were witnessed in the periphery of Valmiki Nagar forest.

Deputy Director of Valmiki Nagar Tiger Reserve, Gaurav Ojha said, "It was a herd of 30 Gaurs which was mainly a female herd with 4-5 calves. We got a good chance to count the number in sufficient daylight. One of the males who didn't like our presence gave us a warning. Gaurs weighing around 1,000 kgs are dangerous and aggressive. The presence of Gaurs in VTR is a unique happening."

READ | Seven Labourers On Way To Bihar Intercepted By Police

With roads empty and complete silence in human-populated areas, even the wildlife is confused. Henceforth, this initiative of the forest department to drive slow on roads and not to attack any wildlife if one comes across any, on the roads, is a step in the right direction by the Bihar government for conservation of wildlife.