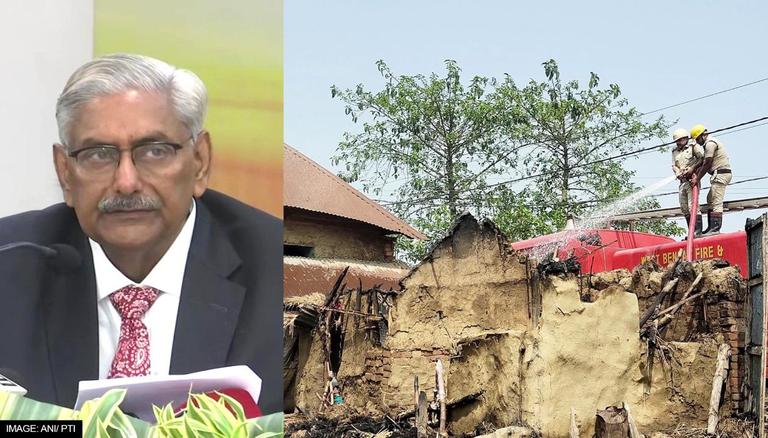 
The National Human Rights Commission (NHRC) Chairperson Justice Arun Mishra has taken suo motu cognizance of the killings in the horrific Birbhum violence. According to NHRC officials, the investigation would be carried out by the human rights body in the state. Eight people were burned to death in the Rampurhat area of West Bengal's Birbhum on Tuesday. Earlier in the day, a TMC delegation met Union Home Minister Amit Shah over the incident. The West Bengal state govt has come under fire over the incident, which the BJP has emphasised is the latest and perhaps goriest incident in the unending post-poll violence in the state.

National Human Rights Commission Chairperson Justice Arun Mishra India has taken suo motu cognizance of the killings in the Birbhum district of West Bengal. Investigations would be carried out by NHRC team there: NHRC officials pic.twitter.com/nN1cG02OZJ

A 13-member Trinamool Congress (TMC) delegation met Union Home Minister Amit Shah at the Parliament over the Birbhum incident and urged him to remove West Bengal Governor Jagdeep Dhankhar. The delegation was led by TMC MP Sudip Bandyopadhyay and also included Derek O' Brien, Mahua Moitra and other leaders. The TMC has claimed that Dhankhar's work is "against the constitutional system".

"We have said that Governor of West Bengal should be removed, in view of the Rampurhat, Birbhum incident. His work is against our constitutional system. The parliamentary democratic system is under threat," said Bandyopadhyay, after meeting Amit Shah.

"We have given a copy of the letter by the Chief Minister for changing of Governor, to the Home Minister. Our CM is handling the situation finely. 21 persons have been arrested so far, 15 police officials have been asked to go on leave. No guilty person will be spared," added Bandyopadhyay.

At least eight people, including two juveniles, were burned to death in the Rampurhat area of West Bengal's Birbhum on Tuesday after a violent mob allegedly set houses on fire with petrol bombs following the killing of Trinamool Congress leader Bhadu Sheikh. So far 22 arrests have been made by police. As per the latest update, the post-mortem report of the victims has revealed that the women and children were badly beaten up before being burnt alive.

Taking suo motu cognisance of the Rampurhat incident, the Calcutta High Court on Wednesday directed the state government to install CCTV cameras for round-the-clock surveillance. Additionally, the Court has also directed the state government to submit a status report on the incident in 24 hours (by around 2 pm on Thursday). A special investigation team has been formed to probe the matter.