Varma said she had mixed feelings about her trip to Rawalpindi, which she described as a dream come true. 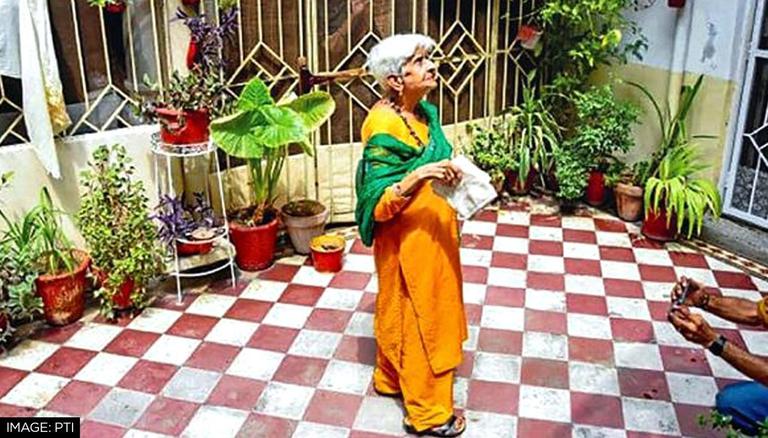 
'Bitter and sweet' - that is how 90-year-old "Pindi Girl" Reena Chhibber Varma described her first visit to her ancestral home in Pakistan's Rawalpindi, 75 years after she and her family left the city for India amidst the Partition.

Pune-based Varma visited her home on Wednesday. On reaching her home 'Prem Nawas' in the garrison city, the residents in the neighbourhood gave her a rousing welcome. Drums were played and flower petals were showered on her.

She looked composed, completely unmoved by the frenzied crowd around her.

Varma said she had mixed feelings about her trip to Rawalpindi, which she described as a dream come true.

"My heart is grieving but I'm thankful to be around to experience a moment I've been waiting for a lifetime," Varma told BBC.

"It's bitter and sweet," she said.

"I wanted to share this moment with my family, but they are all gone. I am happy to make it here, but I'm also feeling lonelier today."

Varma said she and her four siblings studied at the Modern School in the city.

She said that no one from her family of eight was alive to share her joy.

The grandchildren of their old neighbours now live in the house where she and her family lived.

But her journey was not easy.

Varma's family left Rawalpindi in 1947 at the time of the Partition which led to the creation of two independent nations, India and Pakistan. She was only 15 years old at that time.

Varma never stopped thinking about her childhood home which her father had built with his savings.

Varma had applied for a Pakistani visa in 1965 but failed to get it then as tensions between the two neighbours were high because of the war.

The elderly woman said she had expressed her desire to visit her ancestral home on social media last year.

Sajjad Haider, a Pakistani citizen, contacted her on social media and sent her images of her home in Rawalpindi.

Recently, she again applied for a Pakistani visa which was denied.

She then expressed her wish to visit Pakistan on social media and tagged Pakistan's Minister of State on Foreign Affairs Hina Rabbani Khar on the post. Khar then facilitated her visa to visit her ancestral town.

Overwhelmed by the extreme love during her visit to Pakistan, Varma said she would always like to come back.

I am extremely happy in Pakistan, especially after visiting my house in Rawalpindi. I was warmly welcomed and got immense love from the people here, said Varma, who has been named by the local media as Pindi Girl.

Asked about her intention to come back to Pakistan, she said: If I got another chance, I would surely come back, she said.

In her message to people in India, Varma said: I want to tell the people in India that those who want to come to Pakistan should not lose hope and should continue making their efforts to visit Pakistan and they will succeed.

When asked about her message to the governments of Pakistan and India, she said that people should be allowed to travel and meet freely.

I want the governments of Pakistan and India to make progress and let people meet each other. If people see each other, then they will start loving each other, she said.

She especially asked the younger generation in both countries to learn how to live peacefully.