BJP's National Vice President Jay Panda reacted strongly to Republic Media Network's newsbreak which exposed the false claims peddled by Mumbai Police Commissioner Param Bir Singh, saying that he was 'absolutely shocked' by the way in which the Mumbai Police was treating journalists and putting forward allegations without facts.

"I just watched the package covering the Police Commissioner's press conference and the facts that you have laid out, I must say I'm quite shocked, the levels to which the police have fallen. The Mumbai Police in the past had a stellar reputation but this to me is a blatant violation of the law. To make these allegations completely without basis and not clarifying when the fakeness of it is exposed," said Jay Panda to Republic Media Network's Editor-in-chief Arnab Goswami.

"Picking up journalists from the street, we read about these things happening in Baloch in Pakistan where journalists who expose the nation's wrongddoings are picked up. Looks like Mumbai Police is getting inspired by this. It is absolutely shocking and not acceptable," said Jay Panda, referring to The Mumbai Police's strongarm detention of Republic's consulting editor Pradeep Bhandari at the Khar Police station despite the court granting anticipatory bail earlier.

He added that the facts put forward by Republic Media Network were showing how there was some kind of breakdown happening in the system. "Some of my family members also run a channel, they face the same kind of harassment you and your colleagues face. This kind of blatant misrepresentation by those ensuring law and order can not be permitted in a constitutional democracy like India, these are mafia tactics," he said.

"There has to be due process of law. Courts have condemned these kind of press conferences by officials over matters that are taken to court. These same people have no shame about talking over media trials. People would not have to ask for media trials if authorities did their jobs," he added.

What is the BARC's email to Republic?

Republic Media Network’s CEO Vikas Khanchandani wrote an email to BARC on October 16, 2020, requesting it to "confirm in the public domain" that the "BARC and its vigilance team has found no infringement by Republic TV (ARG Outliers Media Pvt. Ltd)". In response to Vikas Khanchandani's email, BARC responded on October 17, 2020, by thanking the network for their "faith in the internal mechanisms of BARC" and said that "if there was any disciplinary action initiated against ARG Outlier Media Private Ltd, then BARC India would have communicated the same to you along with necessary documents for your response."

Thus, this e-mail proves that BARC did not allege any malpractice against the Republic Media Network, and yet, the Mumbai Police Commissioner floated a factually-bereft campaign against it, which has been comprehensively exposed at every turn. The email by BARC shows that the Mumbai Police Commissioner's entire campaign against Republic Media Network was based on a lie.

Param Bir Singh had held a news conference to accuse Republic TV and two Marathi news channels - Fakht Marathi and Box Cinema - of being involved in an alleged TRP scam. He claimed that after an investigation based on a complaint by an agency working with BARC, it has found that money was paid to watch the channel for certain hours in order to increase ratings. However, just six hours later, Republic Media Network accessed the FIR - based on which Police had undertaken said investigation - and exposed that there was not one mention of Republic TV or any affiliate-entity of the Republic Media Network in it; Instead, the FIR named another news channel. Republic also accessed the complaint based on which the FIR was filed, which concurred that Republic was in no way named. 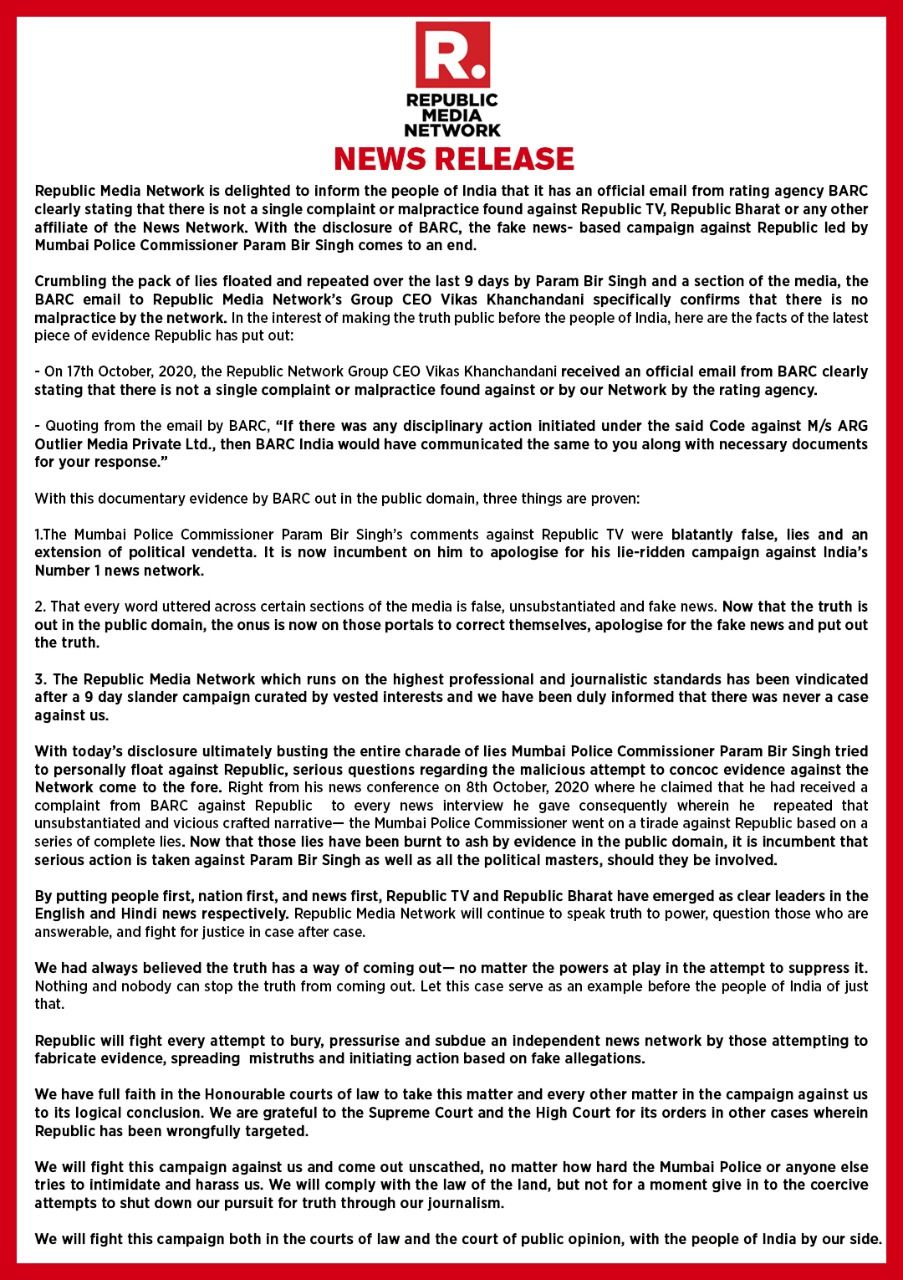