BJP has approached the ECI over a video of AAP leaders Durgesh Pathak and Vijendra Garg where they were seen campaigning for MCD polls late Saturday night. 
BJP has approached the Election Commission (EC) over a video of Aam Aadmi Party (AAP) leaders Durgesh Pathak and Vijendra Garg where they were seen campaigning for MCD polls late Saturday night. In the complaint, the saffron party cited a violation of the Model Code of Conduct and Election guidelines as the campaign for MCD polls ended on December 2. They added that the party leaders were illegally distributing substances (cash & liquor) a day before polls which is prohibited during the silence period.

BJP's national spokesperson Shehzad Poonawalla took to Twitter to share the visual evidence and also the complaint letter sent to the ECI demanding strict action against AAP leaders. In the video, Durgesh Pathak and Vijendra Garg were seen confronted by a man after being stopped by a police officer.

The man can be heard reminding both leaders that the election campaign has been stopped for all the political parties and they are violating the Model Code of Conduct. After the confrontation, both leaders were seen smiling and walking off.

READ | Gujarat polls: 16 seats in Ahmedabad crucial for BJP as apart from Cong, AAP and AIMIM also jump into fray

Shehzad Poonawalla said, "Last night we provided visual evidence of Vijendra Garg and Durgesh Pathak illegally campaigning even though it was stopped. How brazenly they were using illegal materials to campaign and influence the vote despite the fact that it was a silence period. This was done in violation of MCC and all the Election rules as well as guidelines. We (BJP) have approached the Election Commission and have demanded the strictest action as these people were caught red-handed on tapes."

"We urge ECI to give directions to register an FIR and the strictest action should be taken against them. We know this government (AAP) is a government of the Sharab Mafia and therefore they have the access to the cash and liquor that was collected during the Liquor scam. This was the operation they were carrying out last night when they were caught."

On the basis of video evidence of violation of MCC & Election guidelines last night by Durgesh Pathak & Vijendra Garg of AAP, @BJP4Delhi has approached EC for strictest action 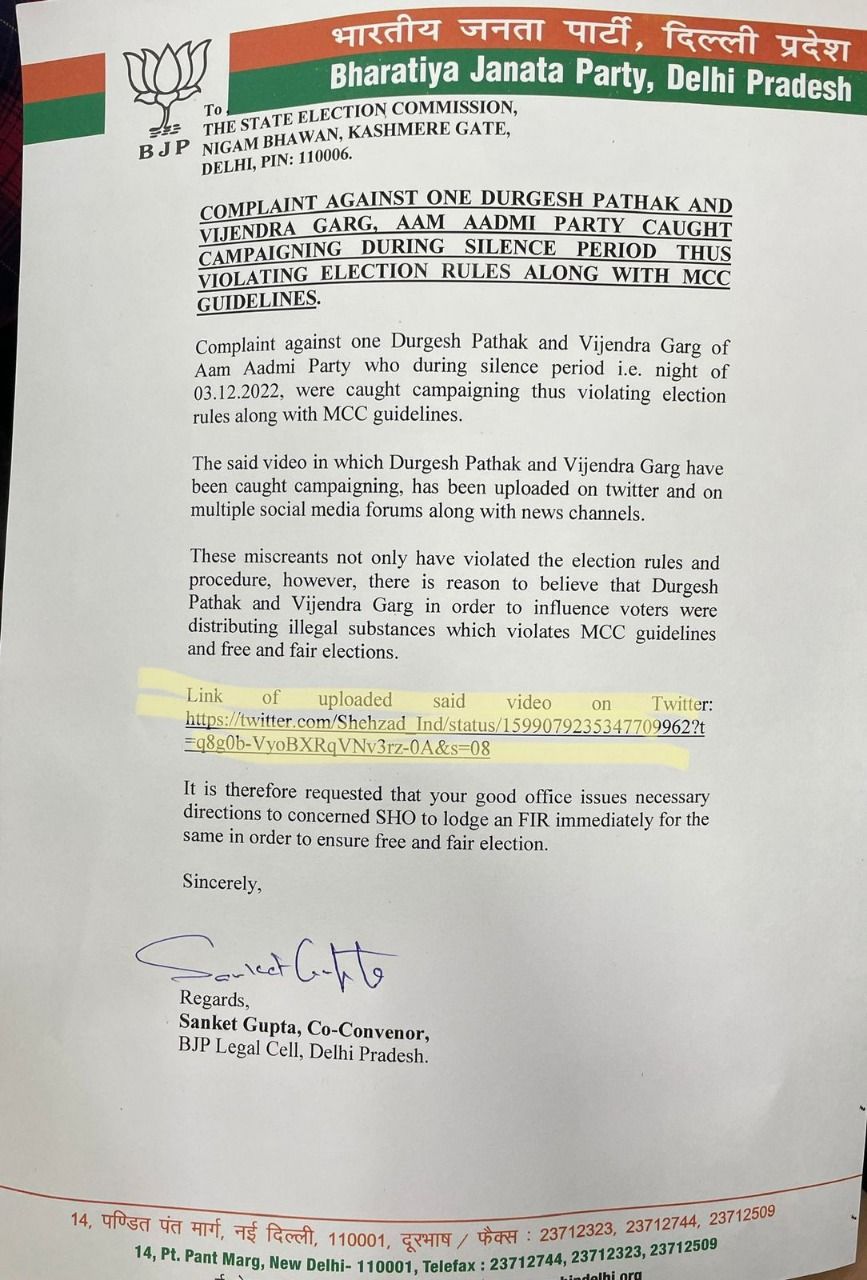 It is pertinent to mention that the polling for MCD elections in the national capital is currently underway setting the stage for the high-stakes civic polls largely seen as a three-way contest between the BJP, the AAP, and Congress. The results of the polls will be announced on December 7.