Sand moves up through the air as the gigantic bull 'Vengai' kicks up dirt by lowering its horn as soon as it sights a few men. Its bellow becomes more powerful when they try to walk closer and stops when they stand still. 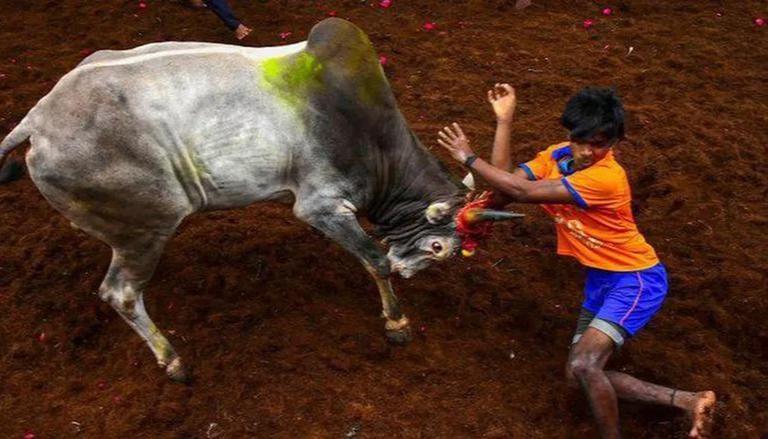 
Sand moves up through the air as the gigantic bull 'Vengai' kicks up dirt by lowering its horn as soon as it sights a few men. Its bellow becomes more powerful when they try to walk closer and stops when they stand still.

The farmland of P Rajasekaran, President of Jallikattu Peravai-Tamil Nadu is buzzing as the sport's annual season nears. 'Seriyadikkuthu', he says referring to the bull's roar, a word largely unknown to people in urban areas.

The Tamil word denotes a loud sound made by the bull. "That sound is the first signal that he has noticed people in his turf and he is ready for a fight." Pointing to the animal rubbing its horn against the tree, he says it is a natural way followed by bulls to sharpen their horns.

As familiar people approach to take him for training like 'swimming and running,' the sound he makes diminishes and 'Vengai' gradually stops lowering its horn to knock on the ground. Vengai means leopard and the bull is much larger, taller and heavier than the feline and may weigh nearly a ton. "You need a minimum of two well-built men to control Vengai, to hold the rope on both sides." While regular agriculture related work is on, the focus at his farm in Varichur village in Sivaganga Road near Madurai is on Vengai and other bulls. Given the aggression of the bulls, it does not appear to be easy to handle them unless a person gets the knack of it. When the herdsman shouts, calling another bull 'Sevalai,' it acknowledges immediately by shaking its head and making a sound.

Elsewhere, in another village, G Keerthana, a transperson is busy attending to 'Rudra,' her choice bull. In fact, several bulls are named 'Rudra' or 'Rudran' by people. All smiles, the 33-year old transgender woman says her bulls have won prizes in Jallikattu contests.

Asked how she manages to rear and prepare them for the annual event, she says,'I have milch cows and I am a poultry farmer as well.' She rears as many as eight bulls. She has a team of men to help her attend to the cattle and they say Jallikattu, 'the spice of the season' is the time to rejoice.

Rajasekaran, a veteran of court battles witnessed so far to guard Jallikattu, says the sport has immeasurable intrinsic value and is a way of life in rural regions, with religious, cultural and economic dimensions.

"Jallikattu is the key to protect native breeds," he says. But for the sport, people would sell bull calves to slaughter houses. The tough legal fight has made people understand even better the importance of native breeds, he says.

"Today, the demand for bull calves and bulls is excellent. Don't be surprised about the cost of a bull. It could easily cross Rs 5 lakh depending on the bull. No need to emphasise that the farmer is benefitted immensely." 'Police' Vinoth, a master trainer and bull tamer says he got offers well beyond 'Rs 10 lakh' for his bulls 'Jet Li' and 'Bruce Lee'. He says he declined all such offers.

Rajasekaran says people are emotionally attached to bulls and cows. "Every village has a Kovil Kalai (temple bull). It is dedicated to the temple. No one would dare touch it. People care for it with love and affection." Such bulls are also used for breeding purposes and artificial insemination is avoided. "We are committed to protecting native breeds." People decorate the bulls, offer prayers to the Almighty and perform 'Aarti' for bulls before and after Jallikattu. In keeping with tradition, women who take care of the cattle-shed do not go there during menstruation, he says.

"If a person's bull is tamed in Jallikattu, he would only say that his bull was cheated. We cannot expect him to agree that his bull was defeated. The striking aspect is, you can see him talking to his bull. He would fondly call it by name and shower affection. I saw a person who housed his bull in the hall of his farm house. He and others slept on the verandah." The 66-year old Rajasekaran was a bull tamer and happily shows the scars of injuries he sustained decades ago. He continues to rear bulls. Every year, following Maha Shivaratri, he holds Jallikattu in his native Sakkudi village near Madurai.

Right from 2006-07, when matters directly or indirectly connected to Jallikattu started reaching courts for adjudication, Rajasekaran became a party and impleaded himself. He is a party on all matters in courts related to the annual event.

Also, he successfully mobilised people in southern districts to protect Jallikattu, which led to the founding of Jallikattu Peravai, roughly the 'Jallikattu Forum.' His love for bulls was discernible with portraits of bulls prominently featured in his house. He shows a place in his farm where a memorial was being built for his 'Appu' bull.

Appu became a legend among people for its exceptional reflexes to keep tamers at bay at all times and videos of its performance are available on YouTube. While Appu was tethered to a tree, another bull attacked it and it could not fight back as it was tied. It happened during the end of 2016.