The Government of India has launched a Digital Agriculture mission for 2021 -2025, based on the latest technologies such as artificial intelligence. 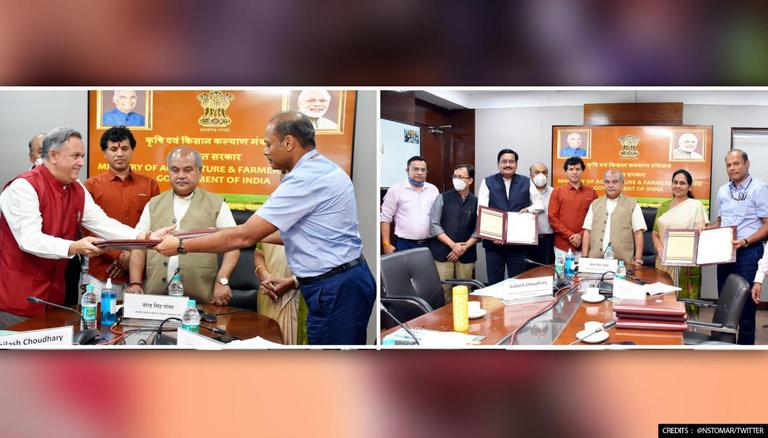 
Union Minister of Agriculture and Farmers Welfare, Narendra Singh Tomar, signed five Memorandums of Understanding (MOUs) with private corporations to advance digital agriculture. As per the Ministry, the MoUs were signed at Krishi Bhavan on Tuesday. The corporations include CISCO, Ninjacart, Jio Platforms Limited, ITC Limited, and NCDEX e-markets Limited (NeML). These initiatives are designed to boost farmers' revenue and ensuring the safety of their crops production.

As per ANI, Union Agriculture Minister Tomar informed, "Based on these pilot projects, farmers will be able to make informed decisions on what crop to grow, what variety of seed to use and what best practices to adopt to maximise the yield." He further added that farmers will also be able to make decisions on whether to sell the products or to store them. "They can even make the decision on when and where to sell, as well as at what value."

The Government of India has  launched a Digital Agriculture mission for 2021 -2025, based on the latest technologies such as artificial intelligence, blockchain technology, remote sensing and Geographic information systems technology (GIS), usage of drones and robotics, and so on, the Ministry of Agriculture and Farmers Welfare stated during the event.

According to the statement by the ministry, digital agriculture also includes public and commercial participants in the agricultural production of inputs and services, as well as logistics. Connectivity, information management, quality of data, standard protocols, security and privacy, as well as fostering innovation, must all be considered while building a digital ecosystem for agriculture.

READ | 'Ready to discuss all provisions of farm laws, but not repeal them': Agriculture Minister

The ministry further stated that the Federated Farmers' database system will be connected by land registration of farmers from throughout the country, and from that, a unique Farmer ID will be generated.

With the help of the database system, all farmers containing information on all privileges and supports of different Central and State Government schemes may be maintained, and this database could be used to acquire information in the future to provide advantages to farmers. The database now contains information on approximately 5.5 crore farmers of the nation.

Earlier, on Friday, Tomar paid a visit to the Saffron Spice Park of the Indian International Trade in Pampore, Jammu and Kashmir. He was joined by Kailash Choudhary, Minister of State for Agriculture and Farmers Welfare, and Shobha Karandlaje, Minister of State for Agriculture. At the event, the Union Minister stated that the Central government, led by Prime Minister Narendra Modi, was willing to provide all possible assistance and support to farmers.

This visit was part of a nine-week public outreach campaign in Jammu and Kashmir by the Central government. The ministerial delegation also met with farmers to learn more about the challenges they face in their sector. Farmers expressed their concerns to visiting officials, who promised them that their reasonable requests will be fulfilled.

READ | 'Pushkar Singh Dhami to be sworn in as Uttarakhand CM on July 3': Narendra Singh Tomar