Rejecting the NYT report, Centre called it "completely baseless and false" while adding that it is not backed by any evidence & based on distorted estimates 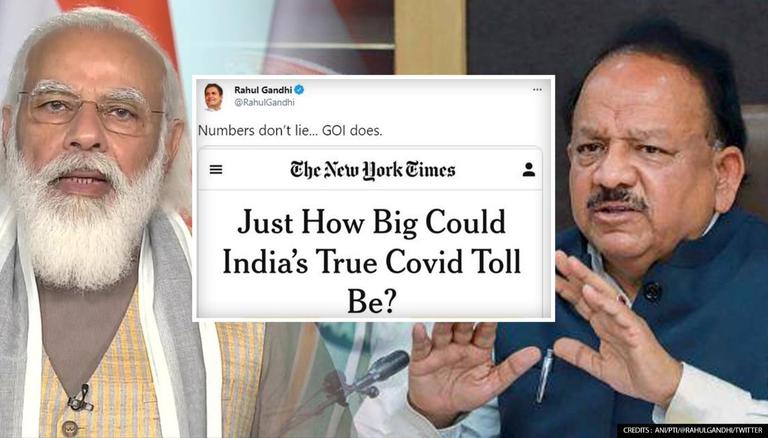 
The Government of India on Thursday hit back at the New York Times for its report on the COVID-19 toll in India, which was picked up by ex-Congress President and Wayanad MP Rahul Gandhi to target the Centre over the management of the COVID-19 crisis in the country. Rejecting the report outright, the Government called it "completely baseless and false" while adding that it is not backed by any evidence and based on distorted estimates.

"NYT report on COVID-19 toll in India completely baseless & false; not backed by any evidence and based on distorted estimates": Government responded according to PTI.

Rahul Gandhi on Wednesday took to Twitter to post a screenshot of the infographics from the New York Times (NYT) report, showing excessively spiked up numbers of the COVID-19 infections and deaths in India. Posting the infographics Rahul Gandhi said, "Numbers don't lie, GOI does."

The report published on May 25 showed India in a dire situation owing to the COVID-19 crisis. While presenting the official COVID-19 numbers of India as of May 25, the report also presented three scenarios giving estimated numbers of infection and deaths due to COVID-19 which were much higher than what is being reported by the government.

The report claimed the official COVID-19 figures of India "grossly understate the true scale of the pandemic" while adding that getting a clear idea of the situation is difficult due to "poor record-keeping and a lack of widespread testing". The report also alleged that India's highest daily death toll was also "most likely still an undercount".

It is pertinent to note that testing has been ramped up in India during the second wave of COVID-19. While the number of testings for COVID-19 ran in a little over 10 lakh tests during the first wave, the testing has now been doubled in the second wave with over 20 lakh tests on a daily basis. On Thursday, Union Health Ministry figures stated 21,57,857 tests have been conducted during the previous day. Indian Council of Medical Research (ICMR) on Wednesday informed that a total of 22,17,320 COVID-19 tests were conducted on May 25 across the country, the highest number of tests conducted in a single day globally. India stands second, only next to the US in terms of cumulative COVID-19 tests in the world, with 33,69,69,353 samples tested till date.