Chandrayaan 2 LIVE Updates: Landing Expected Around 1:30 AM On 7 Sept

India is all set to create history in space with hours left for the moon landing of Chandrayaan-2’s 'Vikram' lander, which is planned to take place on Saturday between 1.30 a.m and 2.30 a.m.

"This is Mission Control Centre. Vikram Lander descent was as planned and normal performance was observed up to an altitude of 2.1 km. Subsequently, communication from Lander to the ground stations was lost. Data is being analyzed": ISRO

This is Mission Control Centre. #VikramLander descent was as planned and normal performance was observed up to an altitude of 2.1 km. Subsequently, communication from Lander to the ground stations was lost. Data is being analyzed.#ISRO

PM Modi speaks to the scientists at the ISRO Centre, asks them to be courageous.

#LIVE | There are ups and downs in life. This is not a small achievement. The nation in proud of you. Hope for the best. I congratulate you. You all have done a big service to nation, science and mankind. I am with you all the way, move forward bravely: PM Modi at ISRO pic.twitter.com/m3P08xuYVt 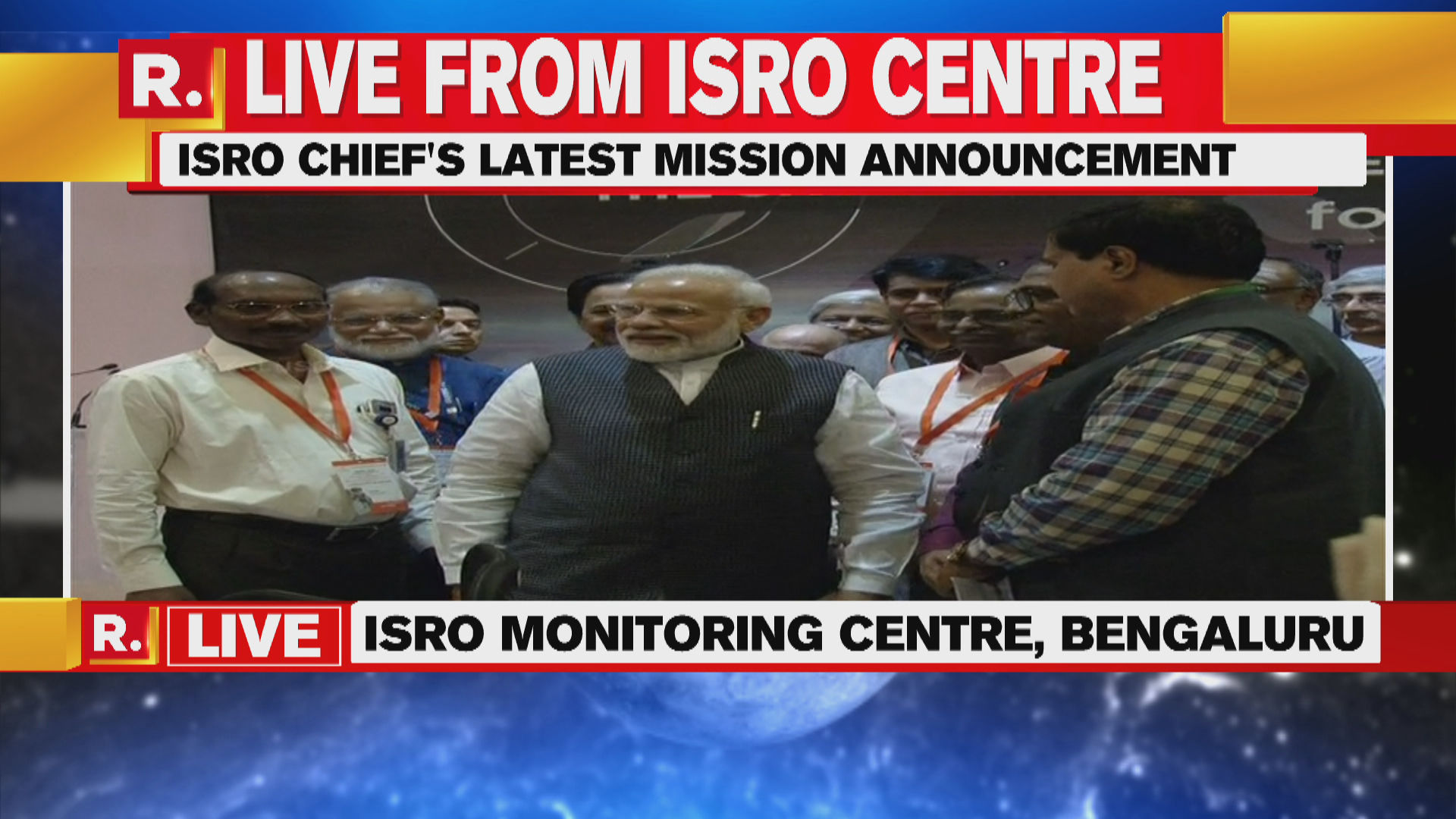 The status of the lander Vikram of Chandrayaan 2 is about to be confirmed by the ISRO mission control centre. 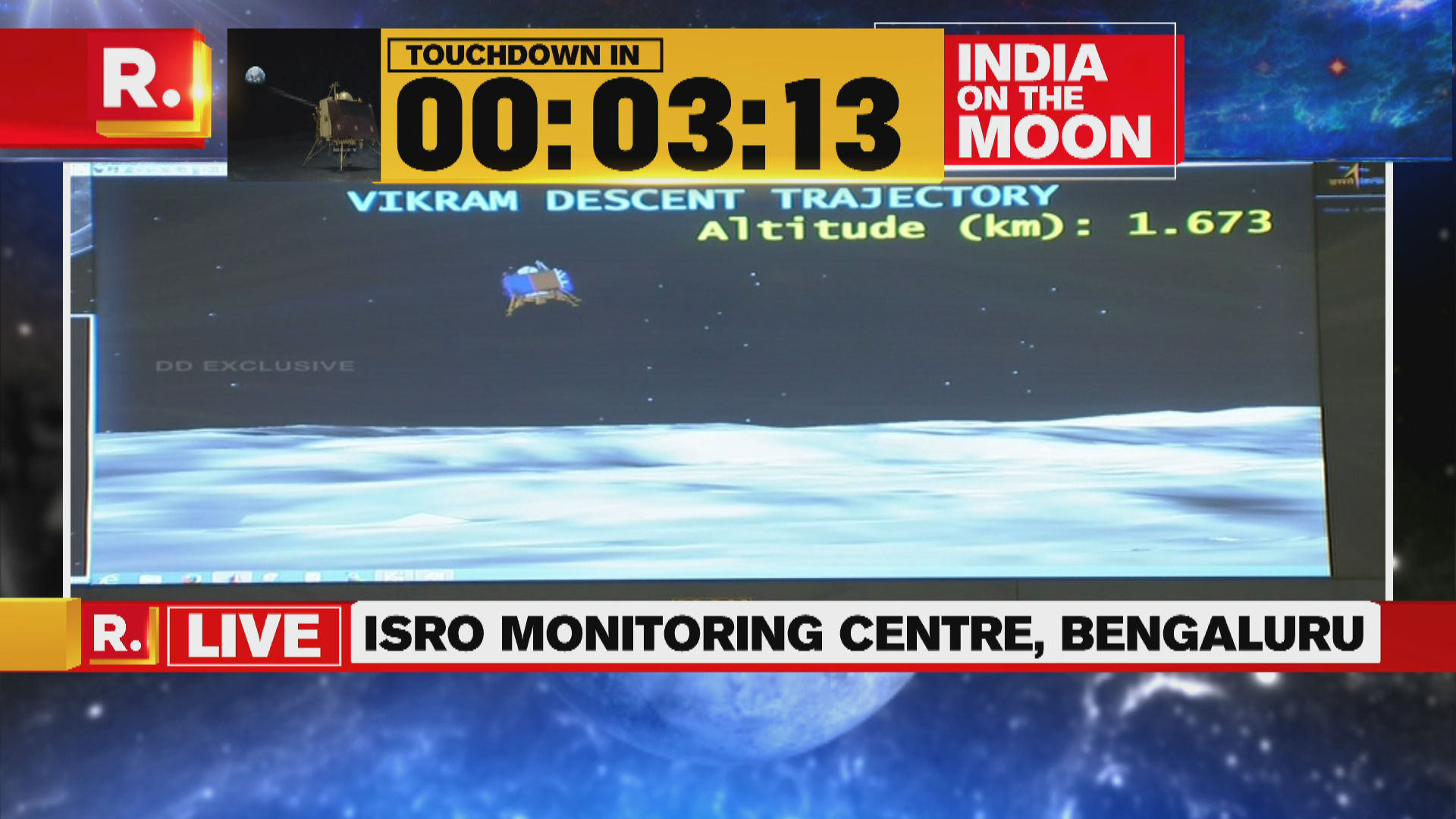 The Rough braking of Vikram Lander has begun. 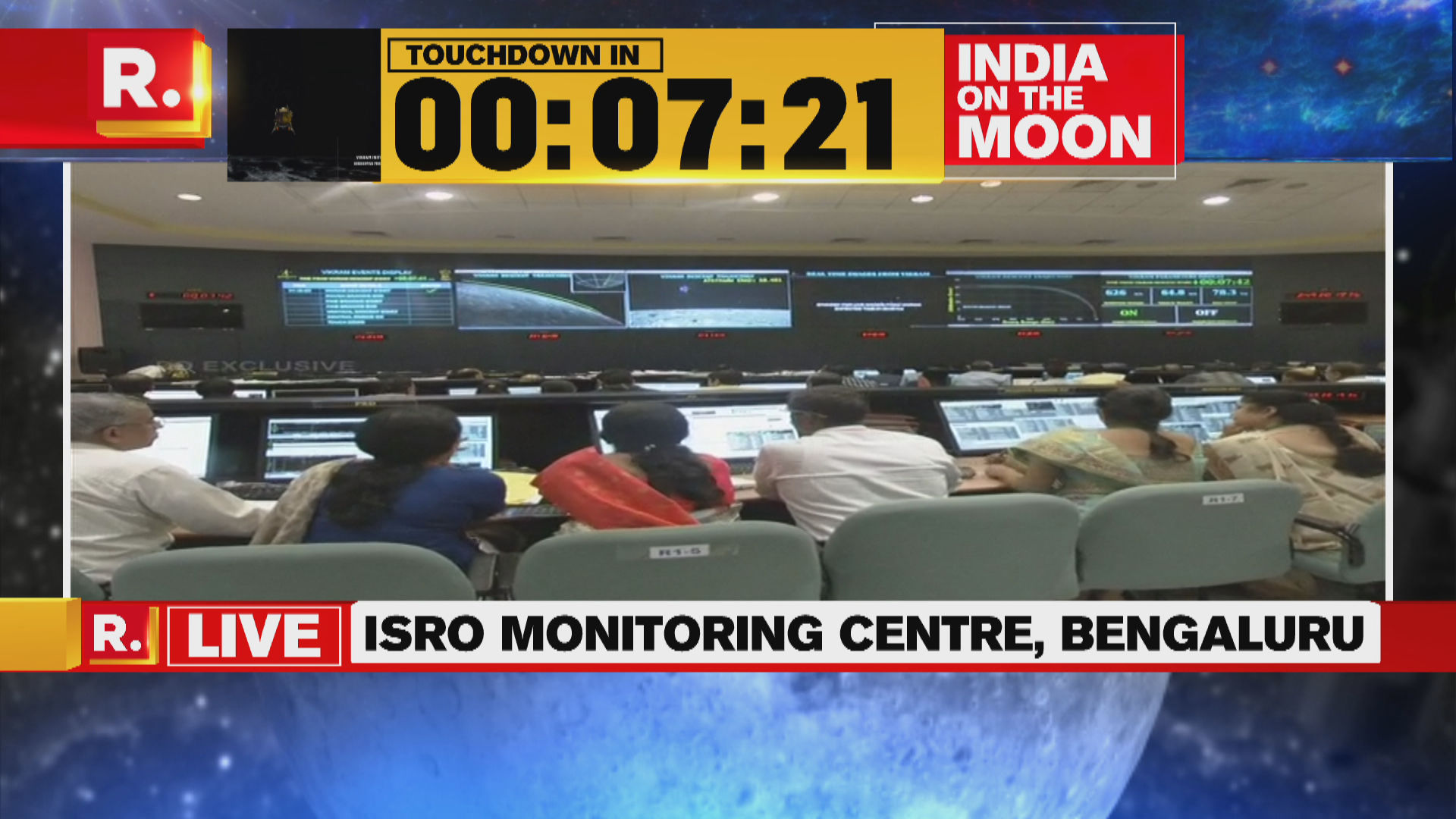 Chandrayaan 2 has begun its descent sequence at the moon. 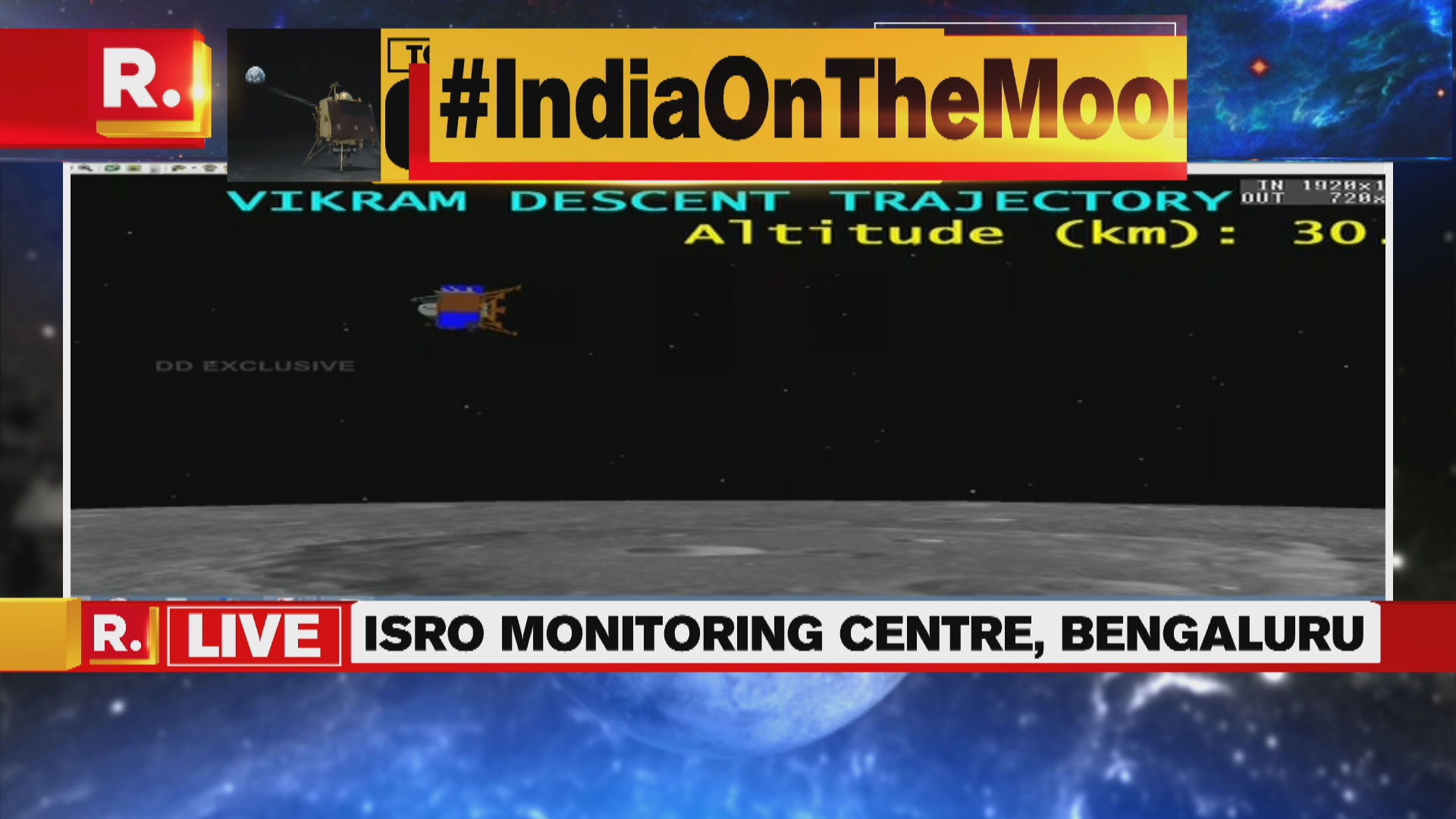 ISRO Chief K Sivan briefs PM Modi about the status of the mission. He meets the scientists and other officials at the Centre. 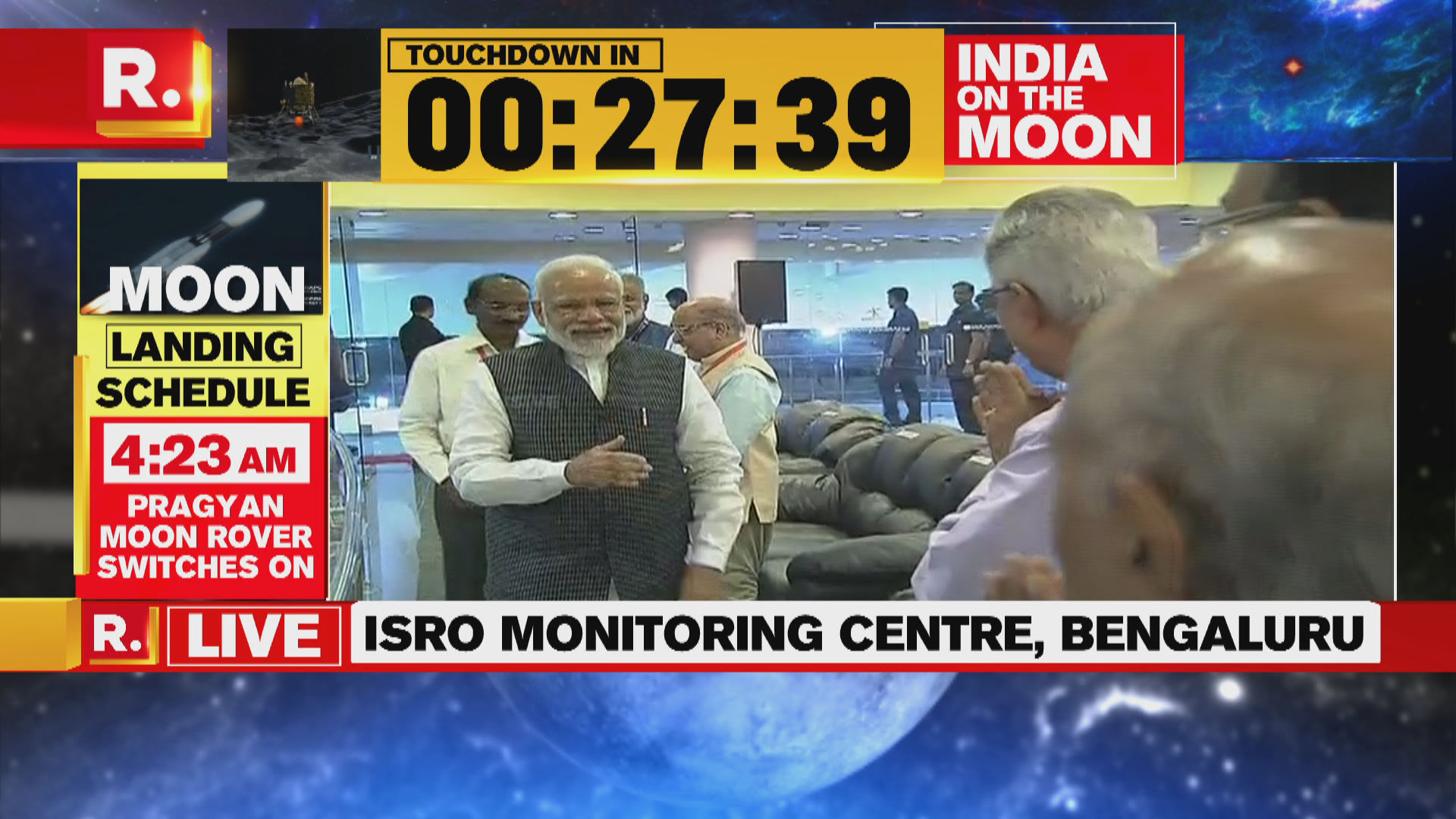 PM Modi arrives at Bengaluru's ISRO Monitoring Centre ahead of the Chandrayaan 2 landing. 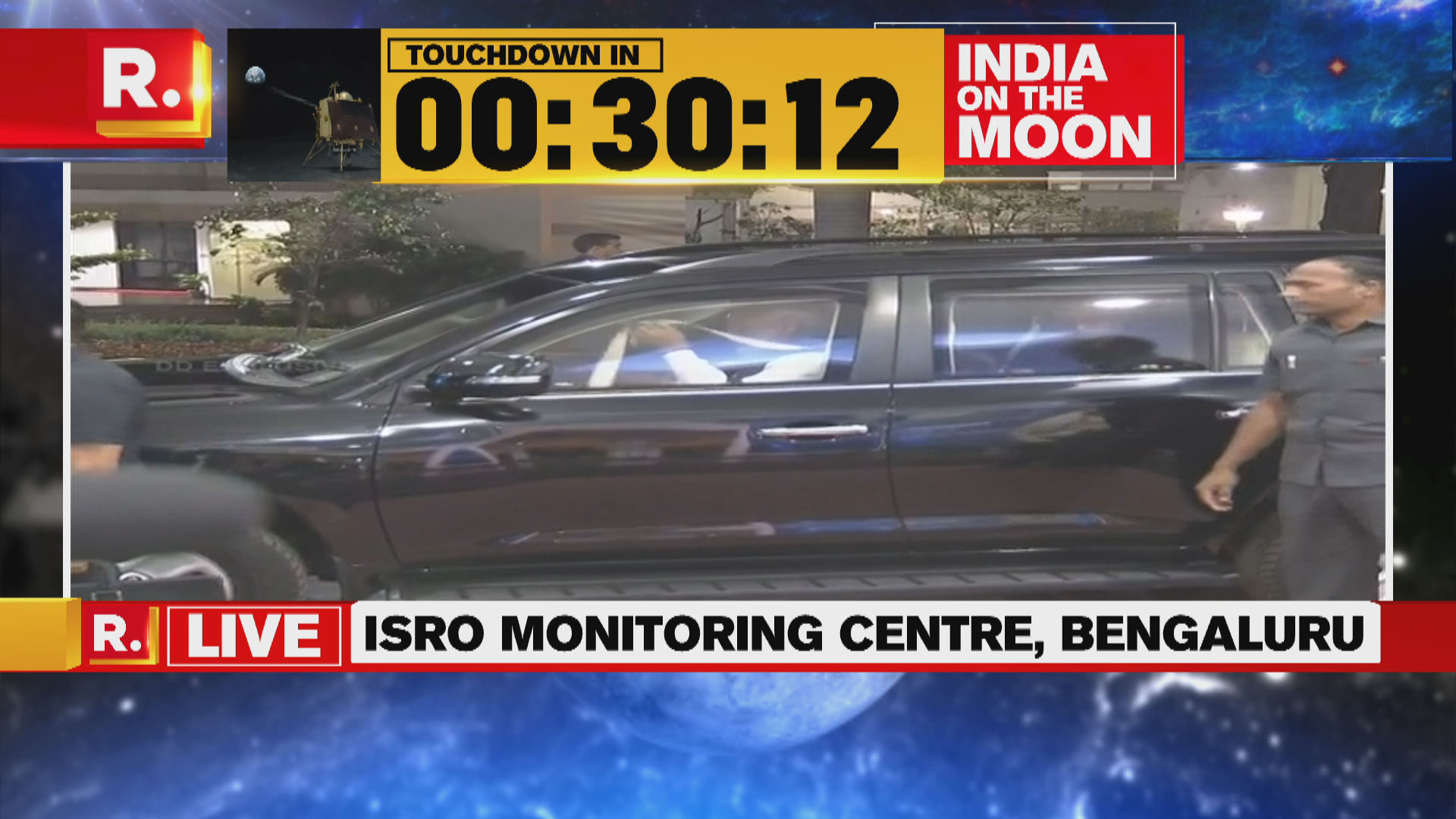 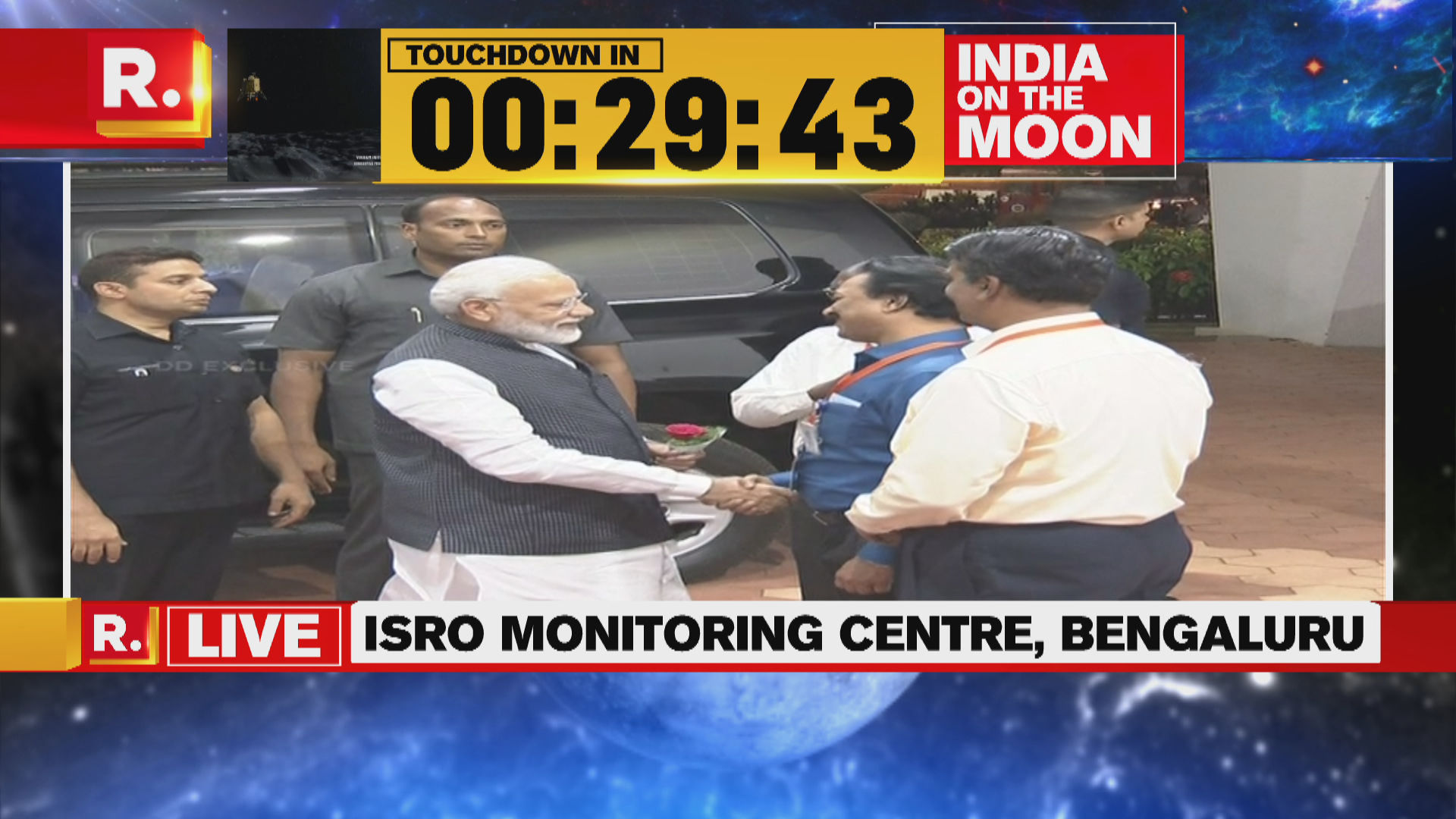 It is less than 40 minutes to go for India to land on the moon:

As India gets ready for bed....our dreams get closer to landing on the moon!! Wishing all the luck and magical charms to @isro for a safe, successful touchdown to #VikramLander !! 🌔🇮🇳 #ToTheMoonAndBack #Chandrayaan2

With less than 1 hour to go, ISRO has commenced their live stream of the moon landing mission from the ISRO Monitoring Centre in Bengaluru. Bollywood actor Anupam Kher extends best wishes to the ISRO team and hopes for the successful landing of Chandrayaan-2 on the moon.

Good luck to @isro and people of my country, India for hopefully a successful landing of #Charayaan2 on moon. Proud of our scientist. History in the making. Jai Hind.🙏😍🇮🇳🇮🇳 #TirangaOnMoon pic.twitter.com/x9cNvHoDse

Amazon CEO Jeff Bezos roots for Team India as the country set ahead to create history in the space:

Spiritual leader and founder of the Isha Foundation Sadhguru took to Twitter and posted a message for ISRO:

India and @isro scientists at the brink of creating history. Soft landing on the moon will soften every Indian heart. -Sg #Chandrayaan2 #ISRO #Moonmission 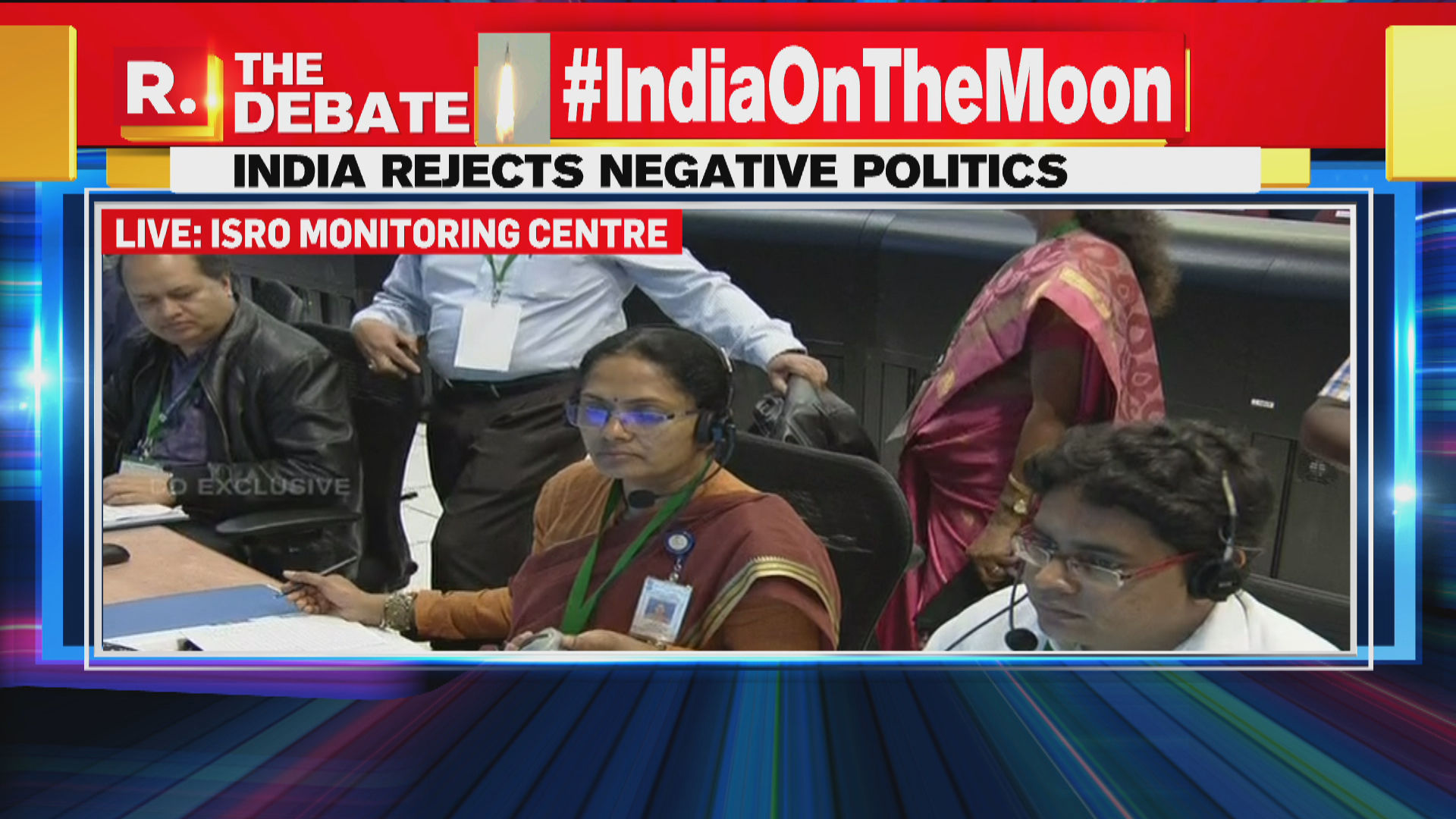 PM Modi arrives in Bengaluru ahead of the Chandrayaan-2's moon landing. He will be witnessing the historic moment from ISRO control room in Bengaluru. 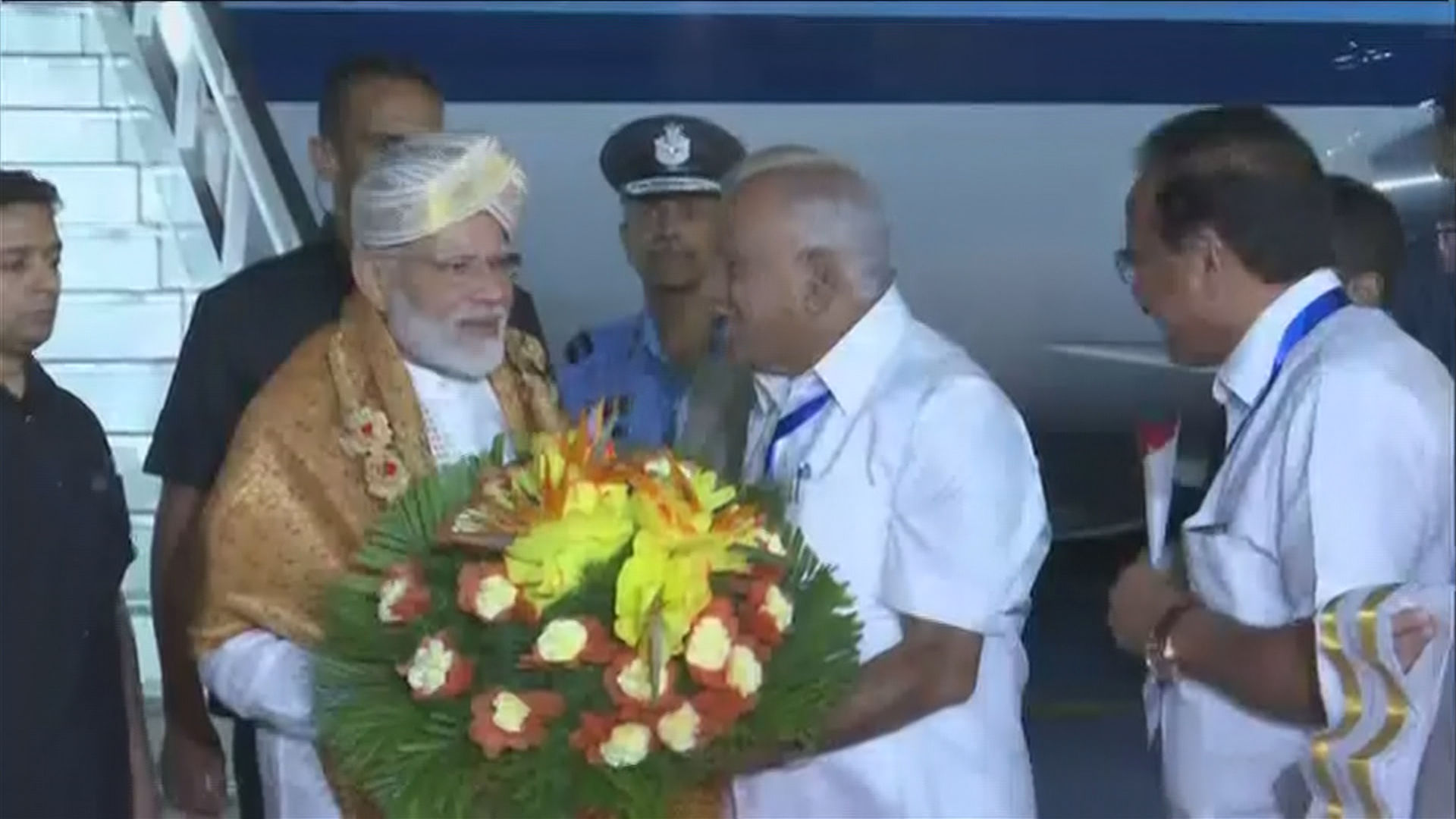 India is all set to create history in space with hours left for the moon landing of Chandrayaan-2’s 'Vikram' lander, which is planned to take place on Saturday between 1.30 a.m and 2.30 a.m. As soon as the lander will touchdown the moon surface, the three payloads of 'Vikram' will be activated, after which the rover 'Pragyan' housed inside 'Vikram' will roll out to carry investigations of the lunar soil. ISRO (Indian Space Research Organisation) has stated that the ‘Pragyan’ can only communicate with the lander, and the ‘Vikram’ can communicate with IDSN (Indian Deep Space Network) at Byalalu near Bengaluru, as well as with the orbiter and rover.

Following the successful touch-down on the moon, India will acquire the fourth place in the list of countries which have achieved a soft-landing on the moon after Russia, the US and China. India is the first country to launch a mission to the unexplored south polar region on the moon.

We have the same wishes for Vikram, Orbiter.
Want to stay in touch with Vikram and Pragyan as they make their way to the untouched lunar South Pole and uncover its many mysteries? Then keep an eye out for the next edition of #CY2Chronicles! pic.twitter.com/2iA8W2lxtR

On Friday, ISRO Chairman K Sivan assured that things are progressing as per the plan for the mission. Expressing excitement over the highly-awaited mission, Sivan added that there is a lot of anxiety in the minds of the Chandrayaan-2 team because of the complex nature of the operation. A senior official associated with the mission also described the soft-landing of the ‘Vikram’ rover as "almost like placing a baby in the cradle", and said, "there is a certain amount of anxiety but there is no fear,” as reported by news agency PTI. Speaking to Republic TV, K Sivan explained about the landing manoeuvres and the crucial 15 minutes of descent and landing.

"This 15 minutes travel of lander is new to ISRO. It is the first time we are going to another body where there is no atmosphere and using the propulsion system we will have to break the velocity and bring the vehicle safely to soft land. To achieve this we will have to balance between the gravity and thrust. So we have to modulate the thrust of the engine," the ISRO chief said.

The ISRO Chairman, speaking about Chandrayaan-2 going to the South Pole of the moon, said that it is the place where nobody else has gone. According to ISRO, the lunar South Pole is especially interesting because of the lunar surface area here that remains in shadow is much larger than that at the North Pole and there was a possibility of the presence of water in permanently shadowed areas around it.

PM Modi to watch the moon landing at ISTRAC

PM Modi, along with the dozens of students from across the country selected by ISRO through an online quiz, will be watching the historic moment from the ISRO Telemetry Tracking and Command Network (ISTRAC) in Bengaluru. PM Modi also wished success to ISRO, saying that the mission manifests the best of Indian talent and spirit of tenacity. Taking to Twitter PM Modi posted a series of tweet stating that the nation is eagerly waiting for the event.

The moment 130 crore Indians were enthusiastically waiting for is here!

In a few hours from now, the final descent of Chandrayaan - 2 will take place on the Lunar South Pole.

India, and the rest of the world will yet again see the exemplary prowess of our space scientists.

What are Vikram and Pragyan?

Weighing 1,471-kg, the 'Vikram' lander is named after Dr Vikram A Sarabhai, father of the Indian space programme. It is designed to execute a soft landing on the lunar surface, and to function for one lunar day, which is equivalent to about 14 earth days. The 27-kg robotic vehicle 'Pragyan' ('wisdom' in Sanskrit) has the potential to travel upto 500  metres from the landing spot on the Moon and leverages solar energy for its functioning. ISRO has also informed that the Vikram lander is carrying three scientific payloads to conduct surface and sub-surface science experiments, while the rover carries two payloads to enhance our understanding of the lunar surface. The Chandrayaan-2 orbiter’s mission life is one year, while that of the lander and rover will be one lunar day which is equal to 14 earth days.