With former Union minister P Chidambaram missing amid the developments in the INX Media case, the Sonia Gandhi-led Congress party appears to be divided over its support for the senior leader. In an unprecedented development, Haryana Pradesh Congress Committee (HPCC) chief Ashok Tanwar on Wednesday took to social media and made a big charge at Chidambaram.

Responding to a tweet put out by Sanjay Nirupam attacking the CBI for issuing notice to the former Finance Minister, Ashok Tanwar claimed that Chidambaram treated Congress workers like "thieves" when he was the minister. However, shortly after putting out the tweet, Haryana Congress chief Ashok Tanwar deleted it from his social media handle. Tanwar was responding to Sanjay Nirupam's tweet in which the Congress leader said that lookout notice for Chidambaram is a bit too much and former Home Minister and Finance Minister being treated like a thief is "not good at all".

Read the screengrab of the deleted by Ashok Tanwar here: 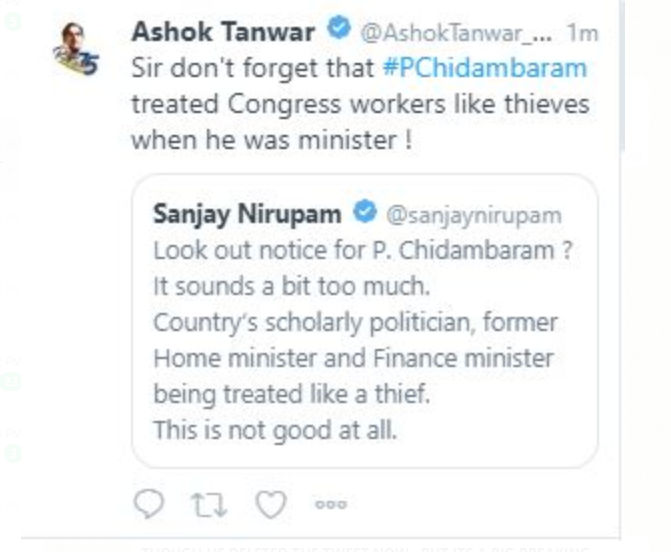 READ | Chidambaram missing amid agencies' search, here's where he could be

Congress divided on probe against Chidambaram

Ashok Tanwar's tweet came shortly after former Congress president Rahul Gandhi took to Twitter and alleged that the Centre is misusing its power. In a tweet on Wednesday, Rahul Gandhi said that the Centre under PM Modi is attempting a 'character assassination' of the former Home minister by suing the ED and CBI.

Chidambaram's lawyer and Congress leader Abhishek Manu Singhvi also went on to refute the claims of non-cooperation made by the ED and CBI. Speaking in the matter, he said that he is still an accused in the INX media case, however, not a convict, he added.

#LIVE on #ChidambaramMissing | ED called him 8-9 times, he has always responded. He is co-operative: Abhishek Manu Singhvi, senior Congress leader

On Tuesday, the Delhi High Court rejected Chidambaram's anticipatory bail plea in the INX media case. Shortly after the announcement of the Delhi DC, a team of CBI and the ED reached Chidambaram's Delhi residence on late Tuesday evening only to return empty-handed since the Congress leader was not at his home. As per sources, he has been missing since the evening. In a recent development, top agency sources told Republic on Thursday that Chidambaram is within 15-20 kilometres of his Jor Bagh residence.