Exclusive details issued by ED have been accessed which reveals details of money-laundering in seven companies for which P Chidambaram is being probed.

In a sensational development amid the lookout notice issued for senior Congress leader P Chidambaram by the CBI in the INX Media case, Republic TV has accessed exclusive documents issued by the Enforcement Directorate on Wednesday. The documents reveal details of money-laundering frauds of not just one but as many as six companies under which the former Finance Minister is being allegedly probed the investigative agency.

The document states that the "main offence against P Chidambaram revolves around illegal FIPB (Foreign Investment Promotion Board) approvals given by the former Finance Minister in several cases as well as receipts of kickback by his son Karti Chidambaram in lieu of the illegal acts." The clincher further named the firms which were granted illegal FIPB approvals by P Chidambaram and are under investigation by the CBI and ED:

The document further states that the CBI is also investigating shell company floated by P Chidambaram's son Karti on the name of his employee and other business associates.

"During the investigation, several shell companies of Karti Chidambaram both in India and outside have been identified in which kickbacks received illegal favours granted by his father were deposited. In one of the shell companies, deposits of more thant Rs 300 crore have been made," the statement further reads.

It has also been clarified in the documents that the shell company of Karti Chidambaram have also received huge payments from company located in British Virgin Islands and is figured to be Panama papers. The ED, in its document, has also alleged that both P Chidambaram and son Karti have "not cooperated during the interrogation" and "deliberately refused to divulge information about their investments" in foreign bank accounts and immovable properties in several countries. 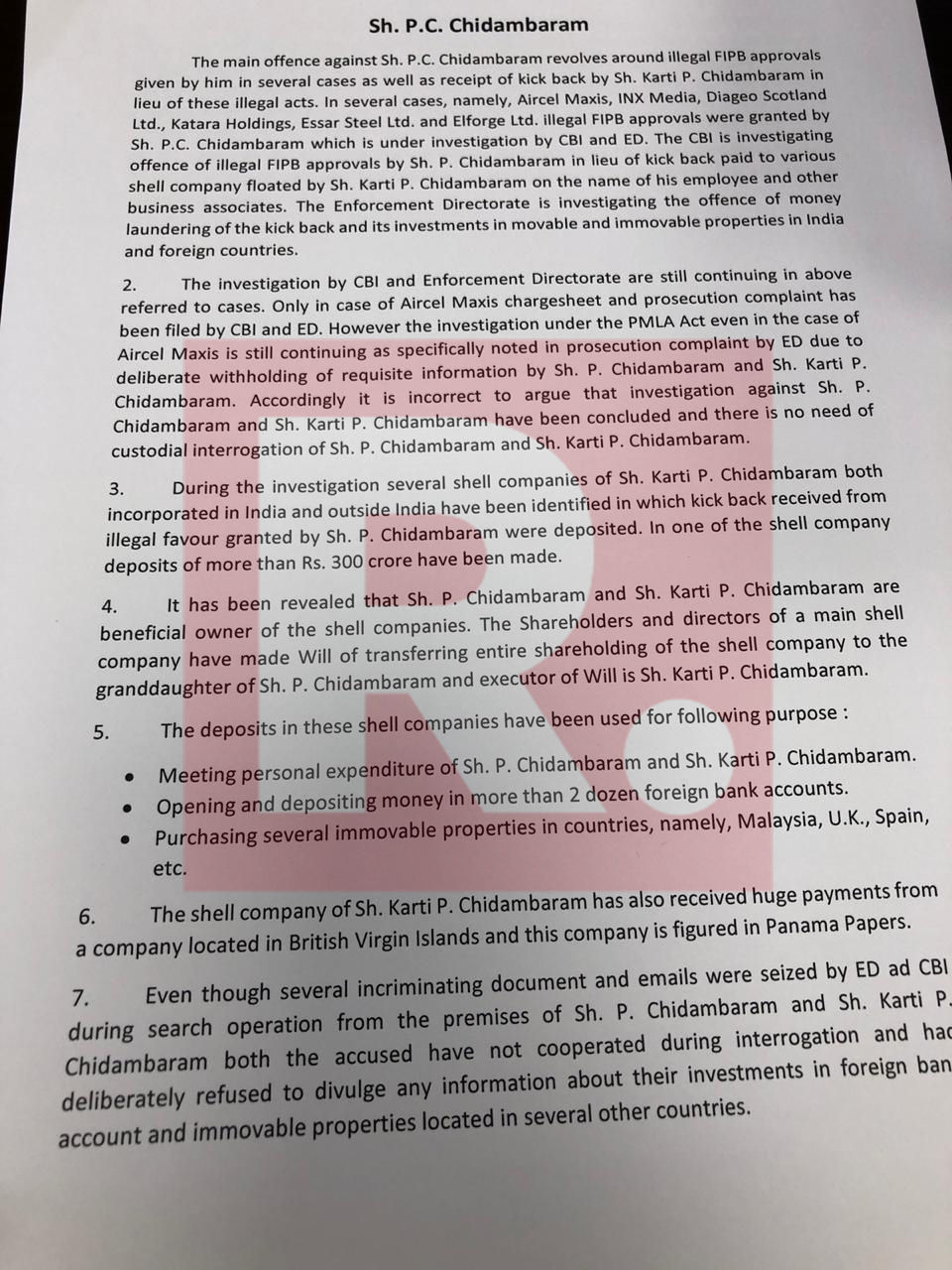 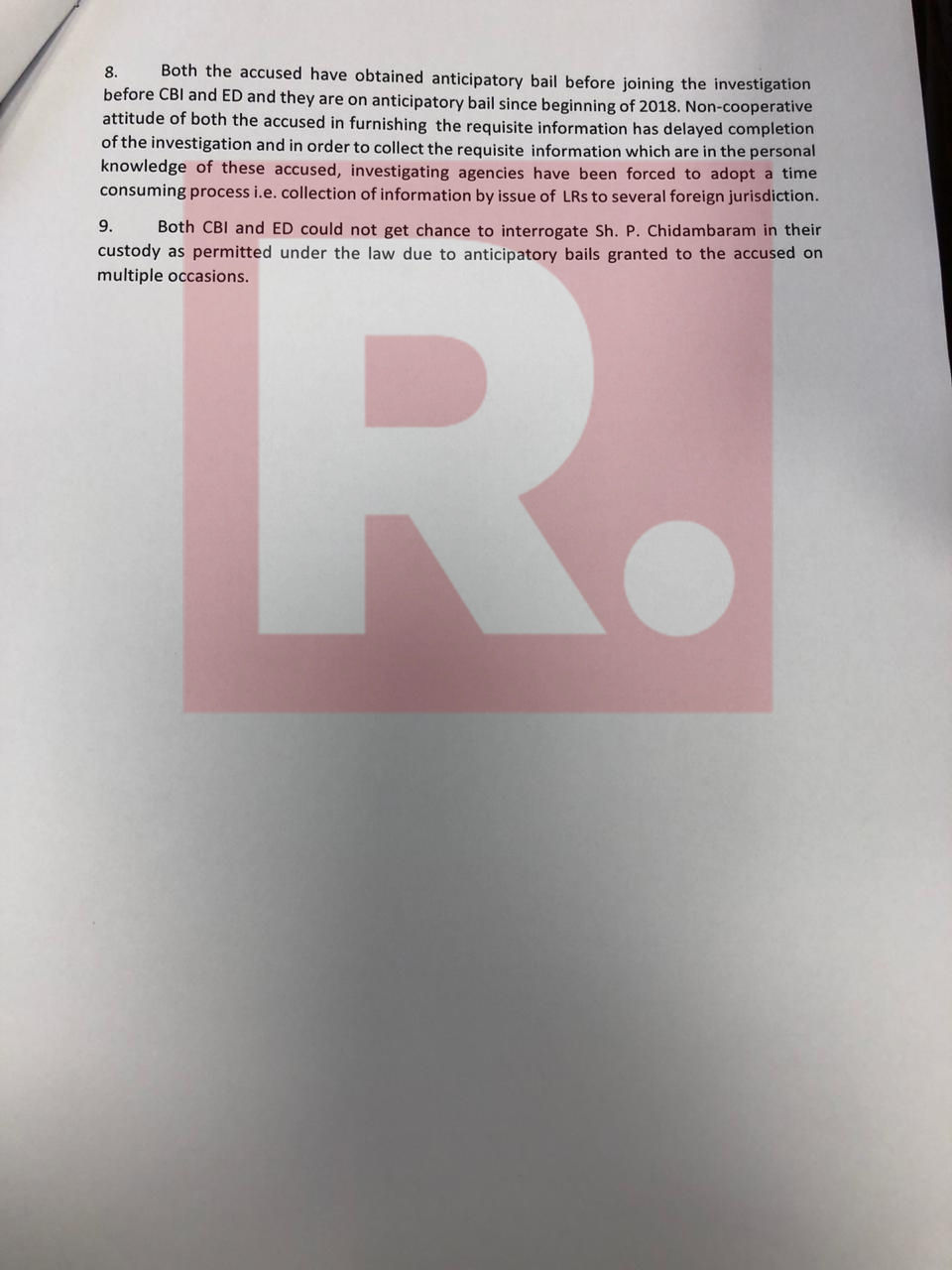 Congress divided on probe against Chidambaram

Even as former Union minister P Chidambaram is missing amid the investigation by the CBI and ED in the INX Media case, the Sonia Gandhi-led Congress party appears to be divided over its support for the senior leader. Earlier on Wednesday, Haryana Congress chief took to social media and made a big charge at Chidambaram. Ashok Tanwar claimed that Chidambaram treated Congress workers like "thieves" when he was the minister. However, shortly before his tweet, Rahul Gandhi, backing Chidambaram, said that the Centre under PM Modi is attempting a 'character assassination' of the former Home minister by suing the ED and CBI.

READ | Chidambaram missing amid agencies' search, here's where he could be

On Tuesday, the Delhi High Court rejected Chidambaram's anticipatory bail plea in the INX media case. Shortly after the announcement of the Delhi DC, a team of CBI and the ED reached Chidambaram's Delhi residence on late Tuesday evening only to return empty-handed since the Congress leader was not at his home. As per sources, he has been missing since the evening. In a recent development, top agency sources told Republic on Thursday that Chidambaram is within 15-20 kilometres of his Jor Bagh residence.