While the former Union Minister P Chidambaram is allegedly not traceable after the Delhi High Court rejected his anticipatory bail plea, and his counsel is appealing for interim relief from arrest in the Supreme Court, netizens have their own theory about his whereabouts. On Wednesday, the CJI referred the plea seeking interim relief from arrest to the registrar who will now decide the bench for hearing. The CBI, on the other hand, has filed a caveat plea over his plea saying his arrest is important for custodial interrogation as he has been evasive.

Even as sources say that CBI is actively looking into the whereabouts of the former union minister, netizens pulled out an old tweet by England pacer Jofra Archer and compared it to Chidambaram's current situation. Here is the tweet:

What a legend. Jofra Archer predicting the arrest of P Chidambaram. There has to be a Jofra Archer tweet for everything💯🔥😂🤣🙏 #ChidambaramMissing https://t.co/VloICcxafM

READ: Chidambaram missing amid agencies' search, here's where he could be

Netizens also brought out a similarity between Chidambaram and Chandrayaan

Congress defends Chidambaram, but there are internal tussles:

As a lookout notice has been issued by the agencies against P Chidambaram after he allegedly remains untraceable after the Delhi High Court rejected his anticipatory bail plea in the INX media case, former Congress president Rahul Gandhi alleged that the Centre is misusing power. In a tweet on Wednesday morning, Rahul Gandhi said that the Centre under Prime Minster Narendra Modi is attempting a 'character assassination' of the former finance minister.

His lawyer and Congress leader, Abhishek Manu Singhvi refuted the claims of non-cooperation by the ED and CBI against Chidambaram in the INX media cae. He said that the CBI had summoned him only once when he went, and ED had summoned him 9 to 10 times when he cooperated. He then added: "We have to see if it is prosecution or persecution." Singhvi also spoke in the similar lines to that of Rahul Gandhi saying: "If you say they are great, then they will not touch you." He also said in a tweet that Chidambaram is not an absconder as he was with Sighvi till 06:30 on Tuesday evening.

However, in an unprecedented development, Haryana Pradesh Congress Committee (HPCC) chief Ashok Tanwar on Wednesday took to social media and made a big charge at Chidambaram. Read the screengrab of the deleted by Ashok Tanwar here: 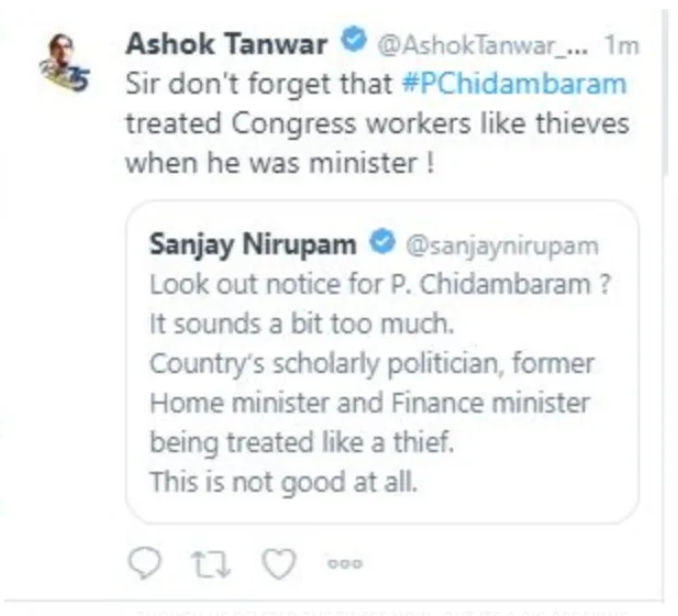