Congress Leaders To Meet & Declare Stand Ahead Of Ayodhya Verdict

AICC General Secretary, KC Venugopal issued notice on Friday stating that CWC has called a meeting on Saturday at 9:45 am to take a stand on the Ayodhya dispute

Ahead of the monumental Supreme Court verdict on the prolonged Ayodhya land dispute, the All India Congress Committee (AICC) General Secretary, KC Venugopal issued a notice on Friday stating that Congress Working Committee (CWC) has called a meeting on Saturday at 9:45 am to take a stand on the Ayodhya dispute. The notice states that the CWC will meet and discuss its stand on the verdict and then release the official version of the Congress Party. The notice signed by the General Secretary also prohibits all Congress Party functionaries, office bearers, and leaders from speaking before the media.

READ | Ayodhya Land Dispute: All You Need To Know About The Parties Involved

AICC issues to notice to party ahead of Ayodhya Verdict 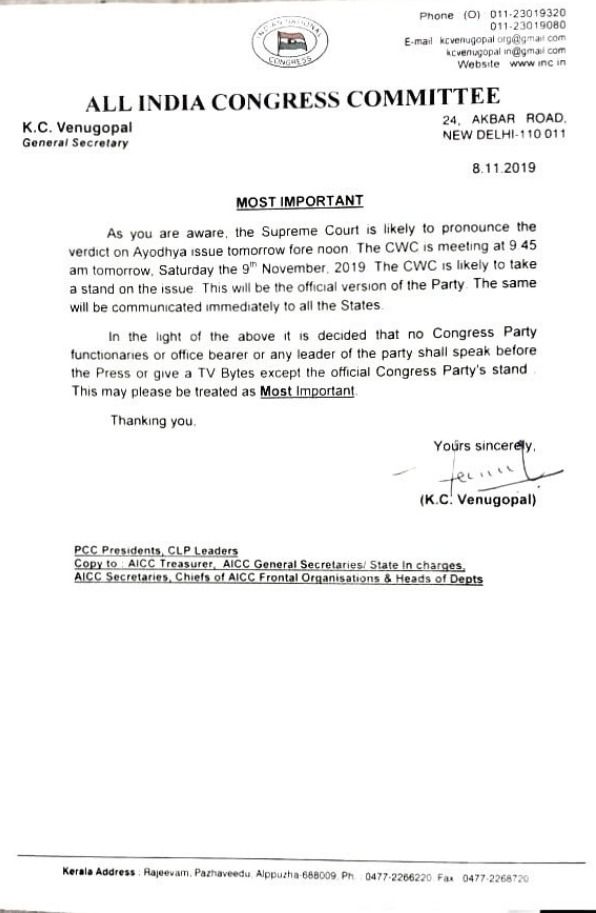 The long wait for the Ayodhya case verdict will come to an end on Saturday. According to the information given by the additional registrar of the Supreme Court, the apex court will be delivering its final verdict on November 9 at 10:30 am. The Uttar Pradesh Government ahead of the verdict has declared that all schools, colleges, and training centres will be shut from November 9 to November 11.

Various security prevention and other arrangements have been made to ensure peace and harmony in the country once the verdict is pronounced tomorrow. Section 144 has been already been imposed by the state in Kanpur, Bhopal, and Nagpur. A five-judge constitution bench had been hearing day-to-day arguments in the case that lasted 40 days. The final verdict was reserved by the Supreme Court on October 16.

READ | Ayodhya Case Verdict: Security Arrangements Set Up By The UP Govt

Ahead of the verdict, security in Ayodhya has been beefed up. So far, 18,000 police officers, 3,000 state Rapid Action Force staff and 4,000 Central forces have been deployed to maintain law and order. All government and private colleges and schools have been shut in Uttar Pradesh till November 11, announced UP CM Yogi Adityanath on Friday night. Section 144 has been imposed in parts of Ayodhya. According to sources, State Chief Secretary and UP DGP themselves will be on ground zero to monitor the situation. The District Magistrate will be taking an hourly update directly from the Chief Minister's Office. Moreover, Chief Minister Yogi Adityanath will remain in a 'ready to move' position.