The HSSC exams in question are scheduled for October 31, November 1, and 2, and have  8.39 lakh youth appearing. 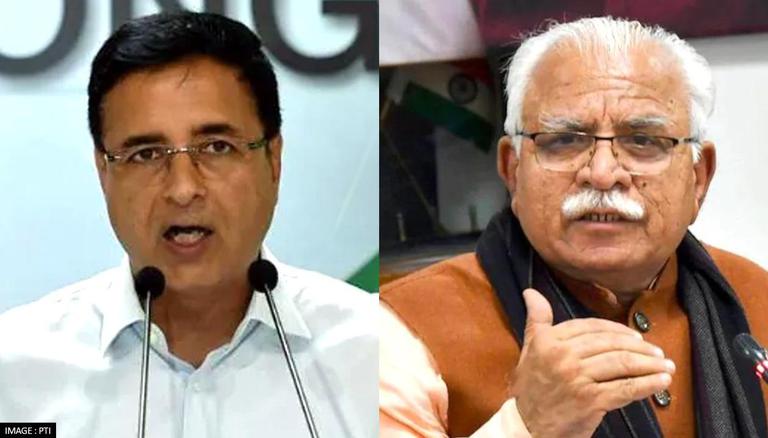 
Dubbing the questions asked in the Haryana police constable exam as 'irrelevant', Congress spokesperson Randeep Surjewala on Monday stated that they would reward CM Manohar Lal Khattar or any of his ministers if they can answer even 30% of the questions.

Randeep Surjewala's statement did not go unnoticed, and Manohar Lal Khattar was in fact quick to respond saying that he will think about it the day he desires to become a police sub-inspector.

Speaking to the media, Randeep Surjewala said, "PhD-level questions on subjects such as botany, zoology, sociology, maths, and international general knowledge were totally irrelevant to either the exam being conducted or the capacity and capability of the candidates."

"The HSSC had mentioned in its advertisement that questions asked will be of the level of Class 12. But the questions asked in the police constable exam are such that neither the chief minister nor the police chief or other top police brass can answer, Randeep Surjewala added.

Manohar Lal Khattar said in retaliation later in the day, "Whether easy or tough, questions are the same for everyone and merit will be decided accordingly."

The Haryana Chief Minister also pointed out that the HSSC is an independent body and the government 'does not interfere in its working'. "Our only concern is that a fair selection is made," he said.

Surjewala questioned why eight sets of question papers were given to the candidates. "Even in UPSC exams, not more than two sets of questions are given and they have the normalization criteria," the Congress leader said.

Responding to the same, Manohar Lal said, "The multiple sets of questions for the constable recruitment exam was the HSSC's method to curb chances of adopting unfair means and should be appreciated."

Alleging 30 papers leaks in different recruitment exams, Surjewala said, "However, not a single person has been convicted. Not a single connection of those paper leak mafia to those sitting in the citadels of power has been exposed."

Manohar Lal, in retaliation to the claim, said it was not the first time that such an incident has happened but that the present government has ensured that culprits are caught.

Manohar Lal Khattar pointed out that 5 FIRs were filed and quashed during Congress' tenure. "During our time, we got 42 FIRs registered. Whenever anything comes to notice, we take a strong cognizance not hush them under the carpet, which was the practice during the previous regime," the CM said.

The HSSC exams in question are scheduled for October 31, November 1 and 2, and have 8.39 lakh youth appearing.