Pooja Gupta, who attended his seminar earlier this week, filed a complaint against the hairstylist for spitting on her head and humiliating her in public. 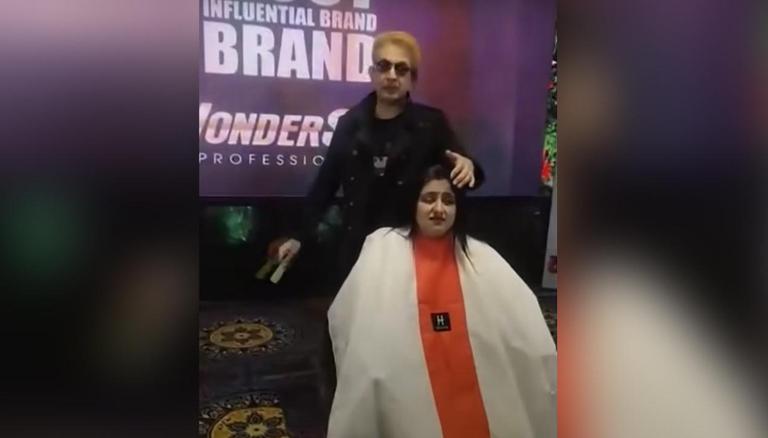 
Days after prominent hairstylist Jawed Habib faced severe backlash for spitting on a woman's head while styling her hair at a seminar in Muzaffarnagar, another video of the disgusting act has appeared on social media.

In the latest video, shared on January 6, Jawed Habib is seen parting a young girl's hair and spitting over it as he continues to comb. The girls present at the seminar are seen screaming in shock while Habib acts comically. The outrageous video comes despite a case being registered against the hairdresser for mistreating the female customer.

The incident is said to be of a training seminar that took place in Muzaffarnagar where Habib was seen spitting on the woman's head in front of a crowd, after saying that "her hair is dry."

Pooja Gupta, who attended his seminar earlier this week, filed a complaint against the hairstylist for spitting on her head and humiliating her in public. Pooja told reporters that when she asked questions in the seminar, Habib answered by bragging about running '900 salons' whereas she runs only one. To humiliate her further, Pooja said Habib called her on stage for demonstration and spit on her hair.

The hairstylist faced severe criticism from netizens who were disgusted by the shameful act. Following the backlash, Habib issued an apology by posting a video of himself on social media with the caption, "Sorry...I mean it."

Justifying his spitting, Habib said, "Some seminars are too long, and we need to do such things to make sessions hilarious. If somebody is still hurt, please accept my apologies."

The National Commission for Women (NCW) took serious cognisance of this incident and directed the DGP Uttar Pradesh to investigate the veracity of the viral video and take appropriate action. Sharma added that the action taken must be apprised to the Commission at the earliest.

Confirming the development, Muzaffarnagar Police said that a case has been registered against the accused under relevant sections at Mansurpur police station on the complaint filed. They also said that they are proceeding with the case as per procedures.

In addition, the NCW has summoned the celebrity hairstylist on January 11 to seek an explanation for humiliating a woman during the training seminar.  Sharma stated that she wants to hear from the hairstylist as to 'why he did such a thing.'