Delhi Chief Minister Arvind Kejriwal met Olympic medallist Bajrang Punia on Tuesday at his residence and said he is an inspiration to young people. 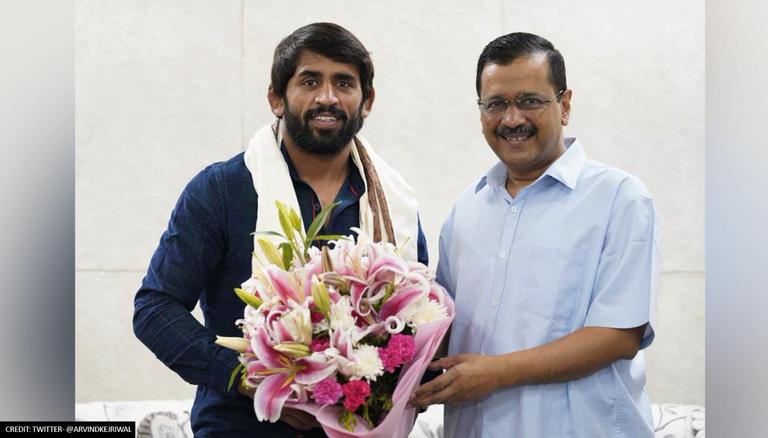 Had the pleasure to meet Olympic bronze medalist Bajrang Punia today at my residence.

Bajrang has brought glory to India and made us all proud. You are an inspiration to millions of youth. pic.twitter.com/IEkrT7YPxD

He noted, "Bajrang has brought glory to India and made us all proud. You are an inspiration to millions of youth[sic]."

India won seven medals at the Tokyo Olympics, its best-ever performance in Olympic history. The achievement in the 2020 Games exceeded the country's tally of six medals at the 2012 London Games. Bajrang Punia won a bronze medal in the 65kg Men's Wrestling event at the Olympics, bringing India's total medal count to seven. Punia, a Haryana freestyle wrestler, won bronze in his Olympic debut this year after defeating Kazakhstan's Daulet Niyazbekov.

Meanwhile, Bajrang Punia of India will be unable to compete in the forthcoming World Wrestling Championships after being advised of a six-week rehabilitation at the Kokilaben Dhirubhai Ambani Hospital to address a ligament tear in his right knee. The Wrestling World Championships are set to take place from October 2-10 in Oslo, Norway, and Bajrang Punia was expected to compete. However, an MRI exam performed on the wrestler to determine the degree of the injury he sustained in Russia showed a ligament tear, ruling the athlete out of the World Championships.

Bajrang Punia led the Indian Olympic Contingent in the closing ceremony of the Tokyo Olympics 2020, carrying Indian tricolour. In the Men's 65kg category, he won his first Olympic bronze medal after defeating Kazakhstan's Daulet Niyazbekov in the third-place match. Wrestler Ravi Dahiya won silver for India in the Men's 57kg category, while Deepak Punia lost out on an Olympic medal after finishing third in the Men's 86kg event. India, on the other hand, returned from Tokyo with their best Olympic results ever. India won seven medals in their campaign, including gold in the Men's Javelin Throw by Neeraj Chopra.