'Sukran ki Ardaas' was offered at Gurudwara Arjun Dev Ji in New Delhi to celebrate the return of the three 'Swaroops' of the Sikh Holy Book, Guru Granth Sahib. 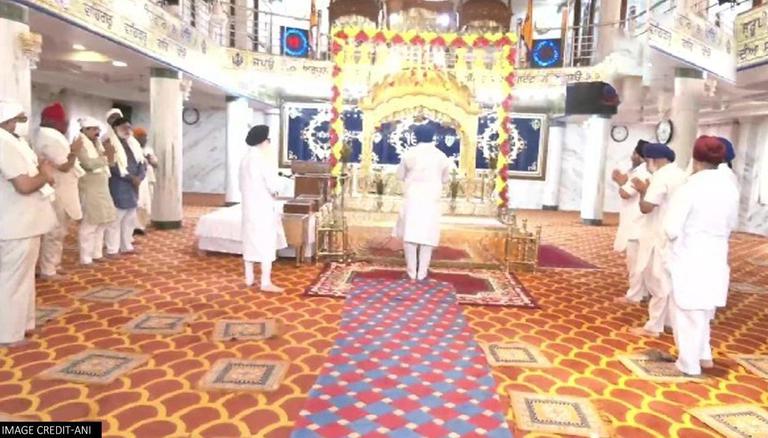 
'Sukran ki Ardaas' was offered at Gurudwara Arjun Dev Ji in New Mahavir Nagar in New Delhi on Friday. The prayers were offered to celebrate the return of the three 'Swaroops' of the Sikh Holy book Shri Guru Granth Sahib, which were brought back from Afghanistan after the recent shift in power. Members of the Sikh community and the devotees who visited the Gurudwara thanked the Prime Minister, his government and the Indian Air Force for safely procuring and returning the holy books. The three 'Swaroops' of Shri Guru Granth Sahib were flown from Kabul to Delhi via an Air India flight along with 78 evacuees from Afghanistan. The contingent was welcomed at the New Delhi airport by Union Minister Hardeep Singh Puri.

Similar celebrations in other parts of the country

Not only in Delhi, 'Sukran ki Ardaas' was offered at the Gurudwaras of Jammu, Bhopal and Shimla as well. Members of the Sikh community of Bhopal heaped praise upon Prime Minister Narendra Modi and Union Minister Hardeep Singh Puri after their successful efforts in procuring the three 'Swaroops' of Guru Granth Sahib from Afghanistan. The devotees also thanked the Government of India for taking the initiative of the safe return of Sikh and Hindu families after the Taliban took control of the country. A Gurudwara member spoke about the situation while speaking to the news agency ANI, "The entire Sikh community thanks Prime Minister Narendra Modi and Union Minister Hardeep Singh Puri for the safe return of Sih and Hindu families. Today, a 'Sukran ki Ardaas' was held at Gurudwara Singh Sabha in Arera Colony, Bhopal to pray for the safe return of the remaining Sikh and Hindu families who are still in Afghanistan.”

He had tweeted on Monday that the three Sri Guru Granth Sahib were being escorted to the IAF aircraft at the Kabul Airport. Although he mentioned 46 Afghan Hindus and Sikhs evacuees, the eventual number of stranded Indian nationals who returned from the flight was 78. Any further evacuation process might take time after the suicide bombings at the Kabul Airport last evening. The Ministry of External Affairs put out a statement saying, "India strongly condemns the bomb blasts in Kabul. We extend our heartfelt condolences to the families of victims of this terrorist attack. Today’s attacks reinforce the need for the world to stand unitedly against terrorism & all those who provide sanctuaries to terrorists."