Sources say that the decision to name colleges after Savarkar, Sushma Swaraj was taken in the executive council meeting of the Delhi University held recently. 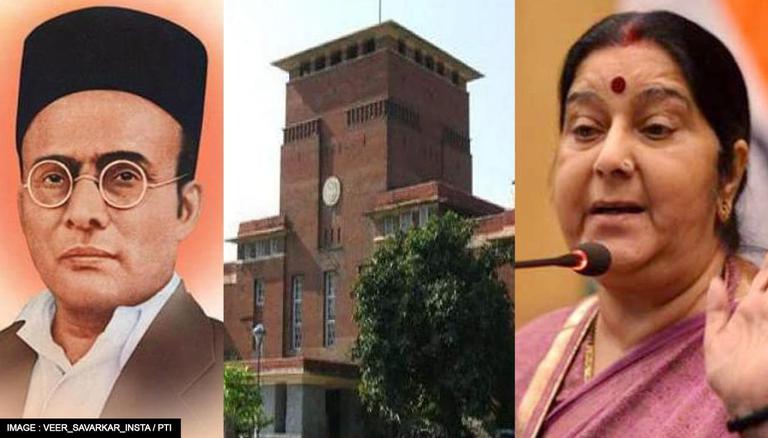 
In a key development, the University of Delhi, according to sources, has decided to name its upcoming colleges after Veer Savarkar and the late BJP leader Sushma Swaraj. Sources say that the decision was taken in the executive council meeting of the university held recently.

In the month of August, the academic council of the university held a meeting and took the decision to name new colleges/centers after Sushma Swaraj, Swami Vivekananda, Veer Savarkar, and Sardar Patel. The council also suggested names of Atal Bihari Vajpayee, Savitri Bai Phule, Arun Jaitley, Choudhary Brahm Prakash, and CD Deshmukh. The council had authorised the Vice-Chancellor to finalize the names.

Back in August, the National Students Union of India’s Delhi president Kunal Sehrawat has condemned the decision. Taking to his official Twitter handle, Kunal Sehrawat had said, 'If you have decided to name the college after Savarkar, then we are also going to buy a bottle of Soot.'As per the NSUI Delhi's President, if a signboard with Savarkar’s name is installed outside the proposed college, then it will be 'blackened'.

Meanwhile, despite the Delhi Disaster Management Authority (DDMA) having allowed the opening of schools, colleges, and other educational institutions, the Delhi University has not taken an official call yet on complete reopening. Various students organizations have been protesting, demanding the reopening of the campus. While the All India Students’ Association (AISA) has been on a hunger strike outside the arts faculty building for over five days, the Akhil Bharatiya Vidyarthi Parishad (ABVP) has also called for a protest across all college campuses on Friday.