'Delight To See': Govt Employee Captures Snowclad Himalayas From His Home In Saharanpur

“Saharanpur people are lucky,” said several internet users after a government employee captured the snow-clad Himalayas from his home in Uttar Pradesh. 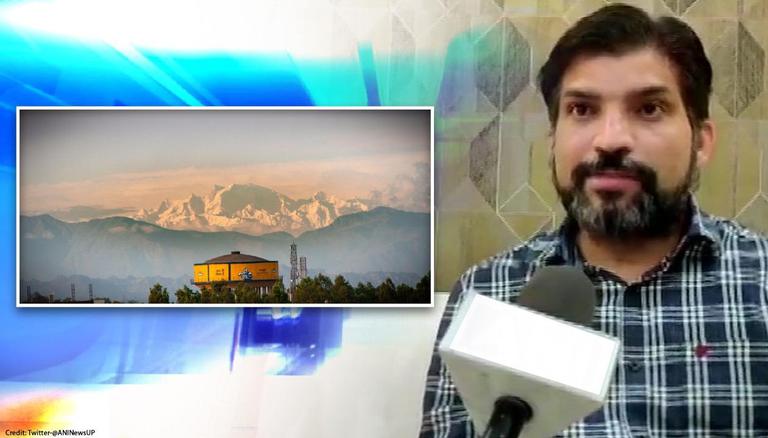 
“Saharanpur people are lucky,” said several internet users after images of the snow-clad Himalayas captured by a government employee from his home in Saharanpur were posted by news agency ANI. Dushyant Kumar, a government employee, as well as an amateur photographer from the city in Uttar Pradesh, said that he captured the Himalayas as seen from his home on May 20. He credited low pollution levels and continuous rainfall for the past few days, which led to the clear vision of the Asian mountain range that has the world’s highest peak.

“Around sunset time, the Gangotri, Yamunotri and Banderpunch range of Himalayas were illuminated and were visible clearly. Last year too this range of mountains was visible from here in April month. It was a delight to see the Himalayas from Saharanpur,” Kumar told ANI.

Dushyant Kumar, a govt employee & an amateur photographer from Saharanpur says, he has clicked pictures of the Himalayas seen from Saharanpur on May 20, due to low pollution levels following continuous rainfall for the past few days pic.twitter.com/bbN48ifCX6

Soon after the images were posted on the internet, people across the nation either said how they can also view the Himalayas or simply expressed their sadness for living in some other city. Another internet users posted a video from Roorkee where he can spot the mountains in Masoorie and Dehradoon “clearly.” Another user said, “Snow capped peaks of Dhaulagiri range is visible from my place but mere pass itne achhe cameras nhi hai.” Another Twitter user said, “Saharanpur people are lucky that they can see Himalayas from their home... I like it.. kaash saharanpur waalon ka heart bhi Himalayas ki tareh bda hota.”

See.. I have taken yesterday from Roorkee. Masoories and Dehradun Pahad are clearly visible from my Plant Location Roorkee Dehradun Highway. pic.twitter.com/ePkcomfiEd

Saharanpur ppl are lucky that they can see Himalayas from their home... i like it.. kaash saharanpur waalon ka heart bhi Himalayas ki tareh bda hota ..

This is really Beautifull,

Snow capped Himalayas spotted from Saharanpur after a thunderstorm

Last year in May 2020, Saharanpur residents claimed that they were able to witness the majestic sight of the Himalayas, yet again. Having a distance of more than 240km, the city in UP had first captured the sight of slow clad mountains last week, but after a thunderstorm over the weekend, pictures again emerged on May 10, 2020. With the improved Air Quality Index (AQI), the view of Gangotri and Yamunotri from Saharanpur was deemed “awesome” by the netizens.

Not only did internet users laud the ‘healing of nature’ but also appreciated the photographer of these images. According to Indian Forester Ramesh Pandey, the images have been clicked by Dr Vivek Banerjee who is a paediatrician in the city. Once these images were shared, people across the state posted their version of the ‘breathtaking’ view from the balconies of their houses. Many united to agree that the view of mountains is “truly captivating” and one of the internet users also hoped that “humans will now learn”.

Gangotri and Yamunotri visible from Saharanpur UP after rain and thunderstorm. What a Awesome view. Distance between Saharanpur to yamunotri is 248 km. #lockdowneffect #COVIDIOTS #coronavirus #COVID #Weather pic.twitter.com/ZzSkPEkxzR

READ | Priyanka to attend 'kisan panchayat' in Saharanpur on Wednesday: UP Congress
First Published: 21st May, 2021 13:14 IST
SUBSCRIBE TO US