Uttar Pradesh Minister Shrikanth Sharma was at the Agra airport to receive Denmark Prime Minister Mette Frederiksen, whos in on a three-day visit to India 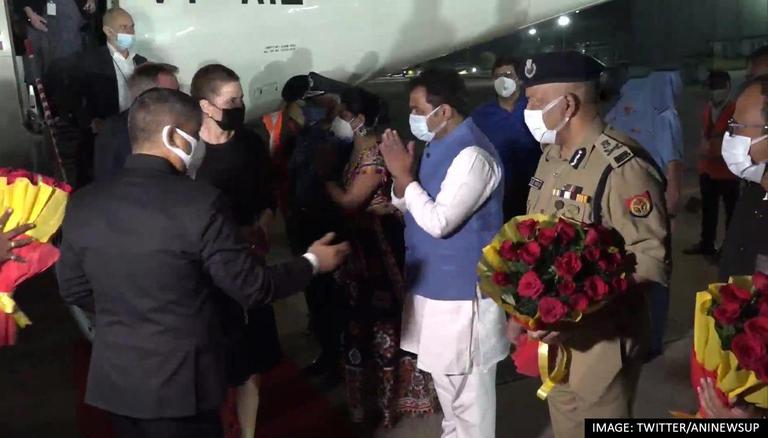 
Denmark Prime Minister Mette Frederiksen, who is on a three-day visit to India, arrived at the Agra airport on Saturday night. Following this, she is expected to visit the Taj Mahal and Agra Fort on Sunday, October 10, which might be closed for the general public for two hours. While Uttar Pradesh Minister Shrikanth Sharma was at the airport to welcome the Danish counterpart.

Earlier on Saturday, The Danish PM was accorded a ceremonial reception at Rashtrapati Bhavan followed by wreath-laying at Mahatma Gandhi’s samadhi at Rajghat. Prime Minister Narendra Modi and his Danish counterpart held a bilateral meeting over various issues, including India-Denmark Green Strategic Partnership.

Addressing a joint press meet with PM Modi In Delhi, Danish PM Mette Frederiksen said, "You (PM Modi) are an inspiration for the rest of the world as you have set some very ambitious targets when it comes to clean water for over 1mn households and renewable energy. I'm proud that you have accepted my invitation to visit Denmark". She then invited PM Modi to participate in the second Nordic-India summit that will be organized in Copenhagen.

Further stressing the role of being a democratic country in the world, she stated, "We are two democratic nations that believe in an international system based on rules. Cooperation between India and Denmark is a great example of how green growth and green transition can go hand in hand".

India and Denmark signed four agreements signed including the memorandum of understanding (MOU) between the Council of Scientific & Industrial Research- National Geophysical Research Institute, Hyderabad, Aarhus University, Denmark, and Geological Survey of Denmark and Greenland on mapping of groundwater resources and aquifers.

The Traditional Knowledge Digital Library Access Agreement between the Council of Scientific & Industrial Research and the Danish Patent and Trademark Office was the second agreement signed after the bilateral talks.

The third MoU was signed to establish a Centre of Excellence towards natural refrigerants for tropical climates with potential applications between the Indian Institute of Science, Bengaluru, and Danfoss Industries Private Limited.