In a major breakthrough, DK Shivakumar's daughter Aishwarya has been summoned by the Enforcement Directorate (ED) in connection with the money laundering case

In a major breakthrough, DK Shivakumar's daughter Aishwarya has been summoned by the Enforcement Directorate (ED) in connection with the money laundering case agianst him. The probe agency is scheduled to interrogate the Congress leader's daughter about the case. Additionally, it was also reported that aides of Shivakumar are being raided as a part of investigation in the case. The ED claims that a specific property worth 76 crore is on the name of DK Shivakumar's daughter. The ED will further question his daughter regarding the case. Below is the document by ED on the same case: 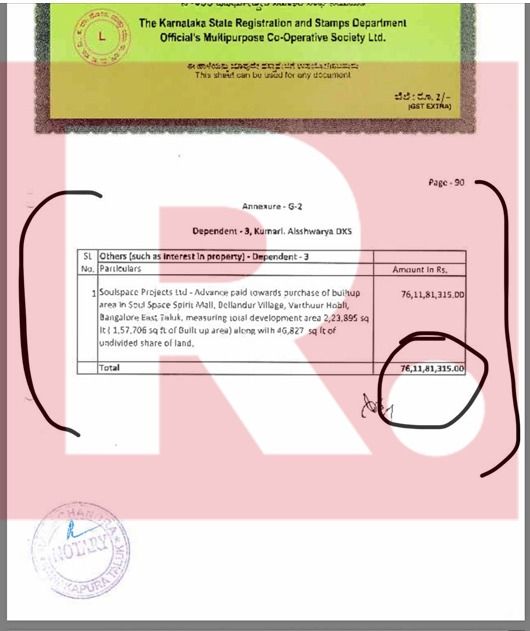 DK Shivakumar in custody till September 13

DK Shivakumar is currently under ED custody till September 13, in connection with an alleged money laundering case, his bail application will be heard on the same day as well. A Delhi court on September 4 sent Congress leader to ED custody. Earlier, while seeking remand, ED had sought Shivakumar's custody asserting that he gave evasive replies and remained non-cooperative during the investigation.

According to the chargesheet, Shivakumar refused to a provide details to some of the questions asked to him by the ED officers, with his responses limited to, "will get back to you."

When questioned over the details of bank accounts held in his name or in the name of his family details, the Congress leader said that he does not remember and that the details would be submitted to the ED. A similar response was recieved during the cross questioning when Shivakumar was asked about the details regarding movable and immovable properties held in his name or in his family member's name, and whether if any cash, gold jewellery or bullion belonging to him or his family was kept at any other place.

Shivakumar will now be put through a custodial interrogation by the Enforcement Directorate (ED) in a money laundering base based on an Income Tax FIR for Rs. 13 crore unaccounted case allegedly found in an apartment that belonged to the Congress leader. The agencies are known to be looking into DK Shivakumar's connections. According to reports, the entire nexus allegedly run by the Congress leader included trips specifically to Singapore. The agencies have also acquired documents during the search operation of Shivakumar's financial assistance, N Chandrashekhar on August 2, 2017.

A special court in Delhi refused to increase the time allotted to Karnataka Congress leader DK Shivakumar, to meet his family and lawyers, on Monday, September 9. DK Shivakumar is currently under Enforcement Directorate (ED) custody till September 13. The Congress leader, through an application, sought to extend visitation period from 30 minutes to 1 hour, however, the court turned his request down.