DRDO's 2-DG Gets DCGI Approval; Here's All You Need To Know About The Anti-COVID-19 Drug

The anti-COVID-19 therapeutic has been developed by DRDO scientists at the Institute of Nuclear Medicine and Allied Sciences (INMAS). 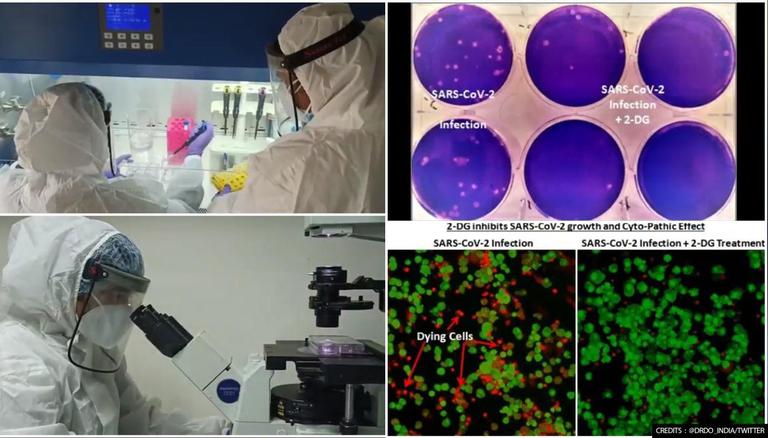 
The Drugs Controller General of India (DCGI), a body responsible for approval of licences of drugs in India, has approved the anti-COVID-19 therapeutic developed by Defence Ministry's  Defence Research and Development Organisation (DRDO). The drug, which received the emergency use authorisation on May 1, is called 2-deoxy-D-glucose (2-DG). According to a press release by the Defence Ministry, clinical trials of 2-DG have demonstrated that it helps in faster recovery of patients severely ill with the COVID-19 disease. The drug helps in faster recovery of hospitalised patients by reducing their dependency on oxygen, which can come in handy in these trying times when the country is suffering from an acute shortage of oxygen concentrators.

An anti-COVID-19 therapeutic application of the drug 2-deoxy-D-glucose (2-DG) has been developed by INMAS, a lab of DRDO, in collaboration with Dr Reddy’s Laboratories, Hyderabad. The drug will help in faster recovery of Covid-19 patients. https://t.co/HBKdAnZCCP pic.twitter.com/8D6TDdcoI7

Know everything about DRDO's 2-DG drug

The anti-COVID-19 therapeutic has been developed by DRDO scientists at the Institute of Nuclear Medicine and Allied Sciences (INMAS). The drug has been developed in collaboration between DRDO and Dr Reddy’s Laboratories (DRL) in Hyderabad. The drug was ready for clinical trials in April last year after DRDO and INMAS scientists conducted experiments inside the lab and found 2-DG to be safe and effective against the SARS-CoV-2 virus.

Based on the results from the lab experiment, DCGI permitted DRDO to conduct Phase-II clinical trials of the drug. The trials showed 2-DG was effective against the COVID-19 virus and demonstrated signs of recovery in patients. Following the successful Phase-II trials between May and October 2020, the drug was tested again in Phase-IIa and Phase-IIb trials, which were conducted at six and 11 hospitals respectively. Overall the Phase-II trials were conducted on 110 patients.

The DRDO received approval to conduct Phase-III trials of the drug by DCGI in November 2020. The Phase-II trials were conducted between December 2020-March 2021 at 27 hospitals across India, including in Delhi, Uttar Pradesh, West Bengal, Maharashtra, Gujarat, Tamil Nadu, Telangana, Karnataka, etc. The Phase-III trials were conducted on 220 patients. The results showed faster recovery in patients who took the drug as compared to those who followed just the Standard of Care (SoC). The use of oxygen in patients who took 2-DG declined significantly.

READ | As DRDO sets up facilities across nation; officer speaks to Republic TV on COVID efforts

How to take the drug?

2-DG comes in powder form, which the infected patients can take orally by mixing up the drug in water. The drug, which is akin to a glucose mix, is easy to manufacture and store, which makes it critical at a time when many people are dying because of the lack of oxygen infrastructure for supply and transportation in India.

"It accumulates in the virus-infected cells and prevents virus growth by stopping viral synthesis and energy production. Its selective accumulation in virally infected cells makes this drug unique. In the ongoing second COVID-19 wave, a large number of patients are facing severe oxygen dependency and need hospitalisation. The drug is expected to save precious lives due to the mechanism of operation of the drug in infected cells. This also reduces the hospital stay of COVID-19 patients," MoD said in a release.