Elephant Strays From Herd And Reaches Durga Puja Pandal, About 24 Injured In Stampede

The tusker, which had trampled to death four persons in Hazaribagh district during the past 30 hours, had strayed from a herd of 22 elephants. 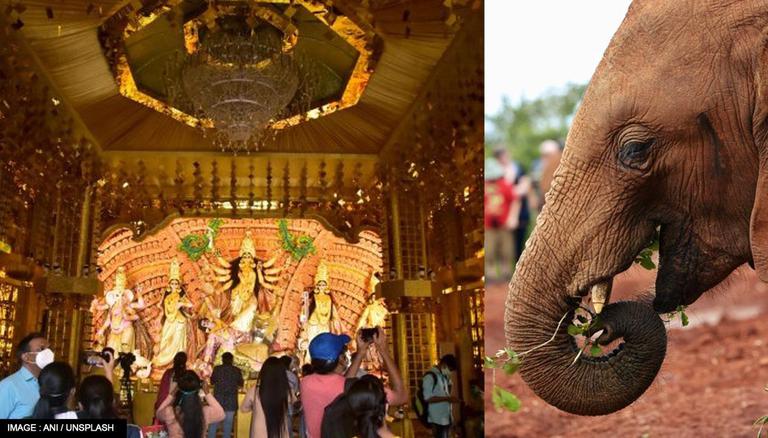 
A tusker strayed away from its herd and entered a Durga Puja marquee at Daroo in Jharkhand creating panic among devotees, about 24 of whom were injured in the stampede that took place subsequently, a forest official in Jharkhand said on Wednesday.

The incident took place during sandhya aarti (evening prayer) at around 8.30 pm in the marquee at Daroo chowk in Hazaribag district on the second day of the festival on Tuesday, the official said.

The tusker, which had trampled to death four persons in Hazaribagh district during the past 30 hours, had strayed from a herd of 22 elephants and reached the puja pandal, divisional forest officer of Hazaribag West division, R N Mishra told PTI.

The elephant's presence created panic among about 2,000 residents and villagers creating a stampede as they ran helter skelter for safety, he said.

A member of the Daroo puja committee, Ranjit Sinha said that on reaching the pandal, the wild elephant appeared anxious and ran towards Bharajo village before snatching a man and his son from the ground and throwing them down.

The two were rushed to a hospital at Hazaribagh where they are undergoing treatment.

The tusker while retreating also destroyed about six houses of the villagers and also damaged the boundary walls of nearby buildings, Mishra said.

Daroo forest ranger Vijay Singh said that the forest officials had information that a single elephant, which had caused panic at Katkamdag forest range and Demotand on NH 33, has entered Daroo from Dighwar forest and was present on NH 100. The department had tried to divert its movement.

Daroo is located about 25 km from the district headquarters of Hazaribag on NH 100 on Hazaribag-Bagodar Road.

Mishra said, We have alerted all the foresters about this particular elephant which had created havoc within a range of 30 km of Hazaribag town and killed four persons, including two women and a member of Birhor tribe".

He said the forest department has formed several teams of experts and directed them to study the behavior of the rogue elephant.

Hazaribag deputy commissioner Aditya Kumar Anand said he has directed the district forest department officials concerned to find out some ways and means to contain this menace.

He also directed them to divert elephants to their natural corridor.