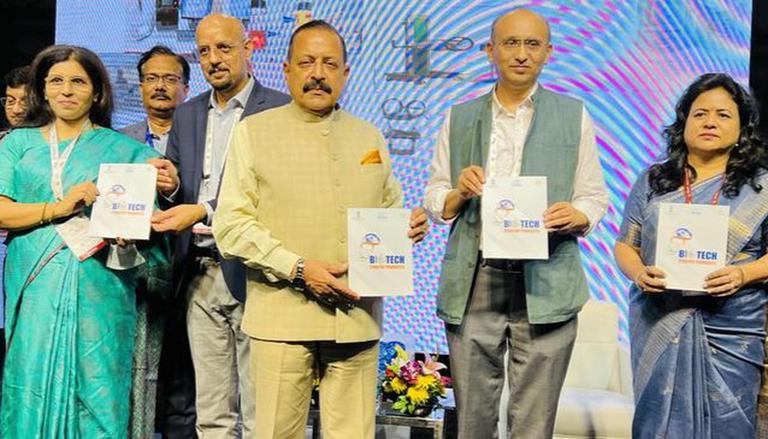 
Addressing the Biotech Startup Expo, Union Minister of Science and Technology Jitendra Singh said that India is now moving from women-specific projects to women-led projects, and also added that the exponential rise of the Indian Biotech sector from $70 bn to $150 in the next four years would not be possible without the active contribution of women.

After releasing a book based on "Compendium of 75 Women Biotech Entrepreneurs" at the Biotech Start-up Expo that was held at Pragati Maidan in Delhi, Union Minister Jitendra Singh said, "India is moving from women-specific to women-led projects. Today, India is looking at a growth of the Biotech sector from USD 70 billion to USD 150 billion in the next four years and this cannot be accomplished without the active participation of women."

In the past 8 years,the number of female-led #StartUps and female-led Biotech companies has witnessed an exponential rise and this can be seen heralding in India an era of women-led empowerment, rather than just women empowerment.#BiotechStartUpExpo #8YearsOfReforms pic.twitter.com/P81OvDlBBX

'From women-empowerment to women-led empowerment'

The number of Biotech companies headed by women have seen a massive rise in the past eight years and this can be aptly described as not just women empowerment but women-led empowerment, Union Minister for Science and Technology Dr Singh said. The Minister further said that women in India have performed commendably well in the areas of Space, Nuclear Science, Drone and Nano Technology. Dr Jitendra Singh further stated that among the many illustrious scientifc projects, the Gaganyaan that is to be launched in 2023 is also anchored by women scientists. Dr. Singh further added that women innovators in the country are the key pillars of Prime Minister Narendra Modi's new India.

Sharing information on the employment-related opportunities created by the Department of Biotechnology, Union Minister Jitendra Singh said that special schemes have been announced to attract women scientists and to provide employment options to unemployed women scientists. The Minister apprised, "Market conditions, access to varied business opportunities, and female entrepreneurs' readiness to jump into the world of business ownership create a winning trifecta."

The support provided by the Prime Minister Narendra Modi-led government has resulted in the growth of Biotech startups from 50 to over 5,000 in the last eight years and it is expected to grow to a towering 10,000 by 2025, said the Union Minister. Dr. Singh added that India is ranked 10th globally in the Biotech sector, third in Asia Pacific and is the largest vaccine manufacturer in the world.

The Minister further said that Biotechnology is the underlining technology that runs Bioeconomy, which is considered as the sunrise sector.