Jagan Mohan Reddy-led Andhra Pradesh cabinet gave its assent to the bill on Wednesday and the same will be tabled in the Andhra assembly session that is currently underway. This comes just days after the Andhra Pradesh CM had lauded the action of his Telangana counterpart and also the police. Jagan Reddy had said, "If a hero in a movie kills someone in an encounter, we all applaud. If a courageous person does that in real life, they will be questioned on human rights. Hats off to KCR and Telangana police officers." 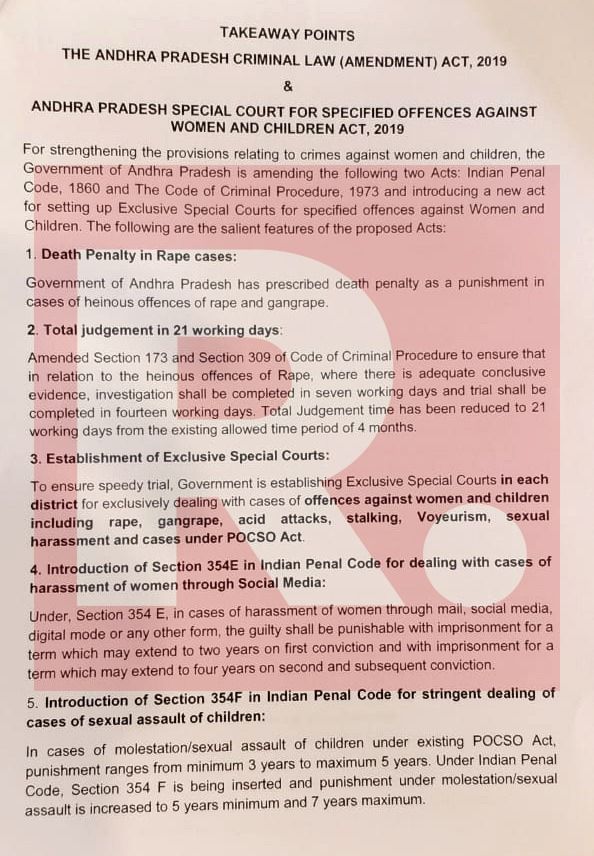 There are five salient features in the bill copy that Republic is in possession of, which aims to create special provisions to ensure safety for women and children against crimes like rape, acid attack, and stalking.

1.The death penalty in rape cases

Has prescribed the death penalty as a punishment in cases of heinous offences of rape and gangrape.

4.Introduction of section 354EIndian Penal Code for dealing with cases of harassment of women through Social Media

In cases of harassment of women through the mail, social media, digital mode or any other form, the guilty shall be punishable with imprisonment for a term which may extend to two years.

5.Introduction of Section 354F in Indian Penal Code for stringent dealing of cases of sexual assault of children

A section of the society that has been frowning upon the encounter in Hyderabad had called for the speedy delivery of justice against perpetrators of heinous crime against women and children so as to ensure that the death penalty is through the legal justice system.