Opposing the Farm Bills and the Centre for not repealing it, the Farmers' Parliament (Kisan Sansad) on Friday, passed a 'no-confidence' motion against govt 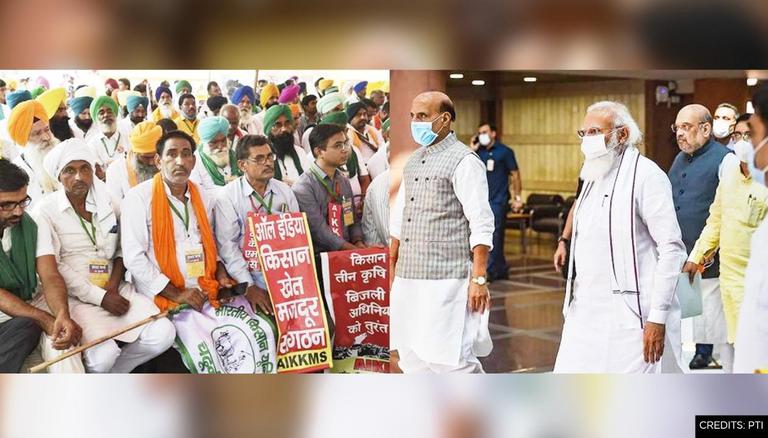 
Opposing the Farm Bills and the Centre for not repealing it, the Farmers' Parliament (Kisan Sansad) on Friday, passed a 'no-confidence' motion against the government. Moreover, the Kisan Sansad also passed seven resolutions annulling the Farm Laws and other agriculture-related laws passed by Parliament. Around 200 farmers are holding 'Kisan Sansad' at Jantar Mantar, mere 150 metres away from Parliament which is stuck in a logjam.

On Friday, leaders of Opposition led by Rahul Gandhi barring TMC, BSP and AAP joined the farmers protesting against the agrarian laws at Jantar Mantar to express their solidarity.  After assembling at Gate no.1 of Parliament, Congress leaders including Rahul Gandhi, Ambika Soni, Gaurav Gogoi, Shiv Sena's Sanjay Raut, RJD's Manoj Jha, DMK's T Siva and others boarded a bus near the Rakabganj Gurudwara. During their journey to Jantar Mantar, the opposition leaders shouted slogans against the farm laws and snooping.

Addressing the media at Jantar Mantar, Rahul Gandhi remarked, "Today, the opposition parties extended full support to the farmers' issues and the demand to repeal the black laws. We want to talk about Pegasus in the Parliament but they are not letting it happen. Narendra Modi has gone inside every Indian's phone. We have come here to render full support to all farmers of India".

Just 150 metres away from Parliament at Jantar Mantar, 200 farmers have been protesting against the Farm Bills, demanding a total repeal. As per an agreement between the farmers and the Delhi police, 200 protestors from Sanyukt Kisan Morcha and 6 from Kisan Mazdoor Sangharsh Committee have been protesting peacefully from 11 AM to 5 PM daily and will last from July 22 to August 13. The farmers have passed a 'People's Whip' urging all Opposition MPs to raise the farmers' protest in the Parliament. Barbed wires, wall barricades, and heightened security reappeared at Delhi's Singhu, Tikri and Ghazipur borders ahead of 'Kisan Sansad'. Currently, farmers' protest has thinned out at Delhi's borders, but farmers refuse to call it off re-iterating 'No Ghar Wapsi till Law Wapsi'. Talks between Centre and farmers stalled after 13 rounds, before the January 26 violence at Red Fort.