In a worldwide exclusive, Republic TV has uncovered the 'Break India' movement of the 'front for Khalistani groups', whose members have been caught on camera accepting working hand in hand with China, Pakistan and Maoists to wreck havoc in the country

In a worldwide exclusive, Republic TV has uncovered the 'Break India' movement of the front for Khalistani groups, whose members have been caught on camera accepting working hand in hand with China, Pakistan and Maoists to wreak havoc in the country.

A sting operation conducted by Republic TV's Shawan Sen has brought out some shocking facts, which has gone onto reveal how breaking India is at the core for these Khalistan groups.

'We do want India to break up'

Shamsher Singh of the National Sikh Youth Federation, a front for Khalistani groups, was caught on tape making stunning revelations. In the video, he is seen calling for wanting to 'break up India' by giving a free hand to Naxals, Maoists, and others who have a similar ideology. 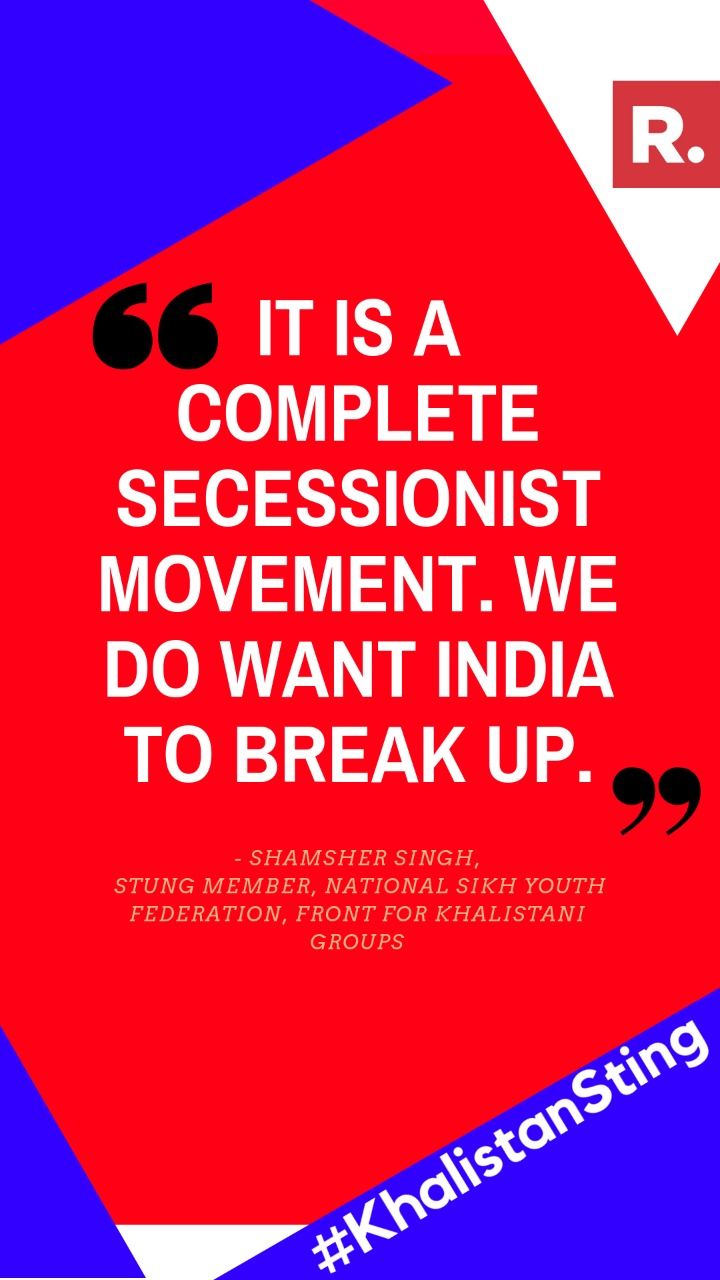 'Enemy's enemy is our friend'

Almost similar words were used by Gurcharan Singh, member of the once banned Dal Khalsa. He mentioned that they have formed an alliance with other groups within India. "Change in policy would mean that rather than doing everything ourselves we let others do it. Finance them, fund them. The kashmiris, there's Maoists. Everybody. Our people have link in every single state in India. Every single (inaudible). We are directly funding every terror activity in India first hand...From what we know so far," he added.

His explanation for this break India alliance is equally sinister. He says “The enemy of your enemy is your friend. That is the simple thing. And secondly, when the union is smashed into small parts we will need coalition of such groups.” 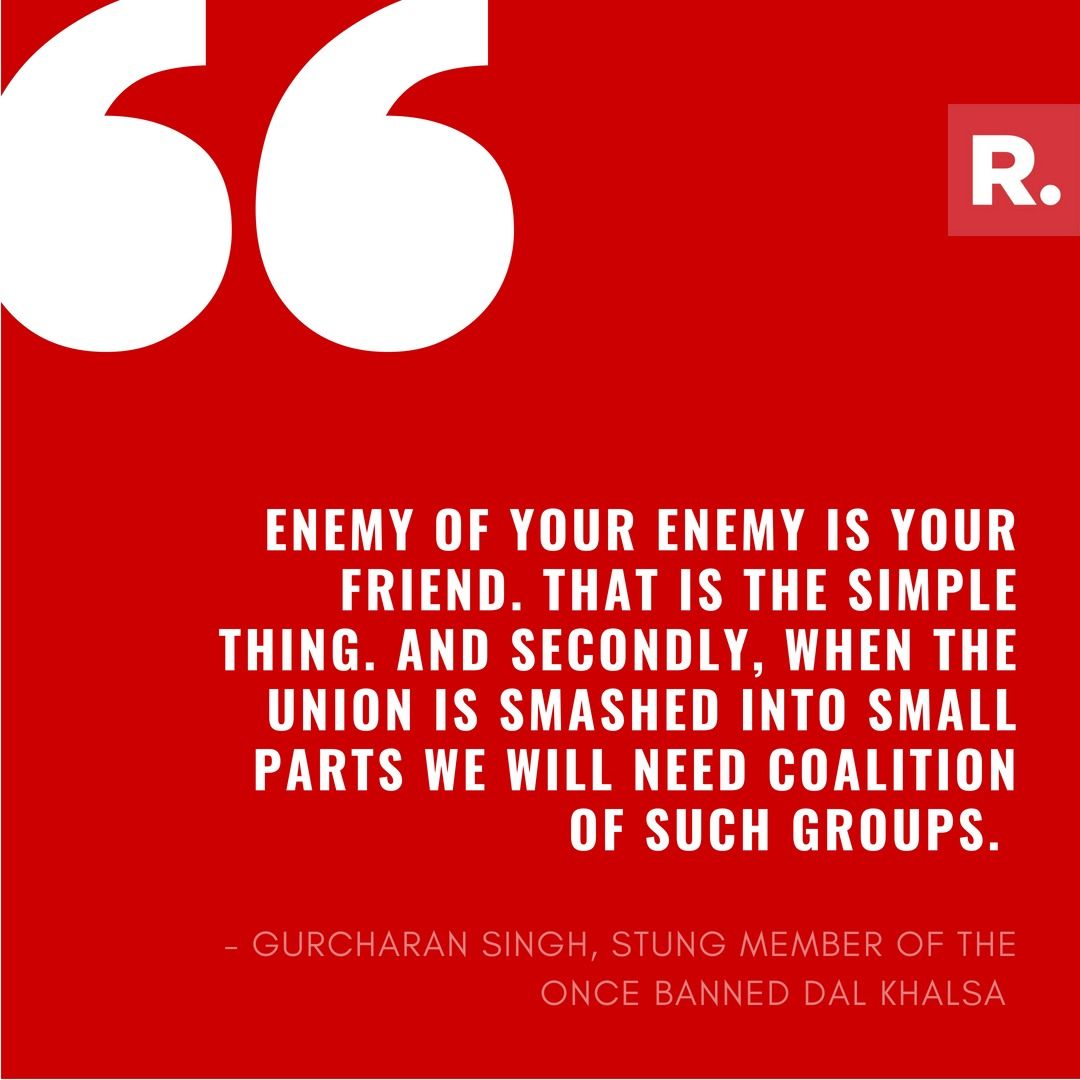 Gurcharan Singh was also caught on tape claiming that he and his group provided complete support, including in form of funding, to the party during the Punjab elections in 2017.

"Look at Punjab. AAP won the elections. They won 95 seats. We were on the ground. Campaigning for the party. We funded the party to see what a campaign makes a difference. And it does make a difference. People voted for AAP. They did not win because of the EVM," Gurcharan Singh said.

READ: Stung On Camera: Member Of The Forces Of Khalistani Group Claims Support And Funding Given To AAP During Punjab Elections

When the reporter informed him that AAP had actually lost the elections, he ended up blaming the party. "Aam Aadmi Party is nothing. Its a vessel. It means nothing, it stands for nothing," he added. 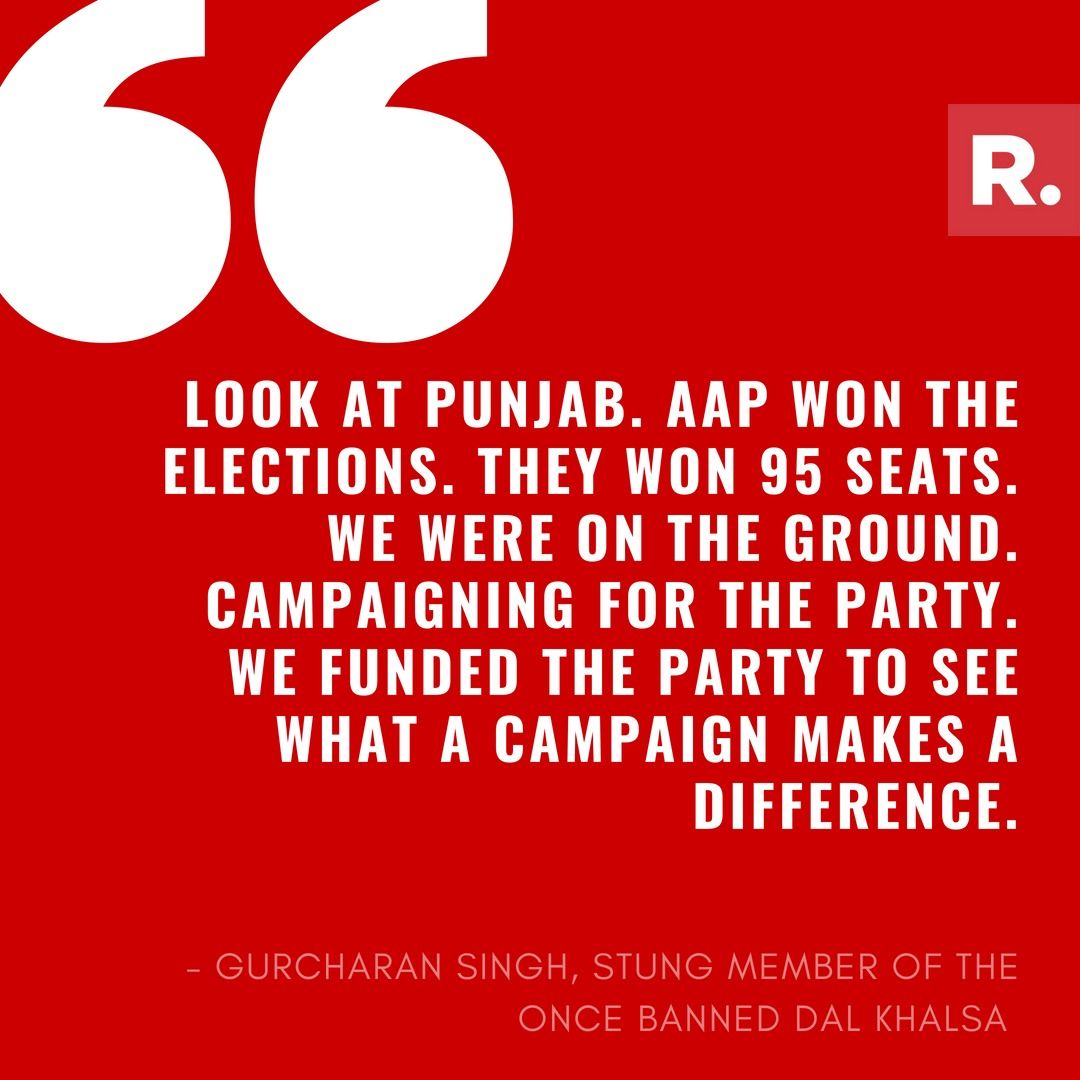 'If China takes over Sikkim then our job is done'

Heaping praise on China, the country which has been building tension in Doklam, Gurcharan broke down the plan of action and the idea behind seeking Chinese support. He says,

"For example, China, our office is in China in Beijing. The whole political idea of those offices in Beijing is to keep going to the communist party and tell them you can do what you want. You want to take over Sikkim? You can take over Sikkim." He adds "the main idea is to sell this idea to them that you are welcome. We will justify you internationally."

READ: 'If China Takes Over Sikkim, Then Our Job Is Done', Says Stung Member Of The Front For Khalistani Group 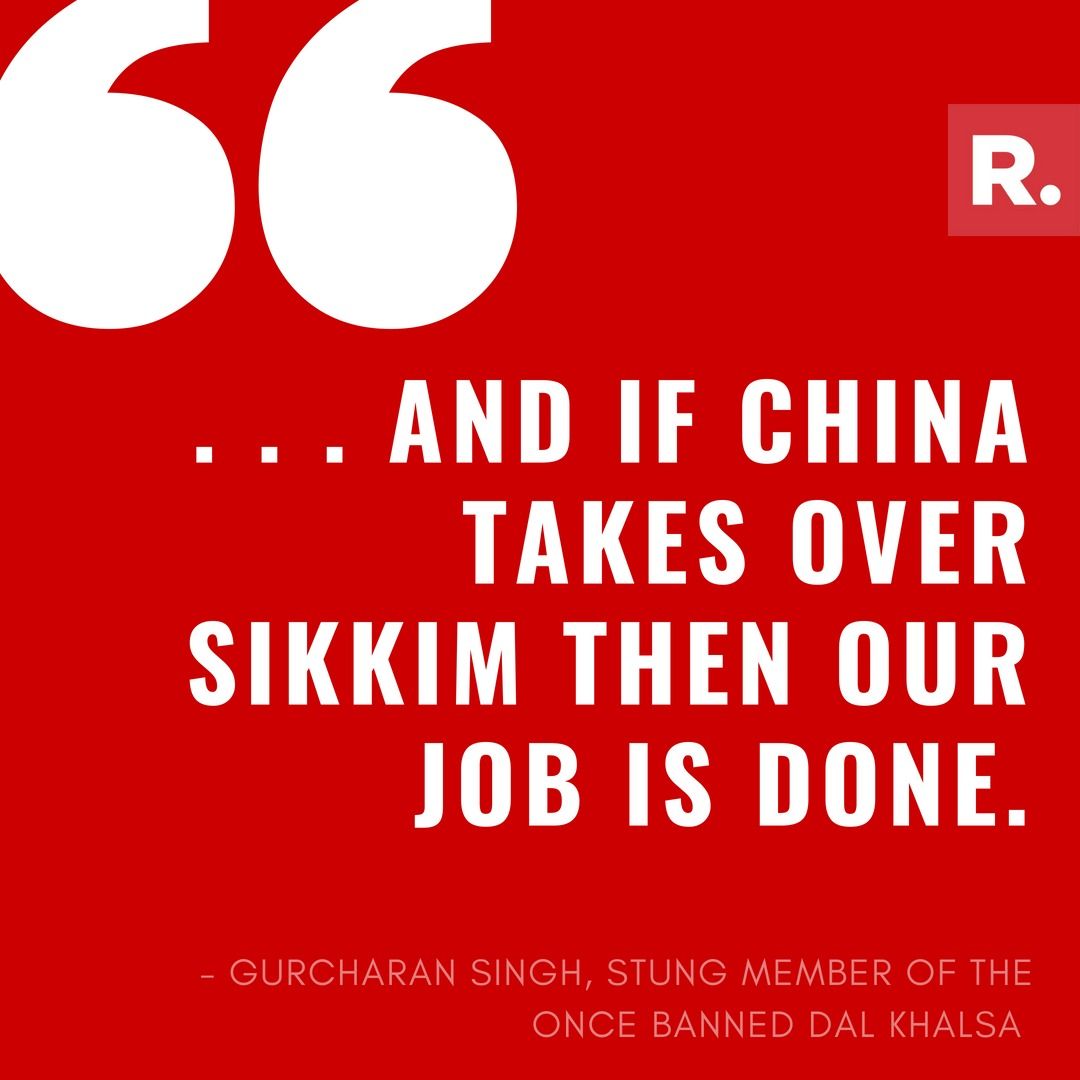 He also asserts that his group's task will be done when Sikkim is captured by China and declares “We will be out on the streets saying China is good and India is bad in every other country outside India. And if China takes over Sikkim then our job is done.”

‘Yes, Khalistan was involved in the killings of the RSS leaders’

Shamsher Singh claimed on tape that  banned terror outfit Khalistan Liberation Force (KLF) has been targeting the RSS leaders. He says "Even now what has been happening for the last 2.5 Years with the KLF targeting rss leaders in India, it's the same thing."

He almost boasts about the RSS killings and says “Leaders of Punjab RSS, they are being shot on the street by motorcycle borne assailants. This is a reality.” 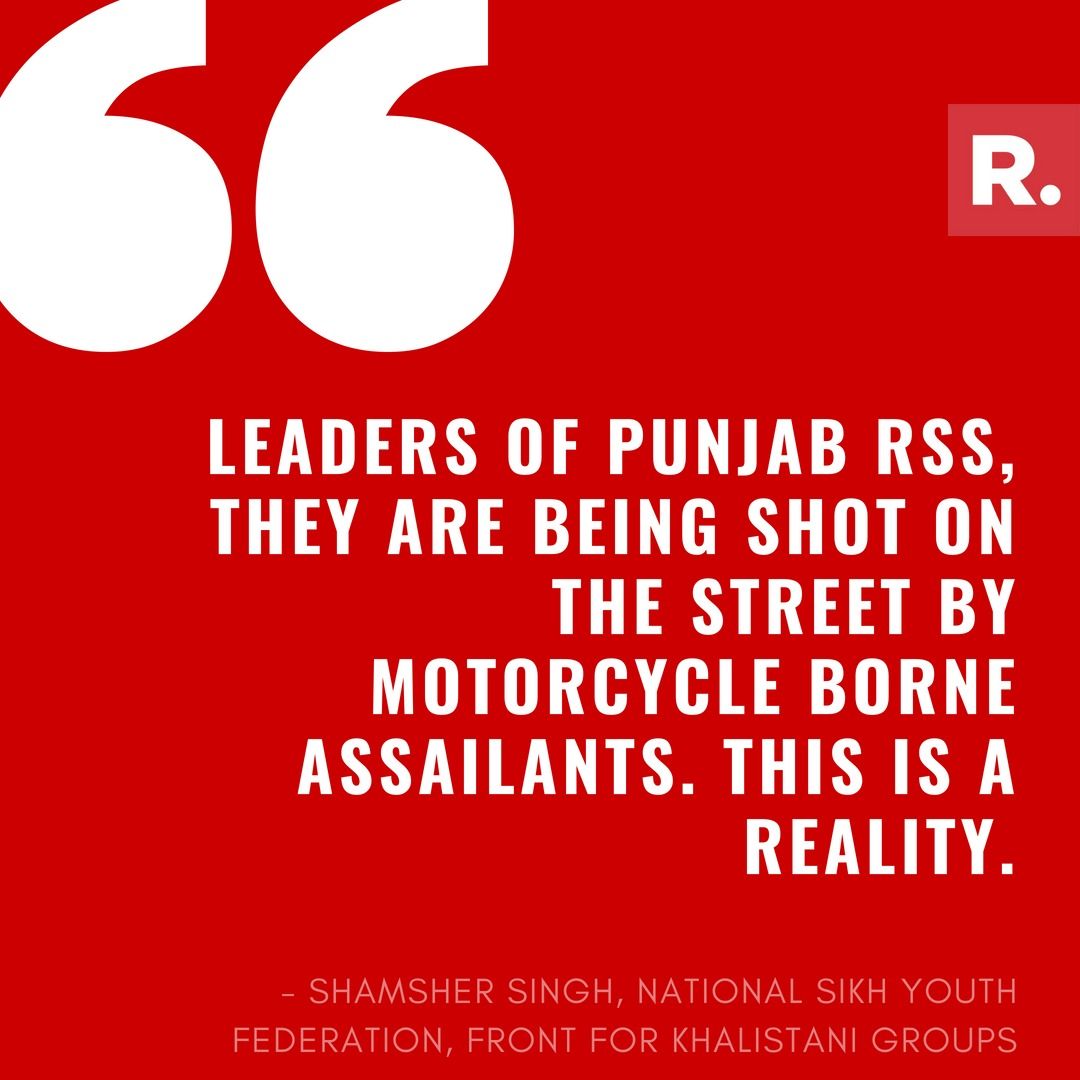 READ: ‘Yes, Khalistan Was Involved In The Killings Of The RSS Leaders’ Admits Shamsher Singh In The Sting Operation

On being questioned about the involvement of Khalistan in the killings of the RSS leaders, Shamsher Singh plainly says “Yes, Khalistan Liberation Force has admitted that they have killed”.

'Pakistan is our ally'

Shamsher Singh, is on tape, saying ‘Pakistan is our ally. And Pakistan has not committed any genocide against Sikhs.’ He goes on to assert that “Pakistan recognizes Khalistan as a legitimate nation.”

On being asked “So, it's a natural ally you would say?” by  Republic TV‘s Senior News Editor Shawan Sen, the only response of Shamsher Singh is to say “yeah, 100%” READ: 'Pakistan Is Our Ally' Says Shamsher Singh, Member Of The Front For Khalistani Groups

During the whole investigation, many such stunning and shocking revelations were uncovered. From a possible link of Pakistan in the attack of Akali leader Manjeet Singh in US to the claims that the group has killed over 2,700 people, including many PMs, CMs and Generals of the Army, in a first ever sting operation, Republic TV exposed the real face of such groups and their members.