On Thursday morning, Prime Minister Modi arrived in Japan for the G20 Summit during which he will attend important plurilateral meetings and meet with the world leaders.

On Thursday morning, Prime Minister Modi arrived in Japan for the G20 Summit during which he will attend important plurilateral meetings and meet with the world leaders.
Update at 10:45 AM
7 months ago | June 29, 2019 11:05

BILATERAL MEET WITH SINGAPORE AND CHILE

PM Modi held a bilateral meet with Turkish President Recep Tayyip Erdoğan and according to MEA the discussion focused on trade and investment, defence, counter-terrorism, IT and civil aviation.

Australian Prime Minister Scott Morrison at the G20 Summit took a selfie with PM Modi and shared it on his twitter handle.

On the second day of the G20 Summit PM Modi held a meeting with the President of Indonesia Joko Widodo.

During his meeting with Indonesian president Joko Widodo, the prime minister discussed ways to deepen bilateral cooperation in trade and investment, defence and maritime fronts.

Beginning Day 2 of the #G20 Summit by meeting a valued friend.

Towards the end of the day, world leaders participating in the G20 Summit posed for a photograph.

#LIVE on #ModiGlobalLeader | World leaders pose for group photo at the G-20 Summit in Osaka, Japan. Tune in for updates - https://t.co/LGCyJUEBn5 pic.twitter.com/Z317DbhK7y

Giving impetus to friendship with Germany.

Productive conversation with my Mexican colleague, Minister @m_ebrard on taking forward the Privileged Partnership. Look forward to welcoming him in India soon.#G20Summit pic.twitter.com/qQuOPygPPk

PM Modi interacts with World Leaders on the sidelines of G20 Summit in Osaka.

Interactions with various world leaders on the sidelines of the #G20 Summit in Osaka. pic.twitter.com/Yacp8b7wQG

After holding a trilateral meet with US-Japan, bilateral with US President Donald Trump and Saudi Crown Prince Mohammed bin Salman, PM Modi holds a meet with the President of South Korea Moon Jae-in on the sidelines of G20 Summit in Japan's Osaka. He said, "Terrorism is an important issue for all of us. Due to terrorism, innocent lives have been killed, we have to eradicate terrorism from the world. I have called for a global conference on the issue of terrorism. I hope we will work together towards this serious concern."

#GlobalLeaderModi | Terrorism is an important issue for all of us. We have to work together to eradicate terrorism from the world: PM Modi at BRICS informal meet on the sidelines of G20 Summit in Osakahttps://t.co/LGCyJUEBn5 pic.twitter.com/wVVJOjRw6M

After the 'JAI' trilateral meet, PM Modi holds bilateral meet with US President Donald Trump at Osaka on the sidelines of G20 Summit 2019.

Today’s meeting of the JAI Trilateral was a productive one. We had extensive discussions on the Indo-Pacific region, improving connectivity and infrastructure development.

Grateful to PM @AbeShinzo and President @realDonaldTrump for sharing their views as well. pic.twitter.com/FruUecBySB

The Modi-Trump meeting assumes significance as the US president, championing his 'America First' policy, has been a vocal critic of India for levying "tremendously high" duties on US products. 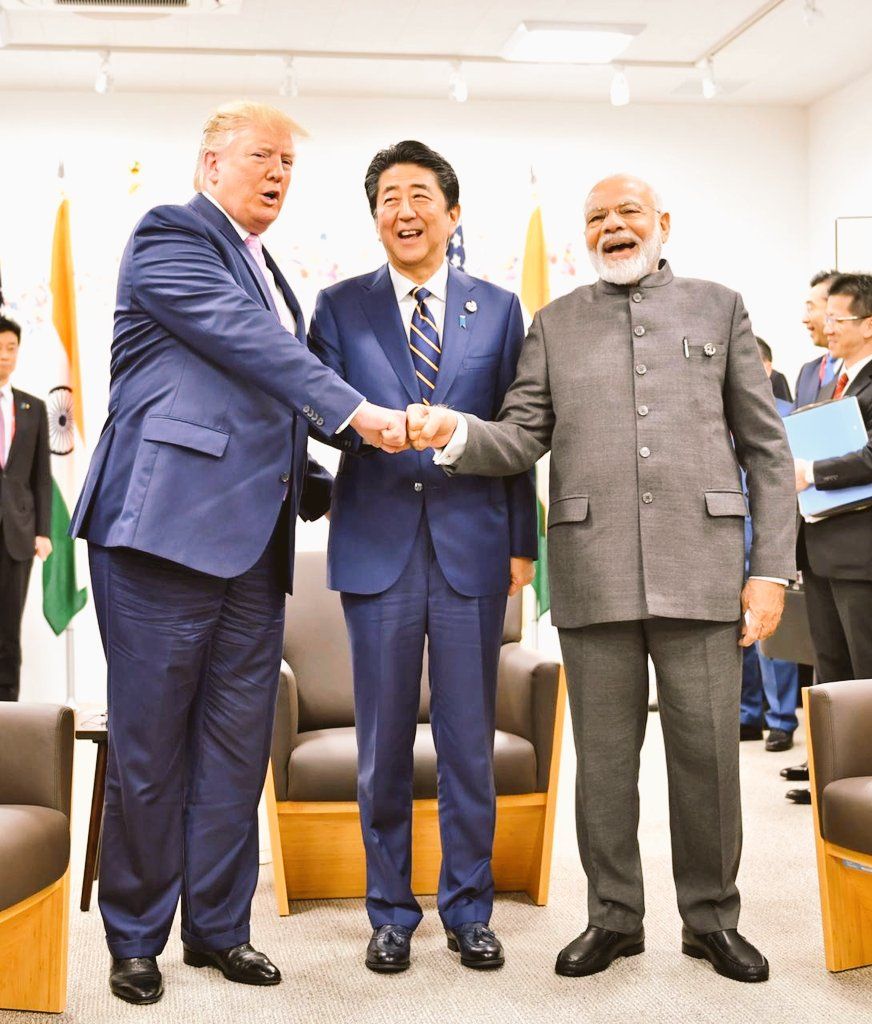 US President Donald Trump at the trilateral meeting between US, Japan & India in Osaka: Mr Modi, Congratulations on your great victory. I should say congratulations to both because Shinzo also had a great victory. You are doing a great job to your countries pic.twitter.com/JLBu85lZ34

We are dedicated towards democratic values. 2019 election was about truth: PM Modi addresses the diaspora in Osaka, Japan.

#LIVE | We are dedicated towards democratic values. 2019 election was about truth: PM Modi addresses the diaspora in Osaka, Japan.

You have also played part in India's festival of democracy, for that, I want to thank you: PM Modi addresses the diaspora in Osaka, Japan.

Tune in to watch it here - https://t.co/LGCyJUEBn5

US President Donald Trump arrived in Japan's Osaka for the G20 Summit.

Prime Minister Narendra Modi will give an address shortly. 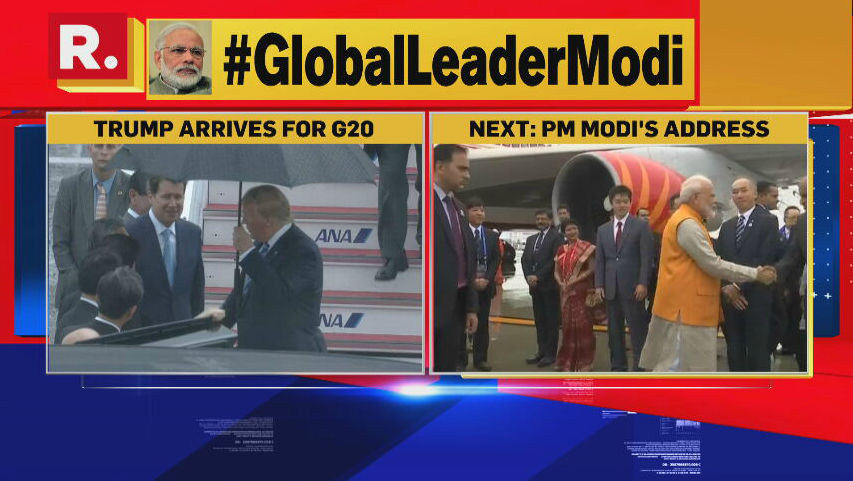 PM Modi's Japanese counterpart congratulated him for his landslide victory in the Lok Sabha 2019 elections.

He said, "Once again would like to offer my hearty congratulations to you for an overwhelming win in elections. Also, next time it is my turn to visit India and I am looking forward to my visit."

Greeting each other as best friends do!

A friendship characterised by warmth and the promise of a bright future.

Prime Ministers @narendramodi and @AbeShinzo hold talks in Osaka, the first such meeting between these leaders since the start of Japan’s Reiwa era.

Many aspects of India-Japan relations were discussed. pic.twitter.com/59CiuBHZWA

Briefing the media, MEA said that it was a warm meeting because PM Modi and his Japanese counterpart are 'old friends'. He then said that Japan PM Abe began with the expectations of the G20 meeting, including a focus on the global economy. He spoke on PM's talk on earlier G20 meetings on the fugitive economic offender and said that G 20 should find a way to tackle it as a part of anti-corruption measures. He emphasized that G 20 should come up with an idea and focus on climate change.

US President Donald Trump in a tweet said that he is looking forward to meeting with PM Modi and holding a discussion about India increasing the tariffs against the United States.

I look forward to speaking with Prime Minister Modi about the fact that India, for years having put very high Tariffs against the United States, just recently increased the Tariffs even further. This is unacceptable and the Tariffs must be withdrawn!

He will elaborate on many issues of global importance and present India’s viewpoint. pic.twitter.com/13OStvVjbn

On Thursday morning, Prime Minister Modi arrived in Japan for the  G20 Summit during which he will attend important plurilateral meetings and meet with the world leaders.

As many as 10 bilateral meetings have been scheduled on the sidelines of the two-day G20 Summit. He will be holding meetings with France, Japan, Indonesia, US, and Turkey, among other countries. India, Russia, and China are also set to hold a trilateral meeting on the sidelines of the G-20 Summit. During the two-day summit, there will also be a meeting with leaders of Brazil, Russia, India, China & South Africa (BRICS) and Russia-India-China (RIC).

This will be Prime Minister Modi's sixth G20 Summit which is being held at Osaka on June 28-29.

There will be four sessions as a part of the summit namely global economy, trade and investment, innovation in the digital economy and artificial intelligence. Other topics will include free trade and economic growth, including taxation, finance, inclusive and sustainable world, energy and environment, society quality infrastructure, global health, aging, climate change, and marine plastic waste.

Formally known as "Summit on Financial Markets and the World Economy", G-20 summit began in 1999.

During the 2018 G20 Summit, PM Modi had announced that India will play host to the Summit in 2022 when the country will celebrate 75th anniversary of independence.