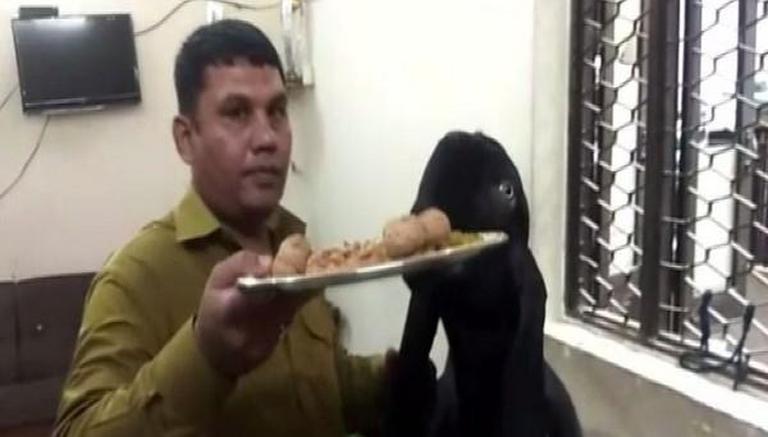 
A goat dedicated to being an 'offering' for Eid-ul-Zuha in Madhya Pradesh's Indore has become the talk of the town. Ineffably large-sized, and ready to be sacrificed, it has become an attraction for locals as they continue to visit the house of the owner to take a glimpse of it.

The owner of the black goat, Moin Khan, said that the goat weighs 175 kgs and that it is priced at a whopping Rs 5.5 lakh. The owner also said that he has been feeding the animal cashew nuts, raisins, and almonds. Talking to ANI, Khan said that the black goat is of the Punjabi breed and has been reared for 10 months now. "The goat weighs 175 kgs and its height is about 4 feet. This year, people have put the price of black goats up to Rs 5.5 lakh, but I have been rearing the goat for 10 months now and will sacrifice the animal on the day of Eid-ul-Adha," the owner said. "I have another brown goat whose weight is about 150 kgs," he added.

Ban on cow and camel sacrifice in Uttar Pradesh

Meanwhile, in Uttar Pradesh, the government has banned the slaughter of cows and camels on Eid-ul-Adha. Muslims preferring goats, sheep, and buffalos for the sacrifice seem to have faced discontent. Islamic followers in areas like Salempura, Medanpura, Jallaluddinpura, and Dhannipura in Uttar Pradesh’s Varanasi had an old custom of camel sacrifice as well. The custom halted as the government banned camel sacrifice in 2019.

The holy festival of Eid-ul-Zuha, also known as the 'festival of sacrifice' or Greater Eid, is celebrated on the 10th day of Dhu-al-Hijjah, the 12th month of the Islamic or lunar calendar. Also known as Eid Qurban or Qurban Bayarami, it marks the end of the annual Hajj pilgrimage. Eid-ul-Zuha is the second Islamic festival of the year and follows Eid-al-Fitr, which marks the end of Ramadan, the holy month of fasting. Eid al-Adha is called Id-ul-Adha in Arabic and Bakri-Eid in the Indian subcontinent, because of the tradition of sacrificing a goat, or 'bakri'.