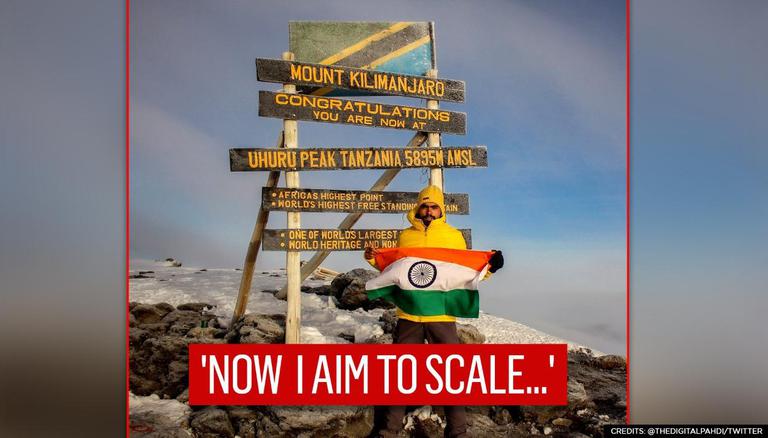 Mountaineer Nitish Singh from Gorakhpur, Uttar Pradesh has unfurled the national flag Africa’s highest mountain, Mount Kilimanjaro. As per news agency ANI, Singh unfurled the tricolour at the mountain on January 26 at around 6:50 AM. He even took to Twitter on Sunday and wrote, “With the blessings of all of you, on January 26, Republic Day, at 6.50 am, the pride of India hoisted the tricolour on Mount Kilimanjaro, the highest peak of the continent of Africa. With the support of all of you, the name of the country, state and Gorakhpur has been elevated at the international level.” He now plans on scaling several other highest peaks across the globe.

“People have supported me to overcome difficulties. Now I aim to scale the top seven highest peaks of the world," said Nitish Singh who was welcomed by his friends and family with unmatchable zeal and zest.

"People have supported me to overcome difficulties. Now I aim to scale the top seven highest peaks of the world," he said. (01.02) pic.twitter.com/PuJI9gFG1B

While Gorakhpur's Nitish Singh became the 'pride' of the nation on the Republic Day, a team of 10 Nepalese climbers on January 16 made history by scaling the world’s second-highest peak in the winter season. At 28,251 feet, Pakistan’s K2 is the most prominent peak of the Himalayan range and it has never been reached in winter due to weather and geographical difficulties. According to Associated Press, the winter winds at the second tallest peak after Mount Everest can blow at more than 200km per hour and temperatures can drop to minus 60 degrees Celsius.

However, even after facing such difficulties, Mingma Gyalje Sherpa, Nirmal Purja, Pun Magar, Gelje Sherpa, Mingma David Sherpa, Mingma Tenzi Sherpa, Dawa Temba Sherpa, Pem Chhiri Sherpa, Kilu Pemba Sherpa, DawaTenjing Sherpa, and Sona Sherpa reached the top of the peak. The secretary of Pakistan's Alpine Club, Karrar Haideri, lauded the group for their achievement and said that this has never been done by anyone before in winter. Purja Sherpa also took to Instagram and shared the image of the team at the Summit and wrote, “Impossible made possible”.