The Hanuman devotte from Ayodhya named Arunveer Singh said that Raj Thackeray's recent statement on the issue of 'Hindutva' has pleased many. 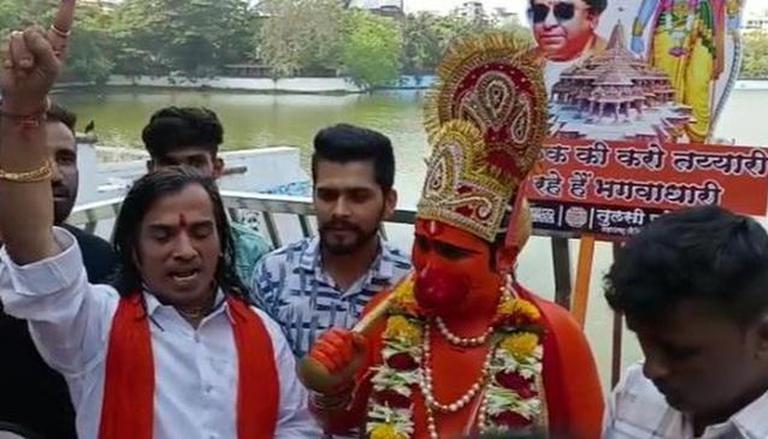 
A Hanuman devotee from Ayodhya, who travelled to Maharashtra for supporting MNS leader Raj Thackeray was detained by state police in Thane on April 12. Painted completely in saffron colour while donning a crown, jewellery, a garland and a mace, the devotee arrived at Thane to attend a meeting today. Named Arunveer Singh, the Ayodhya-native stated that Raj Thackeray's recent statement on 'Hindutva' has pleased many.

As for Singh, he was taken to the Gadkari Rangayatan performing arts theatre in Thane as his costume was attracting too much of the crowd's attention.

When asked about his attire, Arunveer Singh claimed that he dressed this way because he is a devotee of Lord Hanuman. "The entire country is celebrating Raj Thackeray's move of raising the Hindutva issue. Tulsi Bhai Joshi is a friend of mine and he used to tell me stories about Raj Thackeray sahab. Then I started following Raj Thackeray as well," Singh said. He further revealed that he left for Thane after booking train tickets a couple of days earlier.

Informing about the scenario regarding Thackeray in Ayodhya, Arunveer Singh said, "not only Ayodhya but entire India is talking about Raj Thackeray". Answering if the MNS leader should follow Uttar Pradesh Chief Minister Yogi Adityanath's footsteps, the devotee said, "yes, that should definitely happen."

The outspoken Raj Thackeray has not held back in taking shots at the Maharashtra Vikas Aghadi (MVA) and even at NCP chief Sharad Pawar over the political developments in Maharashtra. While his cousin Uddhav Thackeray is positioned as the Chief Minister in the state, Raj Thackeray had recently targeted Pawar over 'casteist politics.' "If we don't come out of the caste politics now, how will it become Hindu? Which flag of Hindutva will we hold?" he asked.