The Grain ATMs will provide relief to the residents who wait in long queues to get their ration outside the government depots, Haryana's Deputy CM stated. 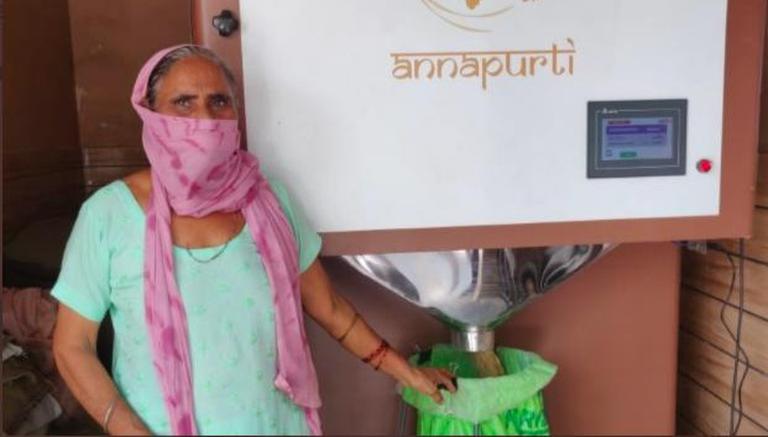 
Haryana's Deputy Chief Minister Dushyant Chautala on Wednesday announced that the government has set up India's first-ever 'Grain ATM' as a pilot project in Gurugram. The newly installed machines can dispense approximately 70 kg of grains in five to seven minutes' time. The ATMs will provide relief to the consumers who wait in long queues to get the ration outside depots, Haryana's Deputy CM, will also undertakes various responsibilities at the Food, Civil Supplies, and Consumer Affairs Department, told reporters on July 14.

The grain machine is equipped with biometry and a touch screen, any error in the measurement of grain is negligible. The residents are required to enter the Aadhar Card or Ration Card unique number, following which, the machine will dispense the quantity of ration [wheat, rice, or millet] as allocated by the Haryana government per individual family in the respective food bag designated at the ATM machine.

"The purpose of installing this machine is to ensure that the right quantity should reach the right beneficiary with minimum hassle," Haryana's Deputy CM said, according to PTI.

The pilot project comes just a month after the Haryana government launched a scheme to provide the FMCG products to the needful citizens at affordable prices at the ration depots.  Launched in Sirsa, Fatehabad, Karnal, Yamunanagar, and Panchkula districts, the ambitious project also enables the residents to avail services from the State Bank of India (SBI) with the assistance of their local depot-holders.

"I am sharing with great pride that the country's first food grain ATM 'Annapurti' has been started from Gurugram district of Haryana. Its objective is to make the distribution of food grains available in various government schemes easy and transparent," Haryana's deputy CM wrote in a tweet on July 14.

On Wednesday, explaining the operation of the Grain ATM, JJP leader and the Deputy CM of Haryana Chautala reportedly stated that an automatic machine works similarly to a bank ATM and is also referred to as an Automated, Multi Commodity, Grain Dispensing Machine. It is installed under the ‘World Food Programme’ of the United Nation.

"This machine will be installed under the ''World Food Programme'' of United Nations and is called Automated, Multi Commodity, Grain Dispensing Machine,” a statement by the Haryana government as cited by PTI, read.

As the pilot project has kicked off, the government will now be able to redress complaints related to the right measurement of ration quantity and the time that it takes, availed by the eligible beneficiaries. The installation is expected to reduce the complaints of shortage of food grains at the government ration depots giving the public food distribution system more transparency and will save time for the depot workers in distributing the food grains manually. The ATM Grain pilot project, which is operating wheat dispensing at Farrukhnagar in Gurugram, if proven successful, will expand statewide, the Haryana Deputy CM said.

WE RECOMMEND
Haryana lockdown extended till July 19; here's a list of what is allowed and not
Haryana CM chides Kejriwal over water-sharing row, says 'Delhi CM has PhD in lying'
NGT pulls up Haryana govt on overflowing sewer on Agra Highway; warns of 'coercive' action
Khattar says Maruti's plant not shifting out from Haryana, targets AAP on water issue
Haryana Minister Anil Vij suggests Navjot Sidhu to form his own party amid Punjab crisis